Marx & Philosophy Review of BooksReviews‘Critical Theory at a Crossroads: Conversations on Resistance in Times of Crisis’ by Stijn De Cauwer (ed) reviewed by Jeremy Bell 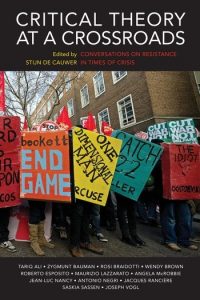 Stijn De Cauwer (ed)
Critical Theory at a Crossroads: Conversations on Resistance in Times of Crisis

Jeremy Bell has been published in Cultural Politics, Feral Feminisms, and elsewhere. His work …

In Critical Theory at a Crossroads: Conversations on Resistance in Times of Crisis, Stijn De Cauwer draws together twelve conversations with prominent contemporary critical theorists, all looking at the role of ‘crisis’ not just for critical theory itself, but how it is mobilized by media and government in public discourse. Despite its ubiquity, the contributors agree, the notion of crisis is rarely questioned. Examining topics ranging from Brexit, the financial crisis of 2008 and the rise of right-way populism to the longer-term effects of the Arab Spring, the Occupy movement, SYRIZA in Greece and Podemos in Spain, the relative heterogeneity of these phenomena are acknowledged, even as their continuities across broader platforms of class, oppression and coercion are as well. This is acknowledged explicitly by De Cauwer in his insightful introduction. ‘The prime challenge for the Left’ he explains, ‘will be in finding a way to combine local organizing, decision-making and embeddedness with the formation of transnational alliances into a more global movement with clear demands shared by heterogenous local groups’ (xxxiv). Through these interviews, no specific interpretive framework is used throughout, and nor could there be. Where some of the discussions are more theoretical, others focus on current events; where some respondents remain faithful to the established traditions of Marxism, others take up the mantles of posthumanism and deconstruction. Indeed, as De Cauwer asks: ‘What political action should be undertaken to counter the huge problems that some try to frame by calling them a “crisis”?’ (xxii). Needless to say, there are no easy or simple answers.

As we might expect, perspectives differ even as the question itself remains crucial. Jean-Luc Nancy, for example, observes how ‘the notion of “crisis” entered its very own crisis (la mise en crise de l’idée de crise)’ (161). Observing the medical origins of the concept of crisis as denoting the point at which a symptom reveals itself, he looks at the ways Christianity was a response to the crises of Antiquity. Our current crises entail the collapse of a theological and otherworldly infinite alongside the spirit of enterprise emergent with the Roman world, he says. Perhaps problematically, Nancy suggests that Islam’s inability to separate religion and state has left it in a condition of immobility. Indeed, the West for Nancy, as well as technology and capitalism, are not just synonymous, but inescapable. Looking at terrorism and violence, he suggests rather elliptically that we can only challenge violence with the counter-violence of love, charity and communication. Rosi Braidotti, like Nancy, sees these crises as productive, even as she instead emphasizes a rejection of the hypocrisy of humanism. Critical theory is or must be posthuman for Braidotti. For as she explains, ‘the idea of critical theory as detoxing us from stupidity and untruths, clinical and critical, is crucial’ (26). Reiterating a Deleuzian radical immanence, she says we must reinvent critical theory through the omnipresence of these crises, to which we much respond both crucially and creatively.

For Jacques Rancière, on the other hand, our goals must be more modest. Noting how the current discourse of secularism is mobilized as a covert form of racism, particularly in France, he also considers the betrayal of the ideals of the Left by the French Parti Socialiste. Arguing that the parliamentary system has itself reached its limits, Rancière remains hesitantly hopeful with groups like Occupy. For emancipation to occur, we must organize along principles of both equality and imagination he says. Indeed, for Rancière ‘crisis’ is just another name for capitalism. Antonio Negri is no more optimistic. ‘Today,’ he explains, ‘the situation being as it is, there is no possibility for a state to break with the European Union […] The European Union is a cage’ (87). Of course, the question of not just Brexit, but the European Union in general looms large throughout these discussions. Tariq Ali, for example, compares the European Union to a dysfunctional family, with its children – Greece, Portugal, and Ireland – living in continuous fear of economic beatings. It is undemocratic and should be abandoned he argues. The concession of SYRIZA to the European Union and the consequent attenuation of its power was a disaster, not just for Greece, but for the Left generally according to Ali. He also considers the disappointing long-term results of the Arab Spring, and the political vacuum that Islamist and jihadi groups came to inhabit since the uprisings.

For Negri, these are questions of horizontality and their relation to vertical axes of power. Alternatives must be sought, he says. ‘The task today is to develop forms of power without sovereignty’ (92). Maurizio Lazzarato, on the other hand, criticizes both Rancière and Negri alike for not developing a more specifically economic politics of capital and of debt. ‘What we need’ Lazzarato says, ‘is a political form of organization that can not only effectively answer war and finance, but also develop the multiplicity of different political movements’ (139). Indeed, it is economic and military paradigms that he sees as most pressing. Looking at the long-term difficulties, for example, of supressing groups like Al-Qaeda and ISIS in Iraq and Afghanistan, he uses Foucault to articulate what he calls ‘a governmentality of war’ (136), wars that now fight populations rather than states. Lazzarato is sceptical of the effectiveness of parliamentary politics for enacting real social change, also noting the concessions of SYRIZA and Podemos. Both war and global financial markets entail the development of new political forms he argues, comparing the successes of the Right and neoliberalism to the Left’s myopia toward innovative political formations. Such observations are repeated in the interview with Angela McRobbie, even as she criticizes Lazzarato and others for their failure to recognize the persistent divisions of class that continue to haunt new social movements.

In his introduction, De Cauwer observes that most of the interviews were conducted in 2016, before the election of Donald Trump, and hence do not address it directly or specifically. It is interesting to note how, despite the changes that have resulted since 2016, the immediate ‘crises’ that Trump appears to have embodied appear, if not softened, then generalized in a way well-beyond his personality, into the more wide-ranging shifts globally toward populism and the Right. Indeed, the dangers ahead are more problematic than any specific presidential Twitter statement could possibly be. Surely it is not necessary to immediately become disenchanted with the longer-term efficacy of specific social movements either. For even if the momentum of the anti-globalization movement two decades ago in Seattle or Genoa appears to be have been quashed, do we not see its continuation in movements like Occupy or even more contemporary contexts? While this review is being written, for example, unprecedented numbers of deeply horizontal and anonymous protesters are gathering in Hong Kong to resist legislation allowing the extradition of its inhabitants to mainland China. In fact, they have effectively changed the decision, tabling it indefinitely while continuing voice their dissatisfaction. Are they learning from previous social movements? Surely, just as they are also addressing the changing social and political realities of our world today.

Besides discussions with Nancy, Braidotti, Rancière, Negri, Ali, Lazzarato and McRobbie, Critical Theory at a Crossroads also includes discussions with Joseph Vogl, Saskia Sassen and Wendy Brown, as well as a 2014 letter exchange between Roberto Esposito and the late Zygmunt Bauman on ‘community’. It is easy to see how the wide range of topics and points of view are not easily classed under simple headings such as philosophy, sociology or even Marxism. In fact, it seems only euphemistically that we call these discussions ‘critical theory’, even as the seminal contributions of the Frankfurt School must be acknowledged. Still, so too must we not ignore the insights of the Situationists, the Italian Autonomists, Black Lives Matter, #MeToo and many more theories, practices and movements besides, both historically and in contemporary contexts. In this respect, whether one’s interests are in contemporary social movements, politics, critical theory or Marxism, De Cauwer’s collection is invaluable reading for not just the crossroads but the crises ahead.