Marx & Philosophy Review of BooksReviews‘Epicurus, and the Origins of Historical Materialism’ by Diego Fusaro reviewed by Tom Rockmore 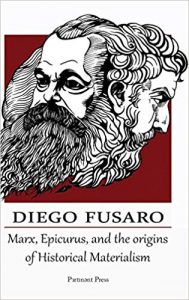 Diego Fusaro
Marx, Epicurus, and the Origins of Historical Materialism

Diego Fusaro is a much-published young Italian scholar of Marx and Marxism, who has previously written about Epicurus (Fusaro, 2006) and numerous other themes. His recent book, Marx, Epicurus, and the Origins of Historical Materialism, stresses the role of Epicurus for Marxian materialism against the background of Althusser’s aleatory materialism. ‘Aleatory’ roughly means ‘chance’ or ‘random.’ According to Althusser, who developed ‘aleatory materialism’ near the end of his career, this term is triply significant: it provides Marxism with a philosophy; it identifies this philosophy with Epicurus and Democritus; and it provides a standpoint from which the crisis in Marxism would gain in intelligibility.

Fusaro’s work centers on Marx’s relation to Epicurus. He thinks that we need to add Epicurus to the three main traditional influences on Marx (classical German philosophy, French socialism and English political economy). According to Fusaro, under the influence of Epicurus, Marx formulates ‘a [so-called] materialism of freedom’ that derives from ‘the importance of praxis and is represented by the doctrine of clinamen’ (3). Clinamen is the early Greek thinker’s term ‘for the random processes of aggregation and disintegration of matter, the atoms’ aleatory disintegration’ (3). According to Fusaro, apart from Althusser, there is little, in any case insufficient discussion about the relation of Marx and Epicurus in the massive Marxian debate. Fusaro’s double aim is to shed light on a neglected but significant Marxian source and to describe its considerable influence on the formulation of Marx’s philosophy.

The book is divided into an introduction, a conclusion and nine chapters. Fussaro’s study turns on his creative reading of Marx’s dissertation as an early but central influence on the path leading to Marx’s mature position. One could wonder if Marx’s account of Greek atomism is central, in any case of more than minor significance for his later writings. Fusaro seems to have little doubt in this regard. In chapter 1, ‘The Context of the Dissertation on Democritus and Epicurus,’ he makes two important claims: for Marx, Democritus and above all Epicurus are the two most important ancient Greek thinkers, and the dissertation Marx is already anticipating the future break with Hegelianism. Fusaro, who misses no opportunity to stress the importance of Marx’s view, remarks in passing and without argument of any kind that the view that Greek thought culminates in Aristotle and Plato is misleading (54). In chapter 2, ‘The Contents of the Dissertation (1841)’, he argues that Marx correctly prefers Epicurus to Democritus. The reason is clear. The latter is concerned with scientific needs but Epicurus’ philosophy is useful for human freedom and ethics. The remainder of the book studies the contribution of Epicureanism to the genesis of Marx’s position.

In chapter 3, titled ‘Philosophy becomes World: a Draft of a Philosophy of History,’ Fusaro suggests that Marx’s dissertation is much more than a simple academic exercise, specifically by pointing out that each of Epicurus’ interests is anthropocentric. He supports this view in useful remarks on the views of Cornu, Cingoli and Rossi. Chapter 4 takes up ‘Marx, Epicurus and the Critique of Religion.’ Fusaro here depicts Marx as steadily committed to the anti-religious view that mankind is the supreme essence for mankind. According to Fusaro, Marx takes over from Epicurus the latter’s anti-religious critique for the importance of man for man. Chapter 5 describes the path leading ‘From Atomistic Materialism to Consumerism: The Holy Family.’ Fusaro here suggests that although Marx later went on to discuss other topics, the lessons and themes tackled in the dissertation continue to run throughout his later writings. In passing, Fusaro, who forgets that his official theme is the influence of early Greek philosophy of nature on Marx, devotes two pages to Engels’ views of ancient materialism in Anti-Dühring. In chapter 6, ‘Democritus and Epicurus in The German Ideology,’ Fusaro argues that the two Greek atomists, or at least Epicurus, remain centrally important in Marx’s writings after the dissertation. Fusaro, who argues for this point in remarks on The German Ideology, once more forgets that his central theme is Epicurus’ influence on Marx as a central source of historical materialism. He now claims that Marx and Engels save Democritean materialism from Stirner’s misunderstandings (114). Chapter 7 takes up ‘The Subordination of Science in Marx and Epicurus.’ For Fusaro, Epicurus’ superiority to Democritus lies in his appeal to science to achieve extra-scientific goals, more specifically to rely on physics to attain happiness (119). In passing, Fusaro, like Althusser, argues that Marx later becomes a scientist, that is, committed to the science of socialism (125). In chapter 8, titled ‘A Society of Atoms’, Fusaro points out Marx’s rejection of Epicurean radical individuality. According to Fusaro, the atomistic model combines a radical materialism of history to deny the influence of the divine on the human with the responsibility to act (135). In chapter 9, ‘Interpretation of the Clinamen theory,’ Fusaro argues that Marx prefers the Epicurean materialism of freedom whose possibility rests on the theory of clinamen. At stake is the idea that circumstances transform men, but men must transform circumstances (147). Fusaro uses the occasion to provide remarks on Althusser’s two analyses of Marx’s theories of production. In the short ‘Conclusion,’ Fusaro makes two points: the roots of Marx’s materialist conception of history lie in the atomism of Democritus and Epicurus, and that the latter is rightly considered the fourth main source of Marx’s thought.

This book will be most useful for those interested in the genesis of Marx’s theories. It will be most helpful for those concerned with the step by step development of Marx’s position, for instance those who might wonder what role Marx’s very early philosophical writings, specifically his dissertation, still plays in his mature position. Fusaro’s answer seems to be that with a little creative interpretation, it becomes plausible, on the assumption that even the very young Marx was already predisposed to a large number of doctrines, to see significant items in Marx’s position as either originating in or least influenced by his early attention to ancient Greek philosophy of nature. If Fusaro is to be believed, then many widely known later Marxian doctrines, including humanism, historicism, materialism and so on, should be seen as already present, in at least preliminary form, in Marx’s dissertation.

In that sense, this short book will prove valuable. Yet it would have been more helpful if it were longer. Fusaro succeeds in shedding light on Epicurus as a neglected Marxian source at the price of constant simplification and unfortunately with little or no pretense of objectivity. The result is an extreme example of a reductive reading of Marx’s theories from the present to the past wholly within the overall orthodox Marxist framework.

Fusaro seems best at depicting how Marx’s later views are anticipated in various ways in his very early writings. That is a standard interpretive approach. The later ideas of anyone can always be traced back to earlier anticipations. Yet it is important to avoid the temptation to reduce a theory, any theory, to its origins. For the result is a conceptual indulgence, typical of Marxism, that accepts claims without analysing their meaningfulness.

Some examples would also have been helpful. Fusaro unfortunately makes no effort to understand ideas in their context. What, for instance, did ‘materialism’ mean when Marx was active? Fusaro uses the term in the usual ontological sense. Although he has written on Fichte and Marx (Fusaro, 2013), he never mentions the Fichtean epistemic view which, when Marx was writing, was an important alternative to the ontological view of materialism.

The book directly or indirectly raises a series of obvious questions whose answers are not obvious at all. How does materialism relate to idealism? What is Hegelian idealism? To what extent and in what way does Marx break with Hegelianism? Is Marx’s position consistent or inconsistent with materialism? Is Hegel right that the difference between idealism and materialism is not significant? In what sense is socialism scientific? There is further no effort to discuss, nor to otherwise justify, the fantastic claim that the ancient tradition reaches its peak, not in Plato and Aristotle, but rather in Epicurus and Democritus. In short, Epicurus, and the Origins of Historical Materialism, although useful, could, with a little more work, have been very useful.