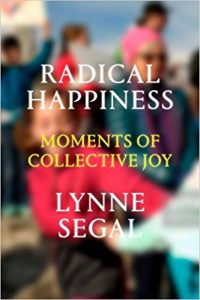 Lynne Segal’s recent work addresses some of the most personal problems of everyday people, and the vast majority of scholars; living under the conditions of late capitalism. Namely, the work seeks to tackle the concept of happiness in its definition, application, and increasing lack of presence in most of our lives. To this end, the work is a refreshing take on, and situation of, love and happiness into several literatures and spheres that gives readers a lot to chew on intellectually and personally. Radical Happiness is more than worth a read for those concerned about the state of themselves and others in the world, both inside and outside of the scholarly literatures cited by the veteran feminist scholar, though it does have a few rather curious blind spots in terms of other relevant philosophies of love.

In general terms, the work can be seen as something of a diagnosis for the general lack of happiness in the modern era, in particular the increasing trends of depression, anxiety, and other sorts of melancholia that appear to be endemic to contemporary life in capitalist, democratic countries. Segal thus spends many pages defining the concepts and contexts of love, joy, happiness and a few other relevant ideas that will be covered more shortly in a general summary. Broadly speaking, the work seeks to take a brutally honest, if sometimes emotionally difficult, look at our lives under late capitalism in an attempt to work out why so many of us lack happiness in our lives.

Opining about happiness and love, or their relative lack, is, of course, nothing new in the realms of literature, philosophy, art, or basically any other human endeavor. With that said, Lynne begins to develop an interesting methodological tack in this work: the author attempts to, and largely succeeds at, placing happiness within the broader intellectual paradigm of international political economics (IPE), linking them to debt and the creation, and breaking, of economic norms under late capitalism. This development alone is worthy of praise: it is even more impressive given that the author avoids the temptation of many scholars of IPE and instead maintains that this work is, at its core, about human lives and their relation to economic forces, rather than about a-personal humans who could be mistaken for sanitized points of data rather than our friends, family, and selves. Thus, the work tries to maintain one foot in political economics, and the other firmly in the humanities. That balance in academic work is both rare and refreshing. With that said, it is somewhat curious that the work does not address Fromm’s Art of Loving, considering how clear his methodological lineage is here, as well as the relatively surface dismissal of Foucault.  Those critiques, and a few other minor points, will comprise the final section of this review. But, first, taking a look at each of the chapter’s argument’s make the case of the book, and its worthy project, clearer.

The preface of the work begins to outline the major puzzles that drive the work. Specifically, our happiness, a thing that is tied to our place in and expectations out of the world seems to be in somewhat short supply lately (vi) and that governments seem to be taking a keen interest in figuring out that lack of happiness, which at first seems odd (x). These oddities exist, she argues, situated in a more complicated emotional field than capitalistic, transitional analyses allow, and is, in fact, a deeply social problem that must be understood in the interplay between the public and private.  The opening chapter of the work presents her general theoretical premise, namely that the modern concept of happiness is one bound within capitalist discourse and that the skyrocketing inequality of recent decades, combined with wars, personal struggles, etc. has created both a happiness industry meant to sell us products/treatments as well as increasingly unhappy people, as the utopian promises of late capitalism continuously fail to come to life. This IPE framework is a particularly compelling one that challenges several narratives. First and foremost, the book stands as a challenge to the idea that mental health struggles are the result solely of some individual moral failing- Segal rightly points to Weber in The Protestant Ethic and the Spirit of Capitalism as one of the wellsprings of this kind of thinking. Similarly, the framework proposed creates a bridge between IPE and feminist theories of politics and steadfastly wedges the personal within the political by centering humanity within discourses of economics.  Chapters two through three leave the framework of the book as a whole somewhat in the background as the author gives nonetheless interesting conceptual histories of happiness, depression, love, and joy. These chapters are more committed to the intellectual bridging began in the first chapter, and richly cite literatures from economics, sociology, psychology, and refreshingly, fiction in the form of poetry, plays, and relevant narratives. These histories borrow somewhat from the tradition of the post-structuralists as they led into third wave feminist scholarship: in order to disentangle and dismantle the capitalist structures that harm most of us, we need to better understand where the logics of those structures originated.

Moving past those conceptual histories, chapters five through seven devote themselves to examining particular modes of thinking and practices that may either give us trouble, or a light by which to guide further actions toward happier lives. Recommending that we stray away from the practices of things like the hyper-commodification of online dating and instead use utopian thinking as a means by which to ask what could be otherwise in a more solidaristic fashion, Segal is at her most inspirational in these chapters. Especially interesting is her clever positing that we seem to have embraced dystopian thinking, so why not use utopia as it was intended, as a tool by which to challenge things as they are? A final chapter and the afterword bring the IPE analysis from the opening chapters back to the fore: the postwar welfare state has failed to achieve a society wide state of happiness and, if we are to hope to work towards one, solidarity and non-capitalist practices may be one of the only viable paths.

The project undertaken by Segal is an ambitious one and is moderately successful in its execution. The general idea, that the analyses of IPE can be fruitfully applied in an attempt to explain the phenomenon of anxiety, depression, and general melancholia that takes up so many of our lives, is a novel and refreshing approach that seeks to shake dominant paradigms of study and practice. Additionally, the conceptual histories of the book are themselves interesting and well written, providing both food for thought and reading recommendations that will keep book fiends satisfied for months. But with that praise must come a few words of critique. Many of the middle chapters of the book do not clearly identify themselves within that IPE framework presented in the chapters that bookend the work. This could be fixed with minor edits in the introductory and concluding segments of those chapters. Additionally, it is somewhat puzzling, given the book’s conclusions that the individual lives as a member of a group, and the implication that those people in those groups should seek to foster love, that Segal did not deal with Fromm in Art of Loving, as the two share both historical materialism and the desire to improve human life.  While Segal innovates on the mostly psychological explanations of Fromm, the implications are similar. Where Fromm argues that we have to take care of ourselves before we experience love, Segal comes to the conclusion that the self is not the sole bearer of blame for general unhappiness. The discussion between the two could be fruitful, coming to a praxis that is limited in this work. Similarly, the sheer scale of the market forces that create (un)happiness that we see working against us would have been all the more fleshed out through the Foucauldian concepts of biopower and panopticons. Specifically, Foucault as he is found in both Discipline and Punish and, perhaps more apropos of this book, his famous History of Sexuality, outlines the means by which we learn who we are, and, if updated, perhaps how we learn to be forever unhappy when compared to an ideal that simply can never be under a late capitalist economy of power. It is at the intersection of those macroeconomic forces and those micro hierarchies of the institutions such as the family, school, and work that, if Segal is correct, our unhappiness lies. Segal’s work focuses largely on the macro processes; a mention of Foucault on the micro level would have been useful in presenting a more complete picture of the conditions under which contemporary happiness and unhappiness are constructed and lived.

Overall, Radical Happiness would be of some utility to several groups of people. First, academics researching IPE could do well to consider this work in a graduate seminar, as it expands in a feminist direction what counts as political economics, something from which the discipline could greatly benefit. Second, graduate students interested in the state of contemporary melancholia, a theme common to myriad studies, dissertations, and general thinking of the last decade or so, will find much of interest here. Such groups will also come to appreciate the very well-done notes and index sections, the mark of a careful editor willing to put in the hard work of making the lives of researchers bearable. The book is written clearly enough for both undergraduate students and the literate general public, but the author does assume that her reader is fairly experienced in the canon of Western philosophical thought, economics, and current world events. This is a timely work and for its sheer pertinence to the majority of us, should be widely read and shared.