Marx & Philosophy Review of BooksReviews‘Into the Tempest: Essays on the New Global Capitalism’ by William Robinson reviewed by Pete Green 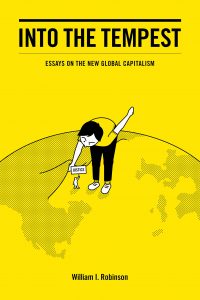 William Robinson
Into the Tempest: Essays on the New Global Capitalism

Since the early 1990s, William Robinson has been a path-breaking advocate of what he himself terms ‘Critical Globalisation Studies’, the title of the second chapter and the guiding theme of this new collection of essays. Several of these essays have been previously published and updated for this project which is aimed, according to the introduction, at ‘a broader intellectually and politically engaged public audience’ (3).

The opening chapter ‘Globalisation: Nine theses on our epoch’ was originally published in 1996 but has acquired a more emphatically apocalyptic tone here with its depiction of what he terms a ‘world war’, or ‘… a war by the global rich and powerful minority against the global poor, dispossessed and outcast majority’ (10). The title of the book derives from Shakespeare’s play The Tempest, seen as an allegory for ‘the breakdown of the reigning social order’ (4).

The use of the term ‘Critical’, in the second chapter, has a triple reference. One, Robinson is critical theoretically of persistent nation-state centric approaches to contemporary capitalism. Two, he highlights repeatedly the contradictions and destructive effects of the process of capitalist globalisation. Three, he struggles for social emancipation and ecosocialism through demanding engagement with resistance to capitalist globalisation from other scholars. This chapter also includes a short section on ‘epistemological ground rules’ (43) in which he calls for a dialectical approach drawing on Bertell Ollman’s work on ‘internal relations’. In particular, he emphasises that the three axes of inequality (class, race and gender), ‘may be analytically distinct …yet are mutually constitutive of each other as internal elements of a more encompassing process.’ (45).

A revealing interview from 2017 serves as an appendix to the book. Here Robinson refers to his formative experiences as a student in East Africa, followed by work as a journalist and participant in the Nicaraguan revolution of the 1980s, which led him to question prevailing theories of dependency and imperialism. His turn to academic study in the US resulted in detailed investigations of economic and social transformations in Latin America, the most recent of which is Latin America and Global Capitalism (Robinson 2008). Robinson justifiably complains that his many critics have ignored this empirical work that supports his central thesis of the emergence of a transnational capitalist class. However, there are only a few traces of this work in Into the Tempest.

There are, however, two trenchantly argued essays which develop the central claims of A Theory of Global Capitalism (Robinson 2004) and confirm Robinson’s status as the most effective critic of Marxists who remain attached to a nation-state centric paradigm. The arguments are also helpfully summarized and updated in the final chapter, written in 2017, ‘Reflections on a brave new world’.

Robinson claims that whilst capitalism has always been a world system, the crisis of profitability in the 1970s impelled a sustained process of restructuring and the emergence of a qualitatively new stage of global capitalism. This was not just a matter of the mobility of financial capital and liberalisation of trade. Most fundamentally ‘national production systems have become fragmented and integrated externally into new globalised circuits of accumulation’ (209), a process facilitated by new technologies. The circuits are controlled by transnational corporations (TNCs) but through expanded supply chains, with multiple layers of subcontracting and outsourcing, integrate many smaller firms and farmers.

He goes on to develop that this new stage has witnessed the expansion of a transnational capitalist class (TCC) as the primary agent of the process. This new global ruling-class, evident at the World Economic Forum in Davos, has easily absorbed a growing layer of billionaire representatives from so-called developing economies such as the Mittals from India and Carlos Slim from Mexico, along with technocratic elites and state managers. He acknowledges that this is not a unified group, and that there is ‘fierce competition among oligopolist clusters’ (70). The evidence for the emergence of a TCC, conscious of its identity as a class with a shared transnational and neoliberal agenda, is certainly persuasive. However, as Robinson acknowledges, there is a lack of attention in this earlier work to the political tensions over that agenda within the U.S. itself.’

Finally, and most controversially, Robinson argues that we are seeing the emergence of a transnational state. His critics claim that this implies that the nation-state is becoming irrelevant, but Robinson dismisses this as a misreading. Nation-states continue to perform a whole number of essential functions for local and transnational capital. However, that does not entail that TNCs are so attached to particular states that they pay their taxes and maintain their investments regardless of costs and profitability. What is occurring is a dual process in which nation-states themselves have been restructured to meet the requirements of TNCs, whilst new supranational institutions such as the IMF and the WTO, along with a host of other regional and global agreements, have helped to discipline the process. Robinson has always stressed that this is an incomplete and deeply contradictory process. In his new previously unpublished chapter on the ‘global police state’, he defines the central contradiction for nation-states as ‘between the need to promote transnational capital accumulation and their need to achieve political legitimacy’ (188). It is this which has led to the increasingly authoritarian politics of ‘militarised accumulation’ and repression.

Robinson has much to say of interest on this process. A chapter on migration issues, whilst understandably focused on the USA, combines a passionate denunciation of the ‘racialisation and criminalisation’ of immigrants with an analysis of broader relevance. State controls over migration serve not to prevent migrant labour, but to ‘lock that labor into a situation of permanent insecurity and vulnerability’ (130). He goes on to claim, with only a few degrees of overstatement, that the creation of two distinct categories of labor (‘immigrant’ and ‘citizen’) ‘constitutes a new rigid caste system that has become central to the global economy’ (130).

The most polemical chapter is titled ‘Beyond the Theory of Imperialism’. Here Robinson critiques theorists of a ‘New imperialism’ such as David Harvey and Ellen Wood, for remaining trapped within the framework of ‘rival national capitals’ developed by Lenin and Bukharin. He argues that the end of the ‘extensive enlargement of capitalism’ (by which he means the integration of countries such as China and the former USSR into the global economy) is also the end of the imperialist era of world capitalism (120). Yet, he also suggests that ‘We are witnessing not so much “US” imperialism per se but rather a global capitalist imperialism’ (115). Robinson notes that in the Iraq war the beneficiaries were not simply US corporations but European and Chinese corporations that won oil contracts, and that even US based companies which benefited from military contracts such as the Carlyle group and Halliburton, are themselves transnational conglomerates with diverse shareholders (118).

Robinson is right that those Marxists who, following Bukharin and Lenin, claim that capital remains organised primarily along national lines, are trapped in an outdated paradigm. However, when he invokes a theory of internal relations to critique the ‘dualism’ and ‘territorial reification’ (104) of Harvey’s approach, he goes a step too far in dismissing the territorial logic of nation-states which Harvey counterposes to the globalising logic of capital. Nation-states have certainly been transformed as a result of capitalist globalisation, but their territorial basis is not so easily transcended, and the absence of a ‘hegemonic’ fully transnational state capable of managing the new world order remains a source of serious tensions and chronic instability.

Two further points of criticism can be made. The first concerns Robinson’s ‘stagnationist’ perspective on the global economy. In earlier work Robinson has deployed an underconsumptionist explanation of economic crisis which has only a shadowy presence in this book. Yet, Robinson pays little attention to the way in which integration into global capitalism has facilitated the astonishing rates of economic growth in China and elsewhere across East Asia (apart from Japan which has certainly stagnated since the 1990s, as its own TNCs have invested abroad). Real wages have been rising rapidly in urban areas, and Chinese demand for imports is being accompanied by massive outflows of Chinese capital stimulating growth elsewhere. In his otherwise excellent chapter on the so-called BRICS, Robinson notes the rise in China’s Foreign Direct Investment between 2004 and 2013 from $45bn to $613bn and the integration of Chinese suppliers into TNC networks, but does not discuss the expansion of the domestic market.

The second concerns his appraisal of ‘Trumpism’. Robinson is correct that, despite the rhetoric, Trump’s policies of tax-cuts and deregulation amount to ‘neoliberalism on steroids’ (215). Yet he also notes that moves towards imposing tariffs were opposed by ‘much of the TCC’ and the political elite within the USA. The latest escalation of the US trade war with China could be explained by Robinson as pressure on China to open up its economy further to TNCs. But what is also clear is that those pushing for that escalation do not share the ‘globalist’ agenda of the TCC. That certainly applies to those ‘disparate neo-fascist forces’ (200) whose rise Robinson acknowledges but whose nationalism he tends to downplay. To describe “Trumpism” and similar movements as ‘incarnations of an emerging dictatorship of the transnational capitalist class’ (201) is a serious misjudgment.

Such lacunae aside, Into the Tempest provides an excellent introduction to the work of one of the most innovative Marxists in the arena of international political economy.