Marx & Philosophy Review of BooksReviews‘Archive That, Comrade! Left Legacies and the Counter Culture of Remembrance’ by Phil Cohen reviewed by Sanja Petkovska 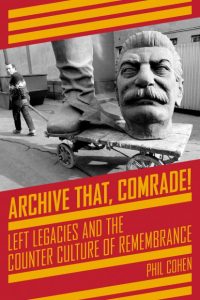 Phil Cohen
Archive That, Comrade! Left Legacies and the Counter Culture of Remembrance

Even if more like a collage of essays than a book ordered and structured in a convenient and expected way, it is quite obvious that Archive That, Comrade! is guided by a notion of the archive, holding together texts which, like a rhizome, develop in many directions. Narrative line from the beginning to end is not simply linear, connecting and ordering points in a manner, from time to time, not entirely clear. In sum the main impression is akin to many contemporary works belonging to the field of cultural studies: you have the feeling you somewhat grasp what the author is up to, but not confidently. A negligible point so long as you enjoy the ride, and this one, you certainly can.

The author of Archive That, Comrade! is Phil Cohen, professor emeritus at the University of East London and a senior research fellow of the Institute of Advanced Studies, University College London. On his website one discovers that Cohen identifies himself as (former) counter-culture activist and urban ethnographer. Despite the slight confusion to be had from time to time when moving through the project, it is clear that it belongs to the field of archival studies: with an account of theory and practice, it is actually a series of theoretical and methodological attempts flavoured with many fragments containing the author’s personal memories and experiences, alongside smaller ethnographic insights. What is certain is that one of the central motives of the book is the author’s involvement in the London underground scene of the 1960s, especially the London street commune movement and the occupation of 144 Piccadilly, whose relevance for the contemporary moment and generation is clearly intended. A furthermore set of reflections is also given on the issues of counter-culture everyday experiences and the political practice of remembering with the clear aim of imposing the question of alternative ways of archiving and recalling the past, and especially the past of leftist and counter-culture movements and achievements. Is there possibility for a special form of preserving leftist legacy? Could the left produce its own ‘model of commemoration’? This is the main question Cohen asks, providing evidence that very serious attempts do in fact exist.

Despite the author’s early ties with the Centre for Contemporary Cultural Studies (CCCS), his relations to further developments of this field and with prominent figures such as Stuart Hall remain a bit unspecified. It also remains unclear if there is any connection or reference between his work and the British New Left, or especially with British historical Marxism and the work of the major figures considered to belong to this school. Most of the given theoretical references are rather to the authors belonging to the later tradition of post-structuralist and more culturologist provenance (e.g. Foucault, Derrida, Latour) than to the tradition British Marxism. Although the entire field of cultural studies originated from the developments of Western Marxism, itself putting an accent to Marxist philosophy of praxis, often authors institutionally or disciplinarily belonging to this field are accused for practicing “bad Marxism” since this wave does not reflect upon the best way we are supposed to call Marxism an entire body of knowledge. This theme is one of the most obvious, weakest points of the book. It is not theoretically clear nor methodologically founded, and even the author is candid that what he is doing mostly belongs to do-it-yourself or self-didactic archivism related to the responses of youth cultures to developments in contemporary capitalism and memory politics. Nor however should this kind of work abandon this kind of ambition. Nevertheless, even if the project indicates some inputs for a leftist political agenda, nowhere do we find a clear direction. Likewise, no explicit explanation is given to why Cohen’s argument, as he claims, applies primarily to archival politics of Western capitalist societies .Any effort based on the tradition of cultural studies and its aspiration for more inclusiveness would have been expected and there with would have sought an active relation to the rest of the world and other archival practices, since internationalism is also one of the most valuable part of a leftist political project (xvi).

Perhaps the most valuable contribution of the book is some of the indications of which direction the counter-culture of memory and commemoration might go and some of the examples of institutional ethnography of archival institutions, practices of commemoration and leftist memory. However, there are many fragments in the book that are not fully developed and explicated, for example at the beginning eleven different definitions of archives are given. If however they are just randomly collected, how they were selected and what this collection of definitions is supposed to mean for the rest of the book remains unclear (1-3). Therefore, the book predominantly seems to be like ‘a container of profane narratives or holy scripts, bureaucratic protocols or autobiographical memories’ (4). The topic of British colonial archives, important for the book’s entire theme, is literally only mentioned in a passing tone. The somewhat crucial distinction between an oral and written tradition, anda more inert sorting of material compared to active engagement within the practice, also remains without much elaboration. What is engaging however is the motive of ‘archive fever’ which occasionally appears in the context of a constant ambivalence towards the past: are we trying to preserve and reproduce it, or to escape and overcome it? Not less important is the distinction between traditional and digital archive, and the danger of fake archiving material, which is also mentioned in the context of author’s own experience with some members of the reconstituted Socialist Unity Party of the GDR who had given the author a souvenir stone from the Berlin Wall.

The attempt to relate and connect personal and overall history, provided through narrative, is the book’s most valuable aspect, especially with its reflection and questioning on the extent counter and sub-cultural movements were in fact helping to accommodate youth to an almost post-capitalist consumerist dystopia despite simultaneously providing great anti-authoritarian inputs into the dialogue not only between generations, but also what Cohen forgets to notice – between East and West. A slightly schizophrenic split between progressives and reactionaries is quite an important issue for research into youth cultures and popular culture in general. How the archive of anarcho-punk movements from the 1990s in Serbia, for example, would be a great ethnographic project for the author to have pursued in order to enlarge his horizon beyond the Western trope. The analysis of some of his exhibition shows how the occupation of 144 Piccadilly was portrayed in the newspapers and is an especially interesting meander of the book. What is highlighted is that despite all the ‘memory wars’ surrounding the archival process, openness and democratic principles are crucial, a not so easy element to achieve and uphold. Inheritance is not an easy process; it defines what it is possible to preserve and know about human civilization and thus these issues are fundamental for either human or, if you like, post-human affairs. Other themes, such as the reliability of a narrator and revisionism, also emerge in the book although, within the given structure, appear more incidental.

The politics of memory and historical imagination, especially within our present, are indisputably crucial projects for the social sciences and humanities, on which all other human affairs rely upon. Surprising then is how the topic of the digitalization of archives in this book isn’t much integrated into a discussion of solution. This topic is crucial for the left with plenty of valuable examples in existence, such as for example Marxist Internet Archive. On the other hand, other topics take up quite a large and perhaps unnecessary proportion of the book. An excessive amount space is devoted to typology and classification of different sorts, whose place in the book is a slightly vague and not entirely engaging to read through. The clarity with which the 1960s counter-culture is documented by an author who actively participated in this movement is highly important and useful. For example, the thick description of two archives is quite valuable: the Black Cultural Archive (BCA) and Infoshop 56a. By composing a small ethnographic study of what those two institutions look like and how they operate, Cohen provides fascinating insight into how leftist counter-cultural practices of memory function in practice. Especially interesting is the somewhat comparative moment between them and how they handled his requests and the communication process. Those interested in these archives and who plan to work with them have here, in Cohen’s book, assistance for using their service in their own research.

The central idea of Archive That, Comrade!, the idea of a living archive of the left within the topic of the politics of memory preservation in general, is really an urgent and important one, regardless of how strongly it is made explicit within the content of the book. The revival of a leftist political project is as such nowadays a task for the archivists, a role, whether amateurish or professional, that all of us can take up. Archive That, Comrade! provides a good start for thinking about how we might handle this role.