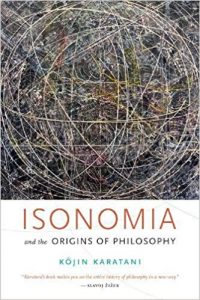 Kojin Karatani
Isonomia and the Origins of Philosophy

Fascinating not simply as one of the few non-European authors to meet relatively widespread reception on the contemporary continental philosophical scene, Kojin Karatani’s original insights into historical, political and philosophical problems range from Marx’s critique of political economy to Japanese literature, from the philosophy of history to Freud. Isonomia and the Origins of Philosophy is the seventh book by Karatani translated into English and, alongside Nation and Aesthetics: On Kant and Freud, one of two released in 2017. Just as Karatani exists simultaneously inside and outside contemporary European continental philosophy, given the long standing presence of Athens in the Western political and philosophical imagination, Karatani’s reorientation of ‘Greek Philosophy’ towards Ionia here (located in what is today Turkey) complicates ‘Greek philosophy’s’ status as ‘Western’. This is all the while that Karatani, by upholding its centrality, reaffirms a ‘Greece’ that is, historically and often rhetorically, a Neo-Aristotelian Renaissance, Enlightenment, German Romantic and Western Chauvinist fantasy.

Isonomia though, in the first instance, presents Greek thought as a contest between Athens and Ionia. Where Athens remains caught in the struggle over arche, rule, or sovereignty, Ionia – and Isonomia or Isonomy – finds a way to escape that logic. Isonomy comes from the Greek Isos (equal) and nomos (law or custom). Herodotus and Thucydides used to term to describe a kind of government, but the two most important modern interpretations come from Frederick Hayek and Hannah Arendt. For Hayek, the concept begins in Cicero and is rediscovered in eleventh century Bologna, migrating into sixteenth century England where it comes to mean equality of persons under the law. It is however Arendt’s reading that is most relevant for Karatani. There, isonomy’s specificity is its lack of arche (as in, anarchy, democracy, aristocracy, etc.), denoting a lack of governmental situation of ‘no rule.’ For Arendt, it is precisely the lack of an arche that defines the Greek polis – the lack of distinction between rulers and ruled. Karatani’s position is Arendt’s position, but substitutes Ionian isonomy for the Athenian polis. Karatani uses Ionian thought in general as an example for thinking through what is perhaps the liberal political problem par excellence; namely, the conflict between freedom and democracy, between the freedom of individuality and democratic homogeneity. On the one hand, individual freedom endangers equality between individuals. On the other, equality among individuals endangers individual individuality.

Karatani describes the problem of liberal democracy thusly: ‘modern democracy is a composite of liberalism plus democracy […] it attempts to combine […] two conflicting things, freedom and equality. If one aims for freedom, inequalities arise. If one aims for equality, freedom is compromised’ (40). As it was for Schmitt, the ‘inescapable’ contradiction between liberalism and democracy (between identity [democratic homogeneity] and difference [irreducible individuality], the One and the Many, Unity and Multiplicity, etc.), is not simply operative at the level of political discourse, but is of course theological and philosophical as well. For good reason then, Ionian ‘natural philosophy’ operates, for Karatani, simultaneously on theological, political and natural-scientific registers. Here, Ionian thought should be understood as fundamentally, ‘an understanding of ethics and human existence from the standpoint of physis,’ where, in Spinozist fashion, ‘the world and human beings were themselves equally physis or nature’ (38). His attempt to locate a separate ethical-philosophical tradition in Ionia that is not reducible to the goings on of the polis – where, ‘true ethics cannot come from within the polis, but rather only from the cosmopolis’ (78) – should be read as a worthwhile contribution to the various theorisations of cosmopolitanism. Yet despite Karatani’s own description of the inability to transcend the liberal-democratic, Ionia is the intellectual historical standpoint from which to resolve it; or rather, the standpoint from which one must stand to aim at resolving it. ‘If Athenian democracy is the forerunner of today’s bourgeois democracy (parliamentary democracy),’ he writes, ‘Ionian isonomy provides the key to a system that can supersede it’ (38). ‘The key to a system’ – nothing less is at stake in Isonomia.

That is the political bent. More broadly though, Isonomia consists of remarkable re-readings of canonical figures in Greek philosophy. For the expert in Greek philosophy and the more casual reader alike, Greek thought will appear anew. Readers familiar with Karatani will encounter the incisive and syncretic form of theorising also found in Architecture as Metaphor and Transcritique. Indeed, Karatani is that rare thinker for whom the content of ideas is more challenging than their mode of presentation. Yet, however novel and fascinating his account of the development of Greek thinking from Thales to Plato is, Karatani’s theoretical horizon in Isonomia is not limited to the disciplinary confines of either intellectual history or Greek philosophy. The entire work is subtended by Karatani’s attempt to salvage an Ionian politics for the present world-historical moment.

This salvaging operation follows from the theoretical framework established in Karatani’s 2014 The Structure of World History: From Modes of Production to Modes of Exchange. Indeed, the full theoretical force of Isonomia will be more immediately accessible to those familiar with the larger historical work that grounds it. For good reason, Isonomia does include a helpful appendix summarising the relevant points. Karatani’s shift from ‘modes of production’ to ‘modes of exchange’ – where exchange, as it was for Moses Hess, is not reducible to ‘economic’ exchange but encompasses a more general category of social intercourse that functions both as a straightforward critique of Marxist economic determinism and of the ‘relative autonomy of the ideological superstructure’ which, in an attempt to overcome a historically determinate economism meant, ‘supplementing the theory of economic determinism [the critique of political economy] with knowledge derived from such fields as psychoanalysis, sociology and political science’ (Karatani 2014: 10). Those familiar with the ‘thought of 1968’ will easily recognize who Karatani has in mind. For Karatani, this ‘late Marxist’ turn resulted in, ‘a tendency to underestimate the importance of the economic base’ and, ‘the loss of any totalizing, systematic perspective for comprehending the structures in which politics, religion, philosophy, and other dimensions are interrelated’ (Karatani 2014: 11). It is the loss of this perspective that, in Karatani’s estimation, has led to political paralysis and the abandonment of any attempt to find a way to supersede existing conditions. The rediscovery of Ionia is an integral step in recovering such a perspective.

Karatani exists in a long line of post-Althusserian thinkers who attempt to found a definition of modern or contemporary politics by harkening back to the pre-modern. Indeed, apart from the fascinating intellectual historical work Karatani accomplishes in Isonomia, at issue here is fundamentally the mediating relation of politics and historical theory – a question that hovers over the entirety of Isonomia. For Karatani, the fundamental flaw of the relative autonomy position is that its eschewal of any attempt to compose systematic theoretical accounts grounded in economic analysis has led to political paralysis. It is therefore a systematic theoretical account – an account of the entire ‘structure of world history’ – that is the condition of possibility of effective political action. Karatani should take credit for taking as his starting point what we all know but don’t like admitting is true: that there is crisis in the capacity of established theoretical frameworks to produce, simultaneously, thinking that is both adequate epistemologically and inspirational for effective political praxis. With the supposed decline of ‘grand narratives,’ the idea of actually mediating political conjunctures with a ‘Theory of World History’ so as to arrive at effective political action has become something to be, at best, chuckled at and at worst, castigated for merely recapitulating the sorts of universal and totalising narratives that are supposedly oppressive in and of themselves. Political praxis often seems stuck between fact and value; between the reliance on the deduction of certain laws of history (an ‘objective’ and ‘apolitical’ scholarship and its inverse, historicism) and appeals to principles regardless of analyses which equate political praxis with ethical conduct. Yet one wonders, in light of the simple fact of geopolitical integration – of the unprecedented compression of space and time that is constitutive of modernity – what sort of actuality Ionian politics can even hold.

Key to Karatani’s reading of Ionian philosophy is that it should be understood from the perspective of physis, stressing as it does the self-motion of matter and the inseparability of matter and motion. At the social level, for Karatani, this means that ‘the individual existence of human beings is inseparable from their mobility […] without the possibility of movement, there is no individual’ (131). ‘Individual choice is only possible,’ he further writes, ‘where individuals are not subject to tribal affiliation and free to move to another place if they so wish’ (132). In fact it is precisely because of Ionia’s status as a colonial city that enables this freedom of movement. Obviously there are troubling political implications here, which are well commented upon elsewhere (Kaur 2018). To be emphasised here however is not the troubling colonial politics, but rather what Paul Valéry has described as ‘the sizes, areas, and masses involved, their relations, the impossibility of localizing anything, the prompt repercussions, all will more and more impose a policy very different from the existing one’ (Valery 1962: 116). Specifically, what is Ionian freedom of movement in light of this change of scale, of this impossibility of localizing anything? More broadly, what is there left of concepts of politics that, however grounded they are in a systematic theory of world history, don’t take into account the specificity of modern politics as opposed to its Greek counterpart?

However one answers that question, Karatani’s Isonomia and the Origins of Philosophy is a deceptively complex work that offers numerous transdisciplinary insights for the philosophically initiated and uninitiated alike. And while its true value may be its intellectual historical angle – namely, its fascinating re-presentation of the history of Greek philosophy – Isonomia is a very worthwhile part of Karatani’s broader effort to offer readers an illuminating systematic perspective from which to view our contemporary political and philosophical situation.