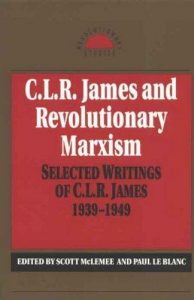 Vincenzo Maria Di Mino, Graduate in Political Theory, is an independent researcher on political and …

Post-colonial discourse has its roots within specific contexts of struggle, emerging largely from the early twentieth century out of the connections between the struggles over the rights and self-determination of colonial subjects. The connections with Marxist thought have been clear from the start, as Lenin was aware: there is no national self-determination without liberation from imperialist dominance, no democratic constitution without struggles and class conflicts.

The intellectual and militant figure of C.L.R. James perfectly embodies this crucial marriage of the communist and anti-imperialist movements within the fire of the ‘short century’, crossing the wars, the different forms of fascism and the crisis of the Soviet revolutionary process. He was a militant anti-racist, a scholar of the history of blackness, a political leader in opposition to Stalinist tendencies, an ante-litteram critic of the ‘white masks’ created by western civilization through Enlightenment and bourgeois revolution, a proletarian organizer and a tireless traveller between the two sides of the Atlantic. He can be considered a material precursor to the variegated post-colonial hypotheses, especially those more sensitive to the subjective transformations of subjectivity within anti-imperial and anti-capitalist struggles.

In fact, the narrative and political geography of James’s work goes from France to Haiti, from England to the United States and Africa, tracing the routes of slavery and primitive accumulation, at the same time drawing cartographies of liberation which, starting from cultural practices, delineate the processes of self-determination of colonized subjectivity. The dialectic between Moby Dick and Ahab, made at Ellis Island during the anti-communist detention of 1952, is the expression of a secular struggle between colonized and colonizer, among Other and Western consciousness, whose outcomes continue to be defined by the conflict of social movements against racism and nationalism.

Starting from these coordinates, it is possible to rediscover and re-read in a new light some precious essays of the Caribbean intellectual, written between 1939 and 1949, through the characterization of the subtitle chosen by the editors: it is within ‘Revolutionary Marxism’ that it is possible to detect the most valuable theoretical guidelines of his political work. The introductory writings of Le Blanc, Van Gelderlen, Glaberman, Bracey and Buhle also help to reconstruct not only a theoretical but also a human and biographical profile of James himself, consequently showing its absolute coherence, and, in contemporary language, its fidelity to the Event.

What, according to the authors, acts as a continuum in the path of this Caribbean intellectual is the absolute faith in the human possibilities of redemption and collective liberation from the chains of oppression. The writings chosen by the curators belong to James’s Trotskyist engagement, a choice corresponding to the ideological hue that characterizes them. Why Trotskyist? Apart from the fascination with the opponent to Stalinism, behind the ideological examples of the moniker, there is a precise choice, almost Machiavellian, of the ritorno ai principi of Leninism, hence to the Esprit of the revolution of 1917. The dense essay on Trotsky, present in the book, is the document of an ideological battle, carried out on a global scale, against the positions assumed by the Communist International against the fascist phenomenon, an explicitly petty bourgeois phenomenon and completely internal to the compatibility of the capitalist regime. Moreover, it is an essay against the absolute centralism wrought by Stalin, which pulverized the opposition, and the general choices which weakened the material power of the working class in the face of the Frontist choices, putting aside the revolutionary intransigence and choosing instead a more moderate profile, in agreement with the social-democrat forces and the progressive and liberal bourgeoisie.

What in the composite world of Trotskyist opposition should be emphasized, in James’s opinion, is the unilateralism of worker and proletarian decision, the methodical diffusion of self-government within the social fabric, the propensity to the constant duration of revolutionary processes, permanent in the sense of a constant opening of the dialectic between collective governance bodies and spaces of social decision, between, in a nutshell, State and Soviet, including the global dimension of the revolutionary upheavals themselves, not as ideological ambitions but as operative connections of internationalist solidarity of communist organizations and, above all, as fundamental glue of anti-racist struggle. His classic work World Revolution, 1917-1937: The rise and fall of Communist International will make systematic these assumptions, making it de facto one of the most prominent and influential exponents of the Fourth International, a perspective that he will then abandon after the war, having seen the limits and the sterility of a purely ideological opposition.

The themes that emerge from the writings essentially belong to topics of apical importance in the economy of the thought of the revolutionary: the first, surely, that of Blackness as revolutionary inheritance of the struggles of blacks; consequently, on the basis of the global look at conflicts, it relates to the weight of anti-colonial struggles as an internationalist practice of combating the imperialist powers, and the effect they had in the inter-imperialist dynamics themselves. The other theme is the history of the working class in the United States, and the organizational forms that it was given and to which it gave itself.

The first thematic axis, anticipating the historiographical themes of The Black Jacobins, exposes the antagonistic nature of black culture in European and American history, a rich and unknown history because of its orality, made of rebellion in plantations, of uprisings in ships and from fugitive slaves, useful to demolish the mythology of the ‘Docile Negro’ (77) and useful to enrich the revolutionary stories of unknown pages, because muted under the line of the prevailing color. The praise of the revolutionary temperament of the Black people, rebels in history together with Parisian Enragés, as an example of conflicting genealogy, becomes the means to criticize those who, like Richard Wright, bend their important task of writing fiction for the purposes of Stalinist propaganda, concealing the motives of the Party behind the struggles of ‘Negroes’. The independence of this movement from the logic of the State, for James, could only consist in the alliance with the broader segments of the metropolitan proletariat, to avert the spreading of the racism and the petty-bourgeois fear fuelled by capitalist elites. In this context, the analysis of slavery and imperialism is conducted from a strictly materialistic point of view, showing how both phenomena degrade the workforce, extracting as much value as possible and accumulating it as dead labour, mortifying the collective power of productive forces and degrading the entire social development, according to Marx’s writings about the role that the American working class would take in the fight against slavery: problem that, as James himself asserts, can only be solved through class struggle and socialism (140).

The second thematic axis interrogates the political history of the United States from the perspective of the class struggles that have characterised the country. Essential here is the methodology of analysis of the political reality that he transposes from the work of Du Bois, especially from Black Reconstruction; in fact, placed at the centre of the narration of the events is the working subjectivity and the emergence of the class in fieri, locating the struggles as a factor of social and economic development. Thus, the analysis of the New Deal becomes the test bench of the of James’s dialectical Marxism: it is analysed as a higher moment of capitalist development following the crisis of 1929, both from the point of view of the real subsumption of the whole of society to the needs of the realization of the state for capital – a concept he borrows from an analyses on state bureaucratic socialism as a social validity of the law of value and forced organization of productive force – both from the point of view of overall development of the social workforce and its political organization. Unsurprising then is James’s admiration for F.D. Roosevelt as a fundamental expression of the capitalist sensitivity towards government in accordance with social conflicts and needs. What from a Leninist point of view highlights the New Deal is the co-presence of a dual power within the relationships of production, a subjective class power that determines the material constitution of society through struggles. This dualism, organizational and concrete translation of the ‘permanent revolution’, has a genealogy that James traces through the Abolitionist struggles of Frederick Douglass, in the Underground Railroads and in the battalions of the blacks during the Civil War and in the conflicts of the IWW at the turn of the century during the formation of the American Communist Party before and after the crisis and war of Big Government: different processes of class subjectivation that, subsequently, needed a specific revolutionary organization (164).

What makes James’s analysis important is its ‘subjectivism’, the centrality that the analysis of the working subjectivity assumes in the conflictual dialectic against the articulations of capital, so as to show racist phenomena not simply as cultural invariants, but as internal necessities to the accumulation of dead labour and the centralization of capitalist command. On the other hand, the communist subjectivity emerges from the rails of this theoretical dialectic, giving flesh and bone of the real processes, innovating the inheritance of the previous battles and activating them within new contradictions: with Gramscian echoes, the battle for political hegemony gives new life to the subaltern voices of the past.

In conclusion, the revolutionary internationalism of James still lends itself to a non-ideological or nostalgic usage today. The claims of rights, the struggles for emancipation and the liberation of oppressed subjectivity cannot be separated from connection of the different segments of struggles – what criticism today might call intersectionality – and from the overall look of the same battles. To shake the spectrum of dualism means, through and beyond the work of the Caribbean, to evoke the threatening spectra of genealogies and, as the trajectory of the essays contained in the volume show, to put into the field without fear, a hypothesis of social transformation that, returning to the common root of subjectivity, can allow its material liberation. Without collective force, without the concreteness of the social being, no revolutionary process can escape the nightmare of despotism and the chains of authoritarianism.