Marx & Philosophy Review of BooksReviews‘New Dark Age: Technology and the End of the Future’ by James Bridle reviewed by Jack Kellam 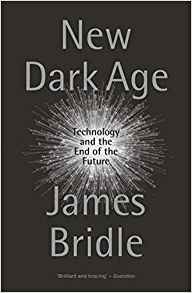 James Bridle
New Dark Age: Technology and the End of the Future

James Bridle’s New Dark Age offers a stark analysis of how humanity’s increasing entanglement with a network of multiple complex technological processes affects our ability to think, to understand, and to act. Not a formal academic text, the book’s ten chapters traverse a number of disciplines – from history to politics, computer science, and geography – to unfold the interlacing pathological manifestations of Bridle’s central dialectic: the more information we produce about the world, the less we are able to understand it. While its detailing of technological pathologies, in areas like high-frequency trading, artificial intelligence and climate change might well be familiar to those already working on such topics, alongside his engaging, readily-comprehensible prose, the great value of Bridle’s work is to bring these together through a productive epistemic schema that begins the task it sets all of us: the development of new ways of thinking, describing, and acting with the technology that shapes our world.

While its argument is not unifocal, as the title suggests, New Dark Age is at root occupied with knowledge. Not knowledge as mere ‘epistemology’, but knowledge as a socially situated phenomenon, produced within certain material conditions, and always bound up with power relations and social forces. It is ‘a book about what we know, how we know, and what we cannot know’ (2). Bridle’s thesis holds that our contemporary social pathologies – from climate change, to conspiracy theories, financial crises, mass surveillance, and even disturbing, hoax Peppa Pig videos on YouTube – constitute a coming ‘New Dark Age’, in which our technological capability to produce and process vast quantities of information is not matched by an increase in knowledge and understanding of the world. Rather, the more we ratchet up computational power and accumulate data, the more we are profoundly left ‘in the dark’, stumbling blindly through a world that escapes us.

In the first chapter, ‘Chasm’, Bridle writes that ‘we find ourselves today connected to vast repositories of knowledge, and yet we have not learned to think. In fact, the opposite is true: that which was intended to enlighten the world in practice darkens it’ (10). For many, this is a clear echo (though unexplored by Bridle) of Adorno and Horkheimer’s contention that ‘the wholly enlightened earth is radiant with calamity’ (2002, 1). If the early Frankfurt School were advancing a critique of mass society’s instrumental rationality, then Bridle’s argument in New Dark Age is nothing short of a similar project for the ‘networked’ age: the development of new modes of thought distinct from the predominant functionalism of ‘computational thinking’ (4) that reifies the world in its own image, such that the vision of the world produced by computation gets taken as exhaustive of the world as it really is. Under its grasp, the solution to problems – social, economic, and environmental alike – has become always more: more processing power, more data.

This inexorable pursuit of more generates vicious feedback loops, whereby the pursuit of solutions only ends up accelerating the morbid symptoms it intends to resolve. For Bridle, this is the ‘New Dark Age’, in which ‘the value we have placed upon knowledge is destroyed by the abundance of that profitable commodity, and in which we look about ourselves in search of new ways to understand the world’ (11). The latter portion of this sentence is crucial for Bridle: his darkness is not ‘literal’, nor ‘an absence or occlusion of knowledge’, ‘expression of nihilism or hopelessness’ (11). Rather, darkness is both ‘the nature and the opportunity of the present crisis: an apparent inability to see clearly in front of us, and to act meaningfully, with agency and justice, in the world – and, through acknowledging this darkness, to seek new ways of seeing by another light’ (11).

What follows in New Dark Age is an exposition of our current darkness to attempt to find alternative ways of seeing and understanding the world. The substantive ambition of Bridle’s argument can at times be concealed by his calls for epistemic modesty – although, this might fairly be considered exactly the paradox he locates in our contemporary age. Against the hubris of computational thinking, we require forms of ‘systemic literacy’ over total knowledge, modes of language and metaphor that allow us ‘to think without claiming, or even seeking, to fully understand’ (6), meta-linguistic ways to think through the system without becoming completely absorbed by its own terms, to deal ‘with a world that is not computable, while acknowledging that it is irrevocably shaped and informed by computation’ (4). Yet the embeddedness of us and our technologies within ‘the network’ at once reinforces and offsets this epistemic modesty. Bridle holds that the network teaches us that ‘nothing short of everything will really do’ (10), yet it is precisely this abundance that ‘reveals the inadequacy of computational thinking’ (9), which is unable to grasp ‘the interconnectedness of all things’ (9).

This sets the tone for Bridle’s nine subsequent ‘C’ titled chapters (Computation, Climate, Calculation, Complexity, Cognition, Complicity, Conspiracy, Concurrency, Cloud) which trace the inter-dependency of the advent of modern computing, meteorological prediction, climate change, state surveillance, internet conspiracism and much more, while beginning an attempt to develop new ways of thinking through the new dark age. Bridle unravels, for instance, the bad dialectic resulting from the initial development of computation as a tool of weather prediction (20-32), to the complicity of subsequent carbon-intensive pursuit of data accumulation in climate change (62-4), to the paradoxical result of emergent, unpredictable meteorological phenomena like ‘clear air turbulence’ (65-9) affecting commercial flights as a result of high atmospheric carbon dioxide levels. The book is replete with these dark, hubristic fables, in which the human pursuit of computation has generated emergent consequences that escape its control – the multiple dynamics involved in ‘climate catastrophe’ the most brutally archetypal.

These detailed examples substantiating much of Bridle’s argument – from encounters with chemtrail conspiracy theorists (192-4) to racist automated Amazon products (126) – are engaging, powerful and disturbing alike, and Bridle is superbly adept at locating manifestations of the new dark age in acute particular instances: whether these be data leaks from infidelity-focused dating websites (237-8), the mini financial crises generated by automated journalism (123-4), or merely the absurd spectacle of Japanese tourists following their sat-nav into the sea (42). His insistent message throughout is clear, however: the pursuit of more data, more computation, and more technology is only producing ever more morbid consequences, fueling the fires that ‘tech’ sets out to fight.

The argument, in keeping with Bridle’s epistemic inclinations, progresses through these chapters less as progressive accumulation, and more as a spiral through his selected networked phenomena.  This means there are points at which the reader hopes he might pause for more sustained reflection – particularly when he gestures at those metaphors, symbols, and analogies that he believes might contribute towards the greater ‘systemic literacy’ required to navigate the new dark age.

For instance, his critiques of left ‘accelerationism’ (132-4) as reliant upon an elitism that ignores how the complexity of contemporary technologies can itself drive (epistemic) inequality, or the logic of ‘technological deployment might be tainted at the source’ (132), are not in themselves particularly novel. However, his juxtaposition of the accelerationist hero of Prometheus, symbolic of the hubris of computational logic, with an alternate figure of Hermes – ‘revealer of language and speech’ (134) – as ‘the guide for the new dark age’ (134) is potent. Rather than a Promethean ‘pushing back of the darkness for little thought for what’s beyond’ (133), Bridle contends that a hermeneutic ‘thinking in the moment’ rather than absently beyond it, and a sensitivity to ‘the ambiguity and uncertainty of all things’ (134) is the necessary orientation for a new dark age.

Such subtle engagement with the accelerationist and techno-optimist strands prominent on sections of the Left is urgently required if we are to develop a collective, constructively critical relationship with technology that remains cognisant of its profound dangers, but refuses to cede to a deterministic pessimism. Ultimately, this will require more than the brief, yet illuminating, moments Bridle offers in New Dark Age: from the aforementioned Hermes, to the ethics of ‘cooperation’ and ‘stewardship’ (160) inspired by Gary Kasparov’s cyborg ‘Advanced Chess’, or a ‘guardianship’ that does ‘the least harm in the present and… [bears] responsibility to future generations – but does not presume that we can know or control them’ (251).

As much as New Dark Age therefore leaves the reader desiring more, the provisionality of Bridle’s prescriptions is in keeping with the epistemic orientation he proposes we adopt for the new dark age: ‘cloudy’ (9) and uncertain, but also networked and collective. This can only be accomplished together. While some readers might mistake this for political quietism, it seems clear the Bridle sees his work as a political intervention all the way down. Learning ‘to think, and think again, and keep thinking’ (252), as Bridle proposes, is seen as inseparable from and foundational to the constitution of political agency in the new dark age. It is exactly the urgency of political action that demands we rethink.

Within a growing literature on political thought and action in the context of networked technologies, Bridle’s New Dark Age is a stimulating and accessible contribution, generative of potent questions to guide contemporary radical political theory.