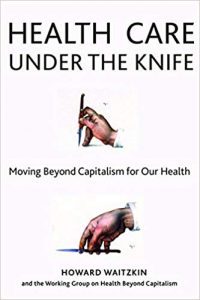 Mirjam Pot is a Political Science graduate studying for a PhD at the University of Vienna. She …

Most scholars at the intersection of medicine, health care and the social sciences agree that health and disease are, in a relevant dimension, also social and political phenomena. Health Care under the Knife, edited by Howard Waitzkin and the Working Group on Health Beyond Capitalism, however, goes further by relating persisting and more recent problems in health care with the developments and workings of capitalism. Providing detailed descriptions in the single chapters, the book not only claims that health care systems in profit-oriented societies are unable to sufficiently alleviate the most pressing health issues: The authors also show how health care systems in capitalism contribute to some of the conditions they are supposedly meant to counteract, as health care itself is an important domain of capital accumulation.

The book is organised in five parts. Part one discusses the changes in the social class position of doctors and how the advancing corporate organisation of medical labour as well as the ever-increasing importance of (digital) technologies in health care is affecting the everyday work practices of medical professionals. The use of medical health records, quality assessment via metrics, and the widespread replacement of relationship-based care with high-tech interventions are just a few of the changes that contribute to doctors’ growing subordination to management and their alienation from their own work and patients.

Part two draws on the concept of the ‘medical-industrial complex’ to address the interwovenness of industry, academia and the state in producing profits in health care, which is argued to blur the differences among for-profit, non-profit and state actors. The prime example is the funding of drug trials by pharmaceutical companies and the companies’ exertion of influence on governmental regulations and procedures of approval.

Following a critique of the Affordable Care Act (‘Obamacare’), at the beginning of part three, the book for the first time also draws on examples from South America and Europe to address how under the neoliberal paradigm, austerity and privatisation have shaped health care reforms in Colombia, Greece, Spain and the United Kingdom. By pointing to the retreat from universalism and increasing cost sharing in these countries, the book reminds us that the movement towards universal health care is far from being a linear progression.

Part four then moves to the global scale (keyword ‘imperialism’) by first discussing the role of international organisations like the WTO and the WHO in global health care, followed by a historical comparison between the Rockefeller and the Gates foundation and the impact of their philanthropic engagement in particular in the Global South. Although the amount of money allocated to health initiatives by these foundations has been appreciable, their focus on specific diseases and the underlying idea of a technological fix has prevented substantive and sustainable improvements of public health infrastructures in these countries.

Finally, in the fifth and most extensive part, the book outlines a number of examples of how and where future struggles for better health and health care could or should take place. Popular protest movements in Bolivia and Mexico are consulted to inspire resistance against the privatisation of health care and other health-related infrastructures. Furthermore, the authors draw on these movements to motivate political action in favour of universal health care systems that could overcome the structural inequities produced by the commodification of care. Especially the case of the Affordable Care Act, its benefits but also its shortcomings, and the struggle for a single-payer national health programme in the U.S. are discussed at length. Challenging other writings’ often overly positive evaluation of the Act, makes the chapters on this example a particularly interesting read. However, the authors also remind us that the influence of the health care system on our health is rather modest in comparison to the impact of environmental and social factors like access to clean water and unpolluted air or the provision of healthy foods. Not to mention, for example, racial and gender relations, housing quality and working conditions. In short, capitalism does not only affect our health via the commodification of care but more importantly through its logic permeating all aspects of our individual and collective lives.

Health Care under the Knife profits in particular from the diverse backgrounds and experiences of its authors. Many of them, like Howard Waitzkin himself, are established researchers in the social or medical sciences, health care professionals and social activists. Above all, however, the strength of the book is the detailed studies on the economic dimension of health care, be it how the insurance and pharmaceutical industry’s interests are catered for in the design and reform of national health care systems and global public health, or the changing class position (‘proletarianisation’) of doctors. Depicting these processes in their development over time and relating current trends (as for example the philanthropic engagement in public health) to their historical predecessors, is another merit of the book.

Obviously, these two aspects are essential for understanding health care in contemporary profit-oriented societies. Yet I want to argue that they are not sufficient for a thorough analysis of health care in capitalism. The limitations of the book in explaining health care in capitalism are related to the rather narrow notion of capitalism the book draws on, understanding it merely as an economic but entirely deterministic system (or even equating capitalism with the activities of large companies). Social philosopher Rahel Jaeggi, whose work is situated in the tradition of the Frankfurt School, has suggested to think of capitalism as a ‘way of life’. In such an understanding, the free-market economy is just one component of capitalism. I consider this a valuable approach, because reducing capitalism to an economic system, in which a couple of companies and organisations run the world, does not help to understand why we still live in capitalist societies. In other words, such a reductionist understanding of capitalism impedes (rather than contributes) to understand why resistance is not much more common and why we still play by capitalist rules. Instead, such a notion of capitalism conceptualises us as ideologically blinded and stripped of any agency as well as denies our own role in the maintenance of capitalism. In this sense, conceptualising capitalism as a way of life, and health care as part of it, makes it also necessary to consider how we are ourselves, as patients and maybe doctors, entangled in capitalist health care. It is particularly striking that patients are almost entirely missing from the analyses in Health Care under the Knife.

I want to illustrate the argument about our own entanglements with the example of over-diagnosis and over-treatment. Over-diagnosis is the diagnosis of anomalies that would never result in symptoms and over-treatment denotes the resulting medically unnecessary and often harmful treatment of patients. Both are particularly connected to the availability of new diagnostic and therapeutic possibilities, like high-resolution imaging technology or the diversification of available drugs. The introduction of new technologies in health care resulting in over-diagnosis and over-treatment can in part be understood as consequences of the creation of new health markets. (Although Health Care under the Knife does not refer to this example, it is specifically this economic dimension that is addressed throughout the book.)

However, the unnecessary and/or harmful use of diagnostic and therapeutic interventions cannot be fully understood without understanding doctors and patients’ role in it. Doctors, for example, who have little time, consider it more comfortable to prescribe a patient with lower back pain an MRI scan instead of listening to her talk about her currently stressful life. Or take doctors, who prescribe antibiotics, not primarily because it would be medically necessary, but to sooth a patient. Often enough patients themselves expect quick solutions for their ailments and demand medically unnecessary interventions themselves, sometimes also against the advice of their doctors. In this respect, to understand over-diagnosis and over-treatment one also has to understand how imaginations and expectations about salutary medical interventions are mobilised and reinforced, how patients’ desires and hopes are appealed to, or how patients are increasingly addressed as being responsible for their own health and ‘proper functioning’.

We have to understand doctors’ and patients’ role in capitalist health care to understand why there is a growing market for medical products, which cannot only be explained by the continued existence of diseases. Of course, part of such an analysis is among others to address structural aspects, as the reasons why doctors have less and less time for patients, and why patients demand quick solutions. Looking at the specificities of health care and the problems encountered by doctors and patients ‘on the ground’, in turn also contributes to a better understanding of health care in capitalism and maybe even to a better understanding of contemporary capitalism itself. Health Care under the Knife, however, misses this opportunity. The reader learns interesting details about health care reforms, the insurance industry and so on. Yet on an analytical level, a book about other fields like education or housing in capitalism would have resulted in similar conclusions. The book is based on and reaffirms an economic reductionism and determinism that both have already been challenged in various strands of Marxist theorising. In this sense, the analytical concepts it draws on are of limited value to fully understand the dynamics of capitalism but in particular to fully understand the specific dynamics of health care in capitalism.

This last point is also visible in the historical parallels the book draws, particularly in the chapters on contemporary forms of ‘imperialism’ in health care. The creation of markets in the Global South for medical products manufactured in the Global North is mentioned as an example of this phenomenon. What is not mentioned, however, is the lack of even basic drugs in many poorer countries because pharmaceutical companies do not consider the production of such drugs profitable. It would be a worthwhile endeavour, besides stressing continuity, to also consider where it is more fruitful to think in terms of discontinuity. For capitalism to be a stable arrangement, it constantly has to change. Consequentially, if we want to grasp the current relationship between capitalism and health (care), we also have to update and refine our analytical tools to do so. Not just for theoretical reasons, but to move beyond capitalism for our health.

Health Care under the Knife is an informative reading for an audience interested in detailed descriptions about how economic interests shape, particularly in the U.S. health care system. Readers with an interest in learning more about the specificities of health care in capitalism or readers interested in a productive engagement of empirical data on health care with Marxist theory, however, might find the book somewhat shallow.