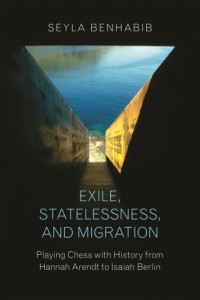 William Hebblewhite is an independent researcher. He received his PhD from Macquarie University in …

Issues of migration, statelessness and exile are at the forefront of our contemporary political milieu. Since 2011, the war in Syria has displaced over five million people. Hundreds of thousands of Rohingya, have had to flee violent persecution from Myanmar. Rising sea levels perpetuated by inaction on climate change has the potential to create an exodus from low lying islands in the Pacific – forcing climate refugees to seek safety in western democratic nations whose citizens are already weary of mass migration levels. As Benhabib writes in the Preface to the book: ‘In 2000, there were 175 million migrants out of 6 billion of the world’s population. In 2015 the number of international migrants – persons living in a country other than where they were born – increased by 41% to reach 244 million worldwide’ (XV). The numbers presented here are difficult to quantify. What does 244 million people look like? What ought we to do as a society to help lessen the burden of those fleeing economic disaster, war or climate disaster? Can the historical figures of critical theory provide the tools to help answer this question? It is in this context that I read Seyla Benhabib’s new work Exile, Statelessness and Migration.

Benhabib’s work does not focus on the problems that are currently facing humanity. Rather, she takes a different path. She traces the intellectual development of a group of Jewish refugees in the twentieth-century. The book, she writes, ‘explores the intertwinement of the lives, careers and thoughts of Theodor Adorno, Hannah Arendt, Walter Benjamin, Judith Shklar, Albert Hirschman and Isaiah Berlin among others’ (xv). Why these figures, and why now? The work is at its most general level a history of the Jewish intelligentsia that have shaped contemporary political theory, and critical theory.  It is a work littered with the events, and personal reflections that each of the figures that Benhabib looks at experienced. In a time where the shadow of history seems to be rearing its ugly face – the works influenced by the first tragedy help trace the contours of the current farce. Beyond this, the work is also an attempt to reckon with how issues of universality, belonging, inclusion are challenged by the modern world’s confrontation with the question of migration. It is therefore not only a history of remarkable figures – and the struggles they encountered in their Jewishness. It is also a deeply political and philosophical text which claims to abstract from the personal experiences described in the book to the issues pertaining to the world as a whole.

The book contains eight chapters. These have been either published or presented in one form or another in other places. Though all sections are said to have undergone significant revisions before inclusion in this volume. Chapter one provides us with a short introduction to the figures and themes of the book. We are told that Hannah Arendt will take centre stage in the book, and she does. Benhabib deftly situates Arendt’s political thinking in relation to contemporaries such as Strauss, Levinas and Berlin while also probing the limitations of Arendt’s political theory by juxtaposing it with the works of Shklar and Hirschmann, among others. Chapter two explores questions of equality and difference from the perspective of two responses to the dilemma of German-Jewry. The relation of the universality to the particular is explored in chapter three by way of a critical comparative analysis between Arendt, Benjamin and Adorno. Chapter four is an in-depth look at the reactions and responses to Arendt’s controversial take on the infamous Eichmann trial. Chapter five is temporally dislocated from the figures of Benhabib’s other work in this book. It explores the contemporary work of Judith Butler, and her turn towards an ‘ethics without normativity’. Chapter Six presents the most poignant work in the book. It is an examination of Arendt’s claim of the ‘right to have rights’ situated alongside critical reflections of Arendt’s position provided by Jacques Rancière and Didier Fassin. Chapter seven looks at the work of Judith Shklar and her critique of Arendt. Chapter eight is about the interpretative social science of Albert Hirschmann, and the last chapter provides an interesting piece on the relation of Isaiah Berlin’s work to his own Jewishness.  The book carries many different themes: Jewishness and Otherness; exile, voice and loyalty; legality and legitimacy; pluralism and judgment. These are explored through the work, though the focus on particular themes often overrides others. For instance, the focus on the Jewishness of the figures that Benhabib explores, and the feeling of otherness that they endured because of their Jewishness is visited within each of the chapters. The issue of legality and legitimacy seems only to arise in the discussion of Judith Shklalr’s legalism. This at times makes the book jarring, but the discussions are fruitful and illuminating on particular issues. Each chapter acts as a standalone chapter. Making the book incredibly easy to read. There is no need to read it cover to cover. One can simply choose a chapter that takes their fancy and discover the erudite reflection that Benhabib engages in. It is in short, a wonderful book which will be of interest to any political theorist, philosopher or historian of ideas. That said, there are aspects of the book with which a person with a keen eye to the subject may baulk at.

It is clear that Benhabib owes much to Arendt’s writings, and as she stipulates Arendt is centre stage of the critical examination that Benhabib undertakes. While Benhabib does offer various criticisms of Arendt’s work there is a tendency for Benhabib to be more sympathetic to Arendt than the other figures she speaks of – and that Arendt’s political philosophy might allow. In this sense the book at times feels like a defense of Arendt against the possible and actual criticisms that might be mounted against her. This is particularly evident in Benhabib’s criticism of Rancière’s critique of Arendt (115-118). The most frustrating aspect of this part of the book is not that Benhabib is straightforwardly wrong – Rancière does intentionally misread Arendt, as he does a lot of theorists he engages in – but that Benhabib’s own reading of Rancière does exactly that what she accuses him of – misreading Rancière in order to fit him into a philosophical discourse that does not quite fit Rancière’s own discursive agenda.   The other issue with the book is perhaps more pertinent to this review. The work can be read as an attempt to reengage in the political issues of the contemporary world by exploring certain themes refracted through the individual experiences of the figures Benhabib focuses on. However, besides perhaps the chapter exploring Judith Butler’s ethics of normativity, there is no substantial discussion of the political issues of the contemporary world – such as the ones I began this review with. In essence, Benhabib leaves it up to the reader to connect the dots themselves. However, this is a difficult task unless someone takes into account the material conditions and political differences that shaped migration, exile and statelessness in the era of Arendt, Adorno, Benjamin and Strauss and the material conditions and political differences which shape the contemporary issues of migration, exile and statelessness. This also marks the difficulty of Benhabib’s work. While Benhabib claims that the work of these theorists is marked deeply by their experiences, there is a lacklustre attempt to describe this in terms of the material conditions that shaped their thinking. This of course is an issue of much contemporary political theory and so we should not begrudge Benhabib too much for not engaging in this type of analysis. But it may leave readers engaged in contemporary political theory with a sense of wanting more in terms of how to approach the issues of migration and exile in the world.

I will finish my review with some reflections as to how Benhabib’s work may encourage us to think about contemporary issues of migration and otherness. I suggested above that Benhabib leaves it up to the reader to draw the connections between the historical issues of otherness, legitimacy, exile and migration that affected the intellectual figures she looks at, and the contemporary issues of migration, exile and statelessness. How for instance do Shklar’s theoretical ponderings on fear, cruelty, exile and migration link to those issues in our contemporary milieu is never made explicit. Towards the end of the book, Benhabib states, correctly I might add, that ‘Islam and Islamism have become the principal signifier of otherness in the affluent democracies of the west’ (187) and there is the potential here to make an interesting contribution regarding how our historic reflections on Jewish otherness might provide guidance for Western democracies’ treatment of Islam and Islamism. There is also the possibility that Albert Hirschmann’s writings on exit, voice and loyalty might engender some discussion on the existential threats confronting humanity as a whole. In a time where new political and geographic boundaries are arising – some because of the act of man to build walls, and other because they disappear under waves of ocean, sand and rock – then Hirschmann’s words that the old order must be erased regardless of counterproductive consequences might hold. As Benhabib writes: ‘If all human action to change social conditions results in making them worse, then future action is necessary precisely because of the desperate predicament that we find ourselves in (163). This perhaps summarises the book as a whole. For Benhabib, as for the figures that she studies, there is a hope that is maintained for humanity as long as we work towards bettering our current situation.