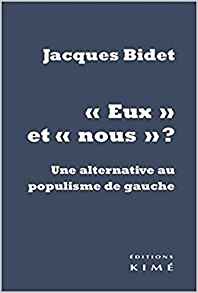 Panagiotis Sotiris works as a journalist in Athens and teaches at the Hellenic Open University. He …

This book represents Jacques Bidet’s attempt to offer a theoretical and political alternative to what the writer defines as left populism. It is not a simple political intervention, but a complex theoretical argument based upon a series of positions that Bidet has proposed in the previous years.

As such it is based on the arguments that Bidet has developed since the 1980s, that include not only his reading of Marx’s capital, beginning with his seminal Que faire du ‘Capital’? (PUF, Paris, 1983, translated into English as Exploring Marx’s Capital, Brill, Leiden, 2007), but also his conception of what he defines as the metastructure of modernity, namely the market and the organizational aspects of modern society, that are the preconditions of the capitalist class structure. This is a theoretical schema that he developed in Théorie de la modernité (PUF, Paris, 1990) and Théorie générale (PUF, Paris, 1999), before returning to combine the reading of Marx’s Capital with the structure / metastructure approach in Explication et reconstruction du Capital (PUF, Paris, 2004).

This theoretical trajectory, which represents one of the most ambitious and interesting attempts towards a general social theory based upon Marxist premises, is the background to the present book.

The first point by Bidet is a return to questions of class. He bases this in the distinction and articulation between structure, which refers to capitalist relations of production, and metastructure which refers to the organizational, interindividual and contractual aspects of modernity. This is based on his conception of capitalism being based upon two important mediations, the market and organization. Bidet defines the capitalist class in a complex way, as relation between exploitation and domination, based upon the ‘productive’ contradiction (the need to produce use values that are also exchange values) but also the ‘political’ contradiction of capitalist production (the complex biopolitics of labour power). However, he also points to another aspect, one that has to do with knowledge, what he defines as expertise [competence]. Expertise is crucial both in the organization of production but also as part of the articulation of hegemony. For Bidet, the emergence of expertise as the basis of a class is very crucial because it points to the vulnerable unity of the dominant class.

For Bidet this is the paradox of a ‘class alliance-struggle’: the popular class has to forge its own unity, including those segments that are precarious or excluded in order to forge, from a hegemonic position, an alliance with the pole of expertise or at least a part of it against the capitalist class.

The mediation between structure and world-system lays the ground for the emergence of forms of subjectivity articulated around nation, race and gender. This is where particular ‘regimes of hegemony’ emerge (115), since for Bidet the structural configuration cannot by itself explain the particular subjectivities that develop at the intersection between relations of class, gender and race.

On this basis Bidet elaborates upon a theory of political parties, recognizing three basic parties, the ‘capitalist party’, the ‘competent / expert party’ and the ‘popular party’, which form the basis of the paradox of a ‘triangular duel’ (119). For Bidet the complexity of the party structure is the result of its emergence at the intersection of class structure and world-system, expressed in the fact that we have a class State which is also a nation state (137). This can explain the emergence of national-populist parties. The emergence of such parties today can be attributed to the retreat of class struggles and citizen participation which leave only national identity as a point of reference. On the other hand, the tendency towards a certain form of global statehood finds its expression in ecologist parties (143).

It is on the basis of these that Bidet attempts to answer whether the idea of ‘party of the people’ has any sense today. Bidet examines how different segments of the popular class react to questions of politics: the disenchantment and refusal to participate in many instances, the identification of workers in small enterprises with their bosses, the tendency of workers in the public sector and the unionized parts of big business towards the left. However the challenge remains for Bidet how to organize what he defines as the ‘third party’ in an analogy to the Third Estate (tiers état) in the French Revolution.

Bidet draws a line of demarcation from the conception of populism offered by Ernesto Laclau and Chantal Mouffe, an approach he considers ‘politicist’ [politiste]. In contrast to their conception of their discursive conception of the formation of a people, he opposes his own ‘realist’ approach (158) which is based upon the theorisation of the convergences and divergences of struggles based upon what he defines as a structural systemic analysis. He insists that such an approach enables the articulation of class struggles with struggles around gender and race. For Bidet the people cannot achieve its own identity simply by facing the heterogeneity of discourses but by ‘deciphering the heterogeneity of its social being’ (165), that is the complexity of the social relations, as relations of class, gender and race that are at the basis of this complex social reality. Bidet thinks that the contemporary thinking about the commons does not offer a way out, and we require a more complex conception of class relations and of the interconnection between the national, the local and the global level.

The ‘third party’ for Bidet is not a traditional party. However, in order to create the conditions of its unity and overcome the many discrepancies and tensions that run through it, a form of political organization is necessary. Bidet thinks that the starting point is the many associative practices of the popular class and the ‘creative disorder’ (180) induced by social movements. However, taking as an example the French movement against the Labour law, the question is how to bring together the ‘philosophical moment’ (that of the nuit debout public meetings), the electoral moment (in formations such as La France insoumise) and the syndicalist moment (the mass movement against the Labour Law [loi travail]). That is why Bidet insists on the moment of organization as a ‘moment of synthesis’ (182).

Regarding the strategic choices of the ‘third party’, Bidet insists that it is not only about collective appropriation of the means of production, but also about the collective appropriation of the means of expertise. Regarding alliances, Bidet insists that the crucial aspect is what he defines as the ‘metastructural strategic axiom’, which implies on the one hand to attack the capitalist power by submitting the market to the organization and at the same time  to control the power of the experts by submitting the organization itself to the democratic decision of all. However, such a political process requires that we go beyond the fetish of both movement and party and think the organization beyond both the movement-form and the party-form.

Bidet stresses the changes that we can see in regards to associative practices. Traditionally, left wing parties had two solid bases: the corporation and the local neighborhood. However, the organization of production has become more liquid and at the same time we have the ‘fluid’ level of the internet which changes in a profound manner the way people express themselves or discuss issues. However, Bidet insists that despite the force of the internet it is at local level where we can still find solid basis for associative practices.  For Bidet at local collectives and struggles we can find the ‘primary places for the individual engagement to the collective and the universal’ (200).

For Bidet the initiatives we need should be oriented towards practices of self-organization and self-education. Moreover, it is necessary to rethink forms of democratic organization and of ‘collective intellectuals’ that take account of the existence of different currents, traditions, tendencies. Bidet insists that it is impossible to think of an ‘ideal’ form of organizing a ‘popular left’; rather the challenge is to ensure the co-existence and convergence of a ‘conflictual diversity […] of different currents of thinking and of particular organizations’ (202).  And the aim cannot be simply ‘taking power’ but to ensure that the people, as fundamental class, govern by means of a process of revolutionising and democratising all instances of the State.

Bidet’s book is an important contribution, both in his attempt to combine social theory and urgent political questions but also in his conception of the people not as ‘discursive construction’ or rhetorical interpellation, but as expression of the structural and ‘metastructural’ conditions of contemporary capitalism. Some of the points he raises, such as his theorisation of expertise might be open to discussion and constructive criticism. On this issue, one can raise the question whether to think of it as a class or as an element or tension running though social relations of production or reproduction. On the other hand, it is important that he stresses alliances and hegemonic relations as crucial aspects of any potential radical politics. At the same time, his insistence upon rethinking the question of organization based upon the associative practices (and potential) of the popular class is an important contribution at a period when we are witnessing an open crisis of traditional forms of left political organization.