Marx & Philosophy Review of BooksReviews‘K-Punk: The Collected and Unpublished Writings of Mark Fisher (2004-2016)’ by Mark Fisher reviewed by Derek Wall 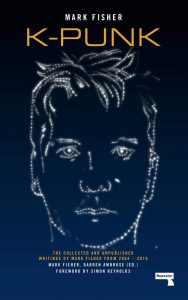 At Goldsmiths College, University of London, I regularly pass a mural outside Warmington Tower on the New Cross campus. Painted with assistance by one of my former students, the words read as follows: ‘Emancipatory politics must always destroy the appearance of a “natural order”, must reveal what is presented as necessary and inevitable to be a mere contingency, just as it must make what was previously deemed to be impossible seem attainable. Mark Fisher (1968-2017)’

Mark Fisher was a Goldsmiths’ lecturer, cultural theorist, imaginative revolutionary, blogger and much else besides. K-Punk collects 800 pages of his blog writings, interviews and other pieces of previously unpublished work. It is eclectic, inspiring and thought provoking. Perhaps Fisher was the Orwell of the early twenty-first century, taking the social temperature of Britain in accessible prose from a left perspective. However his legacy, while of particular local interest, is likely to be far wider.

Britain may not be as well known for the strength of its Marxist movements nor has it bequeathed the world well known Marxist philosophers. While we are not France or the native Germany of Marx and Engels, Britain has nevertheless given residence to a number of highly significant Marxist cultural theorists. Fisher might be understood in this respect as continuing an English tradition, with Jamaican born Stuart Hall and the Welsh Raymond Williams, of cultural theorists who have lived and worked in the UK. Certainly his work as a cultural theorist is interesting, applying Derrida, Lacan and Baudrillard to late twentieth and early twenty-first century pop music, movies and political events.

Most of the pieces in this volume are from Fisher’s K-Punk blog, which can still be found online http://k-punk.abstractdynamics.org. Blogging, which now appears to be largely overwhelmed by Twitter, Facebook, Instagram and other forms of social media expression, felt essential to many of us during the first two decades of this century. Fisher gives the impression that writing short pieces, two or three thousands words at most, often far less, made it easier to put thoughts into writing. The austerity of an academic article referenced and rigorously constructed, we might suppose had a certain place for him. While he also wrote a number of books, blogging seemed to allow him to comment poetically and precisely. His blogging built on the punk DIY practices of the 1970s and 1980s, with reference perhaps to William Burroughs’ cut up literary production. In turn executed in cyberspace, it spoke of rising possibilities in an emerging age of all-pervasive social media. K-Punk is a reference both to music and his connection with Cybernetic Culture Research Unit (Ccru), ‘C’ being ‘K’ in the original Greek. Ccru was a network operating out of the philosophy department of the University of Warwick, kick-started by Nick Land and Sadie Plant, which linked post-structural theory to science fiction and emerging communications technologies.

Pop music was big for Mark Fisher. His engagement with theory came from reading New Musical Express, with some of its writers commenting on the hits of the 1980s with reference to a variety of continental and post-structural thinkers. One large section of the book contains his varied thoughts on pop music. Acts as varied as Roxy Music, Sleaford Mods, Scritti Politti, Test Department and Siouxsie and the Banshees are dissected. Popular music and youth subculture has been a key area of examination for British cultural theorists. While we might be ignorant of some of the music Fisher examined and even sceptical about some of his judgements, where we are more familiar, his work on pop music is significant in placing it both theoretical and political terms. The politics of popular music illustrates Fisher’s understanding that society is both a site of continual contestation and overdetermined.

Fisher suggests that social, political, economic and cultural factors intersect, drawing on Althusser, who in turn took the notion of overdetermination from Freud. In the words of rap artist Paris from Oakland ‘Popular entertainment raises people’, it can be part of a conscious political strategy based on promoting new ways of thinking and revolutionary solidarity. Scritti Politti, literally meaning ‘political writing’, is a reference to Gramsci’s Prison Notebooks and was fronted by Green Gartside, a member of the Young Communist League. Test Department’s ‘Comrade Enver Hoxha’ might be heard as a hymn to Albania’s Marxist-Leninist leader. More subversively, its sampling of Radio Tirana and its videos of military mobilisations point to the propagandist nature of British media and institutions. These observations on Scritti and Test Department are by way of illustration; Fisher’s pieces are detailed, theorised and sophisticated. Another section focuses in a similar way on film criticism.

Fisher is perhaps best remembered for his considerations of how mental health is a political rather than a purely personal matter. His work also attempted to link Freud and Marx. From Wilhelm Reich to Marcuse and Lyotard in Libidinal Economy, there have been numerous, and to varying extents failed attempts to articulate the two thinkers. Lacan might be seen as using Marxist concepts to create his approach to Freud and Althusser used concepts from Freud and Lacan for largely non-psychoanalytical purposes in his body of philosophy. Fisher tends to take an understanding that we are far from unitary and autonomous beings as the basis for many of his points of discussion. He views desire, driven by unconscious or semi-conscious forces, as an influence on economics and politics. The often-esoteric musing of continental theorists such as Lyotard and Deleuze are translated into bright and clear political statements in this collection. His analysis of the UK in the early twenty-first century, his critique of ‘capitalist realism’ and his advocacy of a Freudian-Marxist alternative of ‘Acid Communism’, are informed by such thinkers’ most productive concepts.

Mental health is a central concern. Fisher is frank about his own, sometimes fragile, mental health and rejects the notion that individuals via therapy can in some way be ‘healed’ or made ‘normal’. For Fisher there is no baseline normal and mental health is for him clearly about expansion and plasticity. Referencing the therapist David Smail, he rejects the notion of ‘magic voluntarism’ (749), which he argues suggests that the individuals have full autonomy to deal with their own mental health. Instead, structural and collective forces powerfully shape depression and other forms of mental illness. Fisher sees mental illness as one of the most important problems created by a capitalist society that labels many of us as worthless, promotes stressful competition and piles pressure on to individuals.

Fisher’s cultural analysis, opposition to capitalism and concerns about mental health are linked in his portrayal of ‘capitalist realism’. This is the notion that there is literally no alternative to an individualistic market-based society. He argues that this was a product of the success of Thatcherism in dismantling working class solidarity, but saw its real victory with the election of Tony Blair. Blair’s New Labour, which of course was a form of third way politics shared by other supposedly social democratic parties globally, implied that any alternative to capitalism was unthinkable. Many of the pieces in the collection critique capitalist realism and examine how alternatives that allow us to imagine another kind of society might be built.

The final pages of this vast collection are made up of the unfinished introduction to the book that Mark was writing when he died in 2017, Acid Communism. With reference to the book Red Plenty and autonomist theory, he argued that capitalist realism was about preventing the productive forces of the working class from being released. He argued that the celebration of imagination situated in the 1960s counterculture had to be repressed by the ruling right. While this sounds as if it lacks rigor and is the product of some mystic or drug-induced flight, it is a useful idea. Marx, who rarely appears directly but haunts the whole of Fisher’s writing, is presented in K-Punk, not as an advocate of romantic human essentialism but as promoting an open and malleable nature of human subjectivity. Borrowing from Foucault and Marx, Fisher argues that humans have a plasticity and might take on radically different forms of subjectivity. The capitalist realism which holds that only one kind of society based on economic accumulation is possible, might be replaced by an open and diverse counter future.

Mark Fisher’s work is difficult to summarise and even more difficult to critique. Despite musing about acid communism and borrowings from Deleuze and Lacan, much of his work here is sober, strategic and focussed on the immediate needs of working class communities. If you want a book length, fully theorised and defended thesis about class struggle and the contemporary relevance of Lenin, this volume will not satisfy. While Fisher did write several important books including Capitalist Realism, he was never going to produce his own version of Capital or indeed Negri and Hardt’s Empire. This is perhaps no bad thing. It would have been interesting to have read more about his thoughts on Corbyn, ecological politics and much else besides. While it could be said that the finest flowering of revolutionary popular music is the engaged rap of artists like The Coup, Marxism with hip-hop characteristics, sadly, was not one of Fisher’s passions. However you can’t have everything! Fisher was above all a highly effective educator and sophisticated theory is expressed with clarity and made to do practical work. There is delight and inspiration on virtually every one of the 800 pages here. He embodied that notion that concepts could be used not to just describe reality but might have a material force able to produce new realities.