Marx & Philosophy Review of BooksReviews‘The Apocalypse of Settler Colonialism: The Roots of Slavery, White Supremacy, and Capitalism in Seventeenth-Century North America and the Caribbean’ by Gerald Horne reviewed by Ajmal Waqif 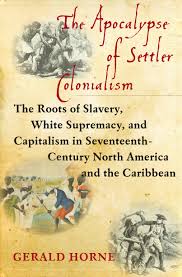 Gerald Horne
The Apocalypse of Settler Colonialism: The Roots of Slavery, White Supremacy, and Capitalism in Seventeenth-Century North America and the Caribbean

Gerald Horne’s The Apocalypse of Settler Colonialism initially appears to be a straightforward account of the role of ‘slavery, colonialism, and the shards of emerging capitalism’ in the rise of England as the first planetary superpower by the eighteenth century (1). In fact, it is the continuation of the thesis Horne first presented in his 2014 work The Counter-Revolution of 1776. There Horne argued that the revolt of 1776 was not a dawn of liberty, but a massive re-entrenchment of slavery and white supremacy. Over the course of the 18th century, and in response to wave upon wave of slave revolts, London was slowly sliding towards abolition. This alarmed the horrendously wealthy slave owners of the American colonies who responded by instigating a more-or-less conscious ‘counter-revolution’. This thesis has often been (mis)interpreted to suggest Horne believed that London was somehow less implicated or even opposed to the historic crimes of slavery and colonialism in the New World. In the Apocalypse Horne aggressively puts such views to rest by tracing the culpability of these crimes back to their source, demonstrating that the birth of England as a modern constitutional monarchy was ‘the dawning of the apocalypse’ for the non-European peoples of the world (161).

At less than two-hundred pages Horne’s Apocalypse takes the form of a wide-ranging, if short historical narrative, providing original interpretations of key Atlantic events and processes. Throughout the course of this narrative Horne consistently returns to several key historical dynamics at work in the development of colonialism, white supremacy, and to a lesser extent capitalism. These dynamics roughly aggregated, constitute the primary themes of Horne’s work.

Perhaps the work’s most apparent theme is the intertwined fates of African slaves and indigenous peoples. Horne avoids readings of Black and indigenous history that stress the specificity of these separate colonial experiences, and is instead keen to emphasise the shared fortunes and calamities of African and indigenous peoples. He points out for example that in the colonial period slavery was both an African and an indigenous experience, with the Spanish enslaving Tainos and dispatching them to European slave markets as early as the 1490s (32). Further along Horne points out the use of the phrase ‘Negroes and other Slaves’ in the texts of anti-slave laws to remind us of the ‘indigenes in this fraught category’ (173). Horne is also interested in the continuities and coincidences of slave and indigenous revolt. In 1654 indigenous Caribs on the French colony of St Vincent fought alongside African Maroons, driving the French from the island and inaugurating perhaps the first decisive Maroon victory (97). In general Maroon communities grew from intermarriage between indigenous peoples and escaped African slaves.

This interest in a unity of experiences shapes Horne’s unique reading of Bacon’s Rebellion. Against the standard radical account of the Rebellion as an uprising that united white plebeian Europeans and African slaves against the East Coast ruling class, Horne reminds us of the deep anti-indigenous impetus that drove Nathaniel Bacon and his settler posse, characterising the rebellion as ‘the subaltern raging against the presumed elite’s lassitude in dispossessing the designated racial “other”’ (145). Horne argues that a wider view of 1676 would reveal a ‘Grand Conspiracy’ (138) among slaves across Barbados which coincided with King Phillip’s War – the English name for the pan-indigenous revolt in New England led by the Wampanoag chief Metacom. Though the simultaneity of these two events was pure chance, Horne claims that indigenous and African fraternity developed in the aftermath of the rebellion when enslaved Wampanoags were sold to Jamaica. He suggests that ‘this deportation policy may have exported revolt…akin to pouring boiling oil on a raging fire’ as the enslaved and seemingly defeated indigenes ‘could then plot alongside ungovernable Africans’ for their revenge (144).

Just as indigenous and African fortunes were intertwined, so too were those of the island colonies and the mainland. Horne points out that the subsequent independence of the mainland colonies after 1776 gave rise to a perspective that disaggregates their history from the islands. The implications of this disaggregation are significant. All the foundational violence of settler colonialism carried out by, variously, the Portuguese, the Dutch, the Spanish, and the English is relegated to a pre-U.S. period, written off as the cruel actions of absolutist European kings. This is an explicit attempt, according to Horne, to let the United States, as the highest expression of European settler colonialism, off the hook. In fact, ‘the United States is inheritor of the munificent crimes of not only London but Madrid, too’ (8).

Another recurring theme is the function of the colonies as a safety valve which displaced the numerous social, political and religious conflicts that ravaged Europe. Proletarians dispossessed at home were compensated with indigenous land; dissenting sectarians became slavers. In a period when levelling ideas were propagated across Europe colonial wealth strategically served ‘to buy a kind of class peace’ as exploited Europeans were able to climb ‘the class ladder with sugar stalks and Africans as the rungs’ (91). Bristolian Quakers found salvation in Barbados and leading Cromwell supporters and regicides escaped to New Haven after the Restoration. It is here that Horne claims an ideology of ‘whiteness’ begins to coalesce. Providing his own historicised definition of this popular but highly fraught term, Horne defines whiteness as an ideology of pan-Europeanism: an invented solidarity between Europeans that transcended class, ethnic, and religious lines (47). This ideology was essential in broadening the base for colonialism and thus ensuring its survival, offering proletarians and religious minorities a stake in dispossession and enslavement. Though far from a straightforward process and apt to be revoked, Catholics, Scots, Huguenots, and even Irish and Jews, were all granted the position of whiteness and its attendant rights in the course of this period. Yet this position was always contingent on the demographic balance between European settlers and African slaves in a particular colony at any given time. If the latter outnumbered the former then the boundaries of whiteness became far more flexible. Horne aggressively calls into question much of the white supremacist mythology surrounding the Enlightenment when he concludes that ‘it was not as if Englishmen became more Enlightened once they crossed the Atlantic Ocean. It was more that the light of fires set by indigenous arsonists and embattled Africans helped to convince these settlers that larger racial stakes loomed’ (51).

Perhaps one of the most compelling themes in the work is the centrality of independent African and indigenous activity in shaping the outcome of major Atlantic events. England’s seizure of both Jamaica from the Spanish in 1655, and New Amsterdam from the Dutch in 1664 were conditioned by indigenous and African revolt. Coastal indigenes clashed openly with the Dutch from at least 1643, with unrest culminating in a massive anti-Dutch revolt which expelled them from all lands west of the Hudson River. The English marched in with ease in 1664 against a depleted and exhausted Dutch colony. In 1655 Spanish slave owners in Jamaica, facing defeat and conquest at the hands of the English, handed their rivals a poisoned chalice by allowing their slaves to form militias and in some cases taking them to the mountains and freeing them so as to continue a guerrilla struggle against the invaders. A large group of these free Africans, led by perhaps the first Maroon chief in Jamaican history Juan De Serras, began ‘pushing an insurgency against London and Madrid alike’ (90), thus setting the tone for all future rebellions in the Caribbean and ultimately the Haitian Revolution.

Horne clearly hints at a dynamic where indigenous and slave resistance determined the form and tempo of colonialism, but the nature of this dynamic is left in the realm of implication — perhaps one of the books greatest shortcomings. Also left to implication is Horne’s analysis of the connections between ‘capitalism and it’s handmaidens: white supremacy and slavery’ (174). Though these ‘handmaidens’ are analysed in detail, there is never an analysis of what services they rendered their dark master. Readers looking for a decisive intervention into contemporary Marxist debates around slavery, colonialism and their essentiality to the development of capitalism, benefiting from Dr. Horne’s veteran communist insight and voluminous knowledge of Black liberation history, will likely be disappointed.

Despite this Horne’s tone is still highly polemical, uncompromising and refreshingly angry throughout. One of his fiercest salvoes is reserved specifically for supposed Leftists and radicals who for various reasons, whether out of crude productivism or liberal white supremacism, rationalise the horrors of slavery and colonialism as tragic historical necessity, ‘supposedly for the advancement of the productive forces or the flowering of bourgeois liberties’ (29). This critique of bourgeois Enlightenment is expanded on in his unique interpretation of the Glorious Revolution of 1688. He argues that the ‘revolution’ was in fact a struggle within the English ruling class over control of the transatlantic slave trade. Merchants dissatisfied with the monopoly held by Charles II’s Royal African Company sought a complete deregulation of the slave trade and its complete opening up to capital. Horne writes ‘this blatant power and money grab by merchants was then dressed in the finery of liberty and freedom, as the bourgeois revolution was conceived in a crass and crude act of staggering hypocrisy’ (172). One doesn’t need to agree wholesale with Horne’s critique of European Enlightenment as an almost white supremacist pragmatism to accept that the evidence presented in this book must irreversibly complicate our understanding of the notion of bourgeois ‘revolution’.

Horne is explicit that his perspectives are political and for the present. Encouraged by the recent phase of struggle and brightening prospects for a future beyond capitalism, Horne feels duty-bound to remind comrades and allies that if capitalism is to be unmade, then those who were originally unmade by it must necessarily ‘be compensated and made whole (somehow) as this elongated process unfolds’ (29).