Marx & Philosophy Review of BooksReviews‘On the Nature of Marx’s Things: Translation as Necrophilology’ by Jacques Lezra reviewed by Terrell Carver 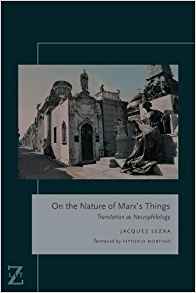 Jacques Lezra
On the Nature of Marx’s Things: Translation as Necrophilology

This book is not for the faint-hearted. It works through long quotations in Latin, German, Spanish and Italian with odd bits of classical Greek into the mix, generally with English translation. Authors cited at length range from Lucretius to Lacan, Abbott and Costello to Althusser. Dickens and Heidegger occur in the same sentence. It philosophises laterally, and philologises literally, taking every opportunity to discuss and compare different translations and ambiguous manuscript variations as a matter of interpretive principle. It is far more about ‘things’ in the most general senses than it is about Marx, though in the two chapters where he features, the ‘things’ under discussion are exceptionally interesting. These ‘things’ arise in the manuscript ‘Introduction’ of 1857, published in the Grundrisse collection, which became familiar in English translation from the early 1970s, though Lezra uses Marx’s doctoral dissertation of 1841 as a curtain-raiser chapter 1.

It is unusual to find a commentator on this now famous methodological ‘Introduction’ connecting the dots between Engels’s Anti-Dühring of the 1870s and his literary engagements with ‘Young Germany’ from 1839, a discussion that mixes Shakespeare with Spinoza. Lezra also tours ‘the Jewish question’ as a matter of long-standing German political debate, citing not just Bruno Bauer but also Salomon and Gutzkow. Marx’s much studied article of 1844 on the subject – get this! – is noted in just the slightest passing mention. All that arises from considering Marx’s 1857 citation of a tag line attributed to Spinoza, Determinatio est negatio, revisited almost verbatim by Engels nearly twenty years later. But with Lezra we get a full-on discussion of how it arises in a Latin translation of a (lost) letter in seventeenth century Dutch. And he segues to a lengthy disquisition on how that proper name functions as a sign for any number of associative flights of fancy, rather gruesomely highlighted with woodcuts and etchings. The discussion of Freud’s and Verdi’s respective ‘Schillers’ comes as light relief.

I loved it all. Some readers might recall that I published an original translation and commentary on the 1857 ‘Introduction’ in 1975 (Texts on Method, Blackwell), a volume rather surprisingly overlooked by Lezra, who also overlooks Stuart Hall’s lengthy appreciation the same text in a Birmingham University Working Paper of 1973. And very oddly Lezra also overlooks Scott Meikle’s Aristotelian/scholastic study of 1985 (Essentialism in the Thought of Karl Marx, Duckworth). Given that Lezra critiques Negri’s work on the text as determinedly Marxist-materialist, as well as the ‘new materialists’ (Bennett, also Coole and Frost) in scathing terms, such omissions reveal a somewhat defective ‘Marx-world’ that circumscribes his otherwise voracious scholarship.

Lezra grounds his approach to Marx’s thinking in the Greek and Latin classics, taken as such when Marx was reading them, viz for his doctoral dissertation on Democritus and Epicurus. But he takes them equally as the basis for the long scholastic tradition of selective reception, where familiar concepts and antinomies guide his reading. Crucially Lezra sees Marx grappling with the standard philosophical ‘saw’ of scholasticism – realism/nominalism, i.e. things tell us what words are correctly vs words tell us what things are correctly. This approach does not reduce Marx’s reasoning to formulaic dichotomies but rather opens it out to suggestive conversations with philosophers that Lezra cites, but are not much cited by Marx, such as F.H. Jacobi and Kant.

Interestingly Lezra’s citations are as much to do with the Schillerian politics of the late eighteenth/early nineteenth centuries in the German states and statelets as with the rather more abstract and timeless realms of philosophical debating points. The virtue of Lezra’s discussion is that it puts Hegel in his place, or rather in the place where Marx found him, and from which Marx made highly selective use. That place was political, which was how the Young Hegelian reading arose to start with.

Lezra’s reading is also philosophically contextual, in that – contrary to most Anglophone perceptions – Hegel had not sublated all hitherto and on-going philosophical thinking, as he claimed, but was rather an adept if overbearing interlocutor and critic. Or in other words, Anglophone commentators have generally constructed a Hegel for Marx that follows Engels’s later reminiscences and formulations rather too closely (and Lenin’s advice rather too literally). Thus they generally take Hegelianism to be pretty much ‘all you need’ in order to get into Marx’s world of political engagement.

As Lezra presents it, Marx was in fact using a very wide range of tools already to-hand, and was not at all spellbound by Hegel or trapped in some wholly or essentially Hegelian outlook or methodology. For his target audience Marx needed to be outside Hegel and thus scholastic in philosophical terms (given that Anglophone empiricisms were not really on offer, anyway were decisively rejected in the later ‘Theses on Feuerbach’). For Marx this was all the better to bring idealist political-philosophising ‘down to earth’ even better than Feuerbach (not to mention Bauer and his Berlin epigones ‘the Free’). And all the better later on to skewer the political economists and their insufficiently critical socialist imitators, such as Proudhon, precisely because the latter thought he was really and productively inside Hegel. Unsurprisingly the later Engels comes off rather badly in Lezra’s whirl of citations, as indeed he should by comparison. Marx had had the gymnasium education and student-days drilled in classical scholastics; Engels was a litterateur (and evident flaneur) in his early years pre-Marx, and an autodidact in philosophy later on in life when he styled himself somewhat disingenuously as the junior partner.

Of course today’s interest in Marx’s 1857 text is in its quite abstract focus on what Marx’s selection of political economists were claiming about ‘productive consumption’ etc., and more importantly, what they were trying to do with their claims. In Marx’s view they were trying ideologically to secure the hypocrisies of commercialised ‘bourgeois’ society that he, on the contrary, was intent on exposing. That aspect of Marx’s thinking – always in aid of his political projects – is rather understated by Lezra, merely mentioned in passing.

Lezra’s project is really to enrich our reception of Marx as a comprehensively cultural thinker, disrespecting the disciplinary boundary-lines of his time and ours. Here is where Lezra puts the scholastic perspective to work, carefully following Marx’s somewhat conversational comments in the 1857 text but parsing them out suggestively at three levels or in three registers. The first is simply referential and scholastically realist, identifying word with thing. And so is the second, where words function abstractly as logical operators in relation to such referential identities. But the third is then nominalist, because Marx takes off into a world where words tell us what things are and orient us morally/politically in relation to the identities and abstractions posited earlier. Or at any rate that is how I am attempting to put Lezra’s account to readers in analytical terms. Vittorio Morfino’s introduction to Lezra’s volume also has a go at this.

But make no mistake. If you want your philosophising, and your Marx, to work from clearly stated premises and presuppositions, to take up clearly defined views and argue through to further clarity, covering clearly defined points of contention, and summarizing clearly stated conclusions, then this book is definitely not for you. Lezra’s approach to Marx rests on constant questioning, energetic scepticism, a devotion to ambiguity and uncertainty, and a drive to get further and further from conventional lines of thought. Or in other words many readers would find this book quite incomprehensible, even somewhat sick-making.

Further chapters in the book take up talking points with Melville, Freud and Adorno, so the volume is somewhat mistitled as a study of Marx’s thinking. Morfino’s introduction keeps up the fiction that the argument is both derived from Marx, and that as subject he is central. The title is something of a pun on Lucretius’s De rerum natura (‘On the nature of things’), and literary reflections on the indeterminacy of translation in the widest sense found Lezra’s own methodology. Evidently his intention was to develop a notion of translation as key to a philosophy of culture that contains itself within language, and to use that to tackle a philosophy that counterposes ‘thing-ness’ and fixity to the play of meaning-making practices through which concepts compose our various realities. Lezra’s Marx is fully in this mode, particularly in the 1857 ‘Introduction’, and thus much more exploratory, indeterminate, undogmatic and exciting – for me, anyway – than he is in over-familiar and rather deadening alternative incarnations. If this sounds good to you, give Lezra’s book a try, or at least have a go at chapters 1 and 2.