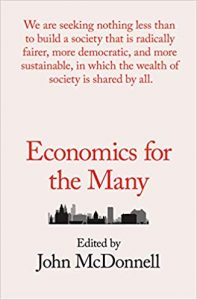 John McDonnell (ed)
Economics for the Many

Economics for the Many edited and with an introduction by UK MP John McDonnell, Labour’s Shadow Chancellor, is a collection of essays by various academics who have contributed to the policy development of a future Labour government. It is an assortment of sensible reforms to, for example, tax collection, regional policy development and trade, combined with various modest castles in the sky. There is notable absence – socialism, which is not mentioned once in the entire collection, a palpable disconnect between the purpose of the book, to fundamentally transform the economy in the interests of working people, and the answers provided.

In the first chapter, Antonia Jennings complains about the difficulties of discussing economics in a post-truth world, believing that ‘poor economic literacy contributes to a democratic deficit’ (27). In what could be construed as a typo given the exclusion of heterodoxy from most curriculums, university economics here is said to be ‘not fit for purpose’ as its teaching is overwhelmingly ‘heterodox’. In difficulty illustrating the point, if the economic literacy of economics professors is illiterate, what is gained from a familiarity with it? In any case, the theoretical disputes within economics will not be overcome by an appeal to reason or even commonsense. In the subsequent chapter, Simon Wren-Lewis advocates Labour’s Fiscal Credibility Rule, a version of Gordon Brown’s golden rule that limits extra spending except investment to amounts, around 2.5% of GDP that can be easily raised through taxation. It is supposed to ensure a balance between spending during booms and slumps. Wren-Lewis notes that such a balance is unnecessary given the assumptions of Modern Monetary Theory (MMT) and indeed the wider Keynesian tradition. Indeed, no amount of guarantees around fiscal rectitude will salve nervous financial markets, so why make this appeal at all? Thereafter, Prem Sikka points out how much tax is avoided by multi-national corporations and explains some key steps to address that avoidance. Ann Pettifor presents a catastrophic justification for a Green New Deal, pointing out that the effects of climate change are already evident. She telescopes the impact however, asserting that the threat will directly impact the economy now. The whole point seems to be that short-term climate effects remain unlikely to precipitate recession in the short term. However, it can be countered that action is needed now precisely because its immediate effects are not evident. Nonetheless, her solution, which amounts to an extra £40bn a year in investment spending is wholly inadequate in comparison with her warning (77).

Costas Lapavitsas explains the problems of financialisation, the dominance of finance over manufacturing with in the UK economy with strong echoes of the Bennite Alternative Economic Strategy (AES) of the 1980s. Lapavitsas produces figures for the quantity of debt which paradoxically show that the private sector debt load has declined markedly since the financial crisis of 2008. It is the public sector that is now indebted although even here, the load is offset by Quantitative Easing. The Bank of England has printed around £400bn since 2008. Could this not provide a source of funds for investment in the economy and society, a so-called People’s Quantitative Easing? This idea has been widely raised by Keynesians and the radical tax movement. There is no discussion or even mention of McDonnell’s continual preference for monetary conservatism. Lapavitsas instead argues that the solution to financialisation is to create public banks to invest in designated sectors of the economy. Rob Calvert Jump argues for municipal and co-operative ownership and nationalisation of certain key monopolies like the railways, to be introduced by an Industrial Common Ownership Act (124). This continues the theme of Labour’s Alternative Ownership Proposals, published by McDonnell, which sees a wider role for co-ops and municipal ownership under some form of democratic accountability as a way of challenging the rule of finance capital. The proposals are no real alternative and could well become a limit on advance for any future Labour government.

Grace Blakely and Luke Raikes argue for the devolution of economic decision-making to the regions as economic and other decision-making is too London centric, reflecting the dominance of the City in the UK’s economy. This is followed by discussion of alternative ownership models. The assumption is that the old style post-war nationalisation of the major industries is not something to which we ought to return, but the alternatives are unclear. This is where these new ideas could again limit the scope of a Labour government. Compared with privatisation, nationalisation, where the state guarantees funding, does not set profitability as a precondition for that funding and ensures fundamental work rights such as national trade union bargaining, which would be a major step forward. The alternatives presented here are schemes like the “Preston Model” of the local council, where the council has mitigated the effects of the cuts through spending locally and using its pension fund to invest in environmentally friendly schemes. This may have slightly offset the impact of austerity, but it has still implemented it. Any Labour government must be predicated on the abolition of austerity altogether.

Further discussion features the threat of Artificial Intelligence (AI) in supporting tech monopolies, and problems with private and public debt and issues of data protection. What is really striking however is the abandonment of any idea of a new socialist world altogether. All of the various schemes presented are predicated on the dominance of capital. Traditionally, the socialist minimum programme is limited to immediate steps within the framework of capitalism: individual rights, necessary regulations and social reforms. The maximum programme is the socialist future itself. The two stages are linked as the impact of the minimum programme raises aspirations among the oppressed class, the working people, challenges capital, and so leads to the other stage. The proposals presented here never escape the limits of the market and if implemented would constrain any Labour government to a hotchpotch of reforms which patch capitalism up rather than replace it with a new society, an explicitly social future.

J Christopher Proctor, as part of the “Rethinking Economics” group, tries to explain the short-comings of neoclassical economics, although he does not actually provide a definition of it. Proctor claims, ‘one of the key innovations of neoclassical economics was that economic value derives not solely from the cost of producing something, but also from how much people want that thing’ (206). In actual fact, neoclassical economics is predicated on scarcity; quantities of commodities are assumed, not produced. They are initial endowments that are given. Prices do not in fact depend on supply, but allegedly upon marginal utility. They are subjective rather than objective. Neoclassical economics rejects the notion of economic value. Values have no measure. Surplus is not explained but assumed. Nonetheless, Proctor considers the neoclassical approach as ‘quite good’ (210) for studying markets. His critique of its application to the macro level repeats some commonplace criticisms. As with Jennings, the reader is left to wonder of what this alternative economics consists.

Ozlem Onaran discusses the proposals of the Women’s Budget Group and how investment in the national accounts is limited to certain types of capital goods rather than in people, child care, education and caring, jobs traditionally undertaken by women. Nonetheless her proposals repeat the notion that ultimately spending in these areas is justified by ‘higher national income, higher productivity and eventually higher tax revenues’ (226). This is a weak defence. Investment in social services does not create surplus value and workers cannot afford the services the state provides while much of what has been deemed to be “women’s work” remains unpaid. Either way it is unproductive from the point of view of capital, but so what? It is highly productive from the point of view of women and the working class. That is its justification and nothing further needs to be said. Guy Standing discusses the concept of a universal income, a palliative for the radical transformation of society we really need.

The ascension of Corbyn and McDonnell to the Labour leadership was as unexpected as it was welcome. Its positive effects are already manifest in the Tory crisis around Brexit. Any Labour government elected now would have a mammoth job reversing the effects of austerity. This is the essence of Labour’s minimum programme. Labour can go far further than the 2017 manifesto simply by ending austerity as promised. This will open people’s eyes to the possibility of a whole alternative socialist world. That is the point when the ideas presented here will have an impact, not in advancing the movement but in limiting the scope permitted by the theorists. These theorists are themselves a product of the highly privileged and economically conservative academic world. Their existence determines their consciousness too.

Some of their points about various reform proposals are well made, but the further the discussion moves from the everyday the weaker it becomes. What seems very radical and alternative now is firmly predicated on the existence of the market and will prevent measures that challenge or threaten that market in the future. The fact that socialism, a real alternative society and different world, plays no part at all in these alternatives is telling. Economics for the Many, in the words of McDonnell, aims to ‘inspire people with an alternative’ to neoliberalism by showing that another world is possible (21). Another world is possible but the arguments for it remain to be made.