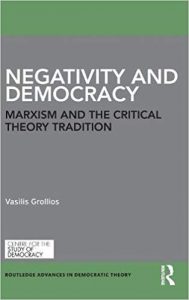 Although it may seem otherwise, the critical theory of the Frankfurt School tradition has had a rather indirect relationship with theories of democracy. There are no abundant direct treatments of this topic in the work of its early members, and perhaps with the exception of Marcuse, its treatment is more of a questioning of certain very specific aspects of liberal representative democracy, which today often seems to be taken as an immutable form of political organization.

Without a doubt, the place theorists of the Frankfurt School have given to democratic theory is provided by the experience of German fascism. Despite their fierce criticism of western democracies,a formidable reality they faced was fascism. Concentration camps and the murder of millions of Jews were two key elements to which a theory of democracy seemed to be put behind.

On the other hand, critical theory understood that offering a positive program of social transformation was likely to limit the free development of negativity, the deployment of those critical intellectual forces that posed a threat to domination and fascism. On the basis of the critique of identity thinking, any closed and detailed model of an alternative world had to fall by definition in a system similar to that of totalitarianism.

However, within Negativity and Democracy: Marxism and the Critical Theory, Vasilis Grollios tries to rescue what he considers to be a tradition within critical theory of questioning of bourgeois democracy and of the proposal of an alternative world, a practical realisation of utopia. To do this, Grollios reconstructs that tradition which started in Marx’s critique of bourgeois democracy in the second half of the nineteenth century proceeding until the later contributions of Frankfurt School authors Herbert Marcuse and Ernst Bloch.

It is apt that in this type of reconstruction Marx is situated as the founder of critical theory. Marx was the first to apply a varied form of the Hegelian dialectic to social and material problems. In the history of philosophy he is the first attempt to grasp an entirely materialist theory of society in which all its possibilities comes from an radical immanent analysis of social contradictions. As such, trying to reconstruct Marx’s theory of democracy constitutes one big problem of Negativity and Democracy: if such critical theory is intended to be a materialist critique of the living conditions that make up society and the individuals which comprise it, then Marx’s critique of bourgeois democracy in the second half of the nineteenth century simply serves to clarify the origin of this theory without explaining the fundamental aspects of the crisis of western democracies today.

The reason for this deficiency of reconstruction is precisely the big difference between the material conditions in which Marx develops his theory and our own. If Marx’s critique was located in a highly technologically industrialized capitalism orientated towards the production of commodities, today we face a capitalism that every time receives fewer and fewer benefits from commodity production, and more and more through fictitious capital such that the relationship between capital and labour is increasingly inscribed by other types of social relations (e.g. gender, national, linguistic, cultural, etc.).

At the same time however, this is one of the greatest merits of Negativity and Democracy: to rescue the idea that Marx’s critique is not only determined by the capital-labour relationship but that it is also a commitment to democracy. In other words, while readings which had understood that the contradictions between productive forces and production relations composed a fundamental field of development of negativity, Marx explains that these are connected in turn by struggles for the conquest of social and political rights, which is frequently forgotten by a certain Marxian economism for which the transformation of ownership relations of the means of production appeared as sufficient for the abolition of capitalism.

Another merit of the book is to have a broader framework from which to develop the reconstruction of Marx’s theory of democracy. Grollios takes the logic of the perverted, inverted and topsy-turvy world of Volume 3 of Das Kapital to obtain a different focus for democratic theory. If Volume 1 is determined by the circuit of M-M’, the idea of the topsy-turvy world puts the issues not at the level of the critique of political economy but on terms of the consequences of that critique. In other words, to substitute political economy for a new version of that critique of alienation, already presented in the 1844 Manuscripts, Grollios escapes from the vulgarities of twentieth century Marxism, especially the Soviet version of it, for which all social problems could be reduced to the terms and concepts of classical political economy. With this new ground adopted by Grollios, social problems cannot be viewed just with the conceptual tools developed by Marx in Volume 1 of Das Kapital.

In other words, although one of the main traits Grollios highlights in all of the authors of the book, it is still a too abstract point of view. The element of immanent critique, so well explained in Grollios’ section on Adorno, and which can be seen as one of the axes of the reconstruction of the theory of democracy, is still a concept that works only in the field of theory. It is not a practical one. To give one example, in the section on Lukács the already mentioned reconstruction of his theory of democracy lacks explanation on the relationship between the preponderance of the Communist Party and the role it had in the first decades of the twentieth century, and more particularly within the context of the Russian Revolution.

But we could see the problem also in the reconstruction of the Frankfurt School Grollios presents. Having here the critique of identity thinking as the pivotal point from which to make the reconstruction, the theoretical approach is ill-suited to influence practical action. Although concepts of praxis could have been useful for new theoretical perspectives on democracy, they are hard-pressed to be derived out of this theoretical framework.

What must be understood here is that there is a possibility to rethink the reconstruction Grollios makes in Negativity and Democracy beyond the history of social practices that have been conceptualized here in a too theoretical manner. What if, for instance, we establish the necessary connection between every single concept presented in the book as the result of a concrete, historical and immanent process? What does it mean, for example, to establish the necessity of the criticisms of capitalism by Horkheimer and Adorno even in the midst of the defeat of real socialism as itself a real alternative to capitalism?

In sum, the necessary reconstruction of the theory of democracy made by Grollios, while a tool for emancipatory change, seems underused. Keeping the history of concepts of practical change to an inner field of philosophical thought, diminishes their great power under a conceptual control that fails to let them become practical concepts. But even more: a strictly philosophical and theoretical treatment of concepts such as immanent critique, capital or democracy won’t allow them to become historical practices, real and material social relations, institutions, concrete struggles and conflicts, all real processes that occur to real people. To do this, critical theory, and philosophy in general, would have to return to the conviction that what is important, as Marx said, is not to simply interpret the world but to change it.