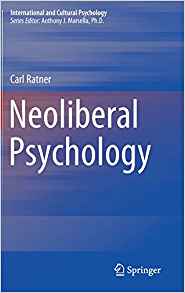 Nick Malherbe is a researcher at the Institute for Social and Health Sciences, University of South …

The discipline of psychology presents a considerable history of involving itself in exploitation and oppression. British colonial violence in India, South Africa’s racist apartheid regime, and the horrific acts of torture undertaken in Guantanamo Bay are just some instances where psychology has acted in the name of a murderous and imperial State. This is, of course, not the whole story of psychology. There have also been numerous efforts to pry the discipline from its bourgeois and violent impulses, and to reconstitute it for the purposes of liberation. Working in this latter tradition, Carl Ratner’s book, Neoliberal Psychology, offers provocative, interesting, and at times flawed, insights for re-making psychology.

In the preface, Ratner notes that his book is broadly concerned with ‘the psychology of people living in neoliberal capitalist society’ (ix), and how advanced capitalism embeds within us a neoliberal subjectivity. It should be noted that although the ways by which psychological phenomena are shaped by – and, in turn, shape – society is not a novel area of study, the notion of a fundamentally neoliberal psychology is one that has certainly been under-considered, even within critical psychological scholarship. This ‘failure of the discipline’ (xiii) serves as the book’s point of departure.

As a means through which to explore neoliberal psychology, Ratner relies on his earlier work on ‘macro-cultural psychology’, which attempts to revive the materialist approach to psychology as developed by the Soviet psychologist Lev Vygotsky. With Vygotsky’s work largely ignored by psychologists working today, Ratner makes a convincing argument for the place of macro-cultural psychology in examining how culture (including, for his purposes, neoliberal culture) organises and structures human psychology. He illustrates this point by use of a number of familiar examples, such as how anxiety embeds itself within the fabric of neoliberal capitalism, as well as the ways by which happiness has become tethered to neoliberal self-actualisation. As might be expected from someone working from within the discipline of psychology, Ratner takes on a somewhat descriptive tone here, which jars with some of the more visceral, experiential writing on capitalism and mental health, such as that of the late Mark Fisher.

Looking to both China and the United States, Ratner uses macro-cultural psychology to examine how neoliberalism works through political economy, education and ideology (the latter of which seems to mean little more than ‘false consciousness’ in the book) to shift our psychological capacities in the direction of structurally-blind individualism. With psychology’s relative aversion to considerations of capital, Ratner’s book succeeds in allowing the reader to see the texture and pervasiveness of neoliberal doctrine as it exists in our institutions, communications, governance, scholarship, bodies and mental health.

There is a notable vitality to much of Ratner’s writing. This is observed in his frequent use of exclamation points, his explosive outrage at wealth inequality, and the energetic manner by which he races through different, usually related, topics (on page 78, for instance, democracy, policing and the psychologising of children are hurriedly covered in just three paragraphs). The tremendous passion with which Ratner approaches his subject matter undoubtedly enriches – if also, at times, overwhelms – readers of this well-organised book. All of this, I believe, is ultimately to the book’s strength.

There are, however, a number of aspects of this book that I found to be myopic and even outright problematic. Most exemplary here is Ratner’s consideration of ‘hookup culture’ on college campuses. Appearing to focus primarily on young women (with no adequate reason given for this), he notes that because hookup sex confines liberation to individual sexual freedoms, while negating meaningful human connection, it remains a fundamentally neoliberal phenomenon. Although there are perhaps shades of truth to this, it remains striking that the author seems, for the most part, to dismiss out of hand the patriarchal character that so much hookup culture assumes. With very little consideration given to gender and power, hooking up, for Ratner, is only ever able to function as a transactional, market-like exchange. Issues of radical feminism, the high rates of sexual violence on college campuses and the bourgeois and/or neoliberal rendering of much romantic love are mostly, if not entirely, ignored in the author’s analysis of so-called hookup culture. Such economic reductionism misses an important opportunity to analyse the gendered dimensions of neoliberal psychology, which – along with its racialised constitution – are touched upon too briefly in the book.

Another issue I had with this book concerns the manner by which ‘culture’ is engaged. In the absence of an explicit definition, culture becomes, in Ratner’s rendering, broad enough to encompass anything systemic or institutional. This makes it difficult to refute much of what is being said. Indeed, surely no psychologist would disagree with the fact that their discipline must take into account structural issues? This all-encompassing deployment of ‘culture’ does not enable the reader to delineate clearly how macro-cultural psychology might differ from, say, micro-cultural psychology (would the latter be of any use politically?), or to determine how and if such a psychology differs from the more formalised sub-field known as cultural psychology. Additionally, I feel that the book’s analysis would have been enriched somewhat if Ratner had explored culture as artefact, art and aesthetics. How might this other understanding of culture influence neoliberal psychology and, more importantly, how might we co-opt it for the purposes of anti-capitalist struggle?

The book, unlike so many others working from within the critical psychology paradigm, appears to look to the future in a constructive, even prescriptive, manner. Ratner rejects teleology, emphasising that our emancipation ‘does not automatically unfold from the present’ (180). He also correctly notes that genuine emancipatory struggle cannot emerge from within the institutional confines of psychology. If psychologists are to change the neoliberal nature, as well as the neoliberalising tendencies, of their discipline, they need to work beyond it. It is only through developing a clear-eyed, analytical understanding of neoliberalism – and, for that matter, socialism – that we may return to the discipline and use it to better conceive of neoliberalism as a psychosocial determinant. In short, we can begin to conceive of a psychology that exists to dismantle, rather than sustain, neoliberal capitalism, and that works to intervene in and change our neoliberal psychology.

Neoliberal Psychology is a book that opens up a number of important questions concerning capitalism in relation to psychological functioning as well as psychology’s disciplinary legitimacy. While these questions are not always answered adequately, it is through their asking that psychologists may begin to better harness the emancipatory capabilities of their discipline, while remaining aware of its fundamental limitations. Although Ratner’s analyses, at times, fall short of considering the fullness of neoliberalism, he has begun to develop a conceptual language of sorts which may allow us to properly locate the role of psychology in resisting the neoliberalisation of the human psyche, culture and the discipline of psychology itself.