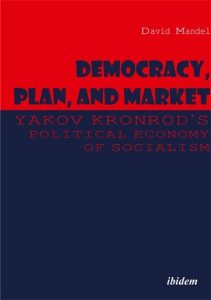 In this slim but rich in content book, political scientist David Mandel sympathetically revisits the ideas of Russian political economist Yakov A. Kronrod (1912-1984). This involves an unusual and complicated feat of scholarship. To understand why, let us consider some of the hermeneutic aspects involved.

Marx and Engels never wrote a blueprint for socialism, since they thought that the form socialism would take would depend on how the working class actually responded to the crises of bourgeois society (19). Unexpectedly, a Marxian political economy of socialism was born amidst war and revolution in Czarist Russia, and not in Western Europe. However, while lively economic debates still occurred in Russia during the 1920s, gradually all dissenting viewpoints were squashed by the communist party-state. From 1928, Stalin effectively ruled as dictator. This created an abnormal and deformed development of socialist economics, in which valid scientific insight became badly distorted by ideological belief systems, brute force and political expediency. When, after Stalin died in 1953, Kronrod emerged as a leading academic, he was still constrained by official doctrine, even as he tried to free himself from its dogmas.

As a commentator on Kronrod’s work, Mandel himself is not an expert in socialist economic theory. However, unlike most Western Marxists, he has frequently visited and taught in Russia, is fluent in Russian and well read in Soviet history and politics. Most of Kronrod’s writings are in Russian, and very few were ever translated. Except for a few selected anecdotes, factoids and comments, Mandel remains silent about Kronrod’s life story, about the historical/political background or about the significance of the major works he published before the mid 1960s.

Mandel’s book is not about Kronrod’s life and work as a whole, but focuses specifically on Kronrod’s “swan song”: five selected texts from the last 20 years of his life, of which four were written while Kronrod was prohibited from publishing and which were published only posthumously (17). One of these manuscripts is Kronrod’s substantive 1972 essay “Socio-oligarchism – the pseudo-socialism of our time”, which Mandel translated especially for this book. This essay is not just a socialist indictment and condemnation of the Stalinist project, but also a Marxist attempt to explain the rise and decline of the nomenklatura that ruled Soviet society. Kronrod himself actually wavers in his manuscripts about the crucial issue of whether the Soviet economy should be regarded as “socialist”, “proto-socialist” or “non-socialist”. His final judgment remains rather unclear (18).

Mandel does not provide ‘an exhaustive presentation of Kronrod’s work’ (17). Yet he does try to summarize parts of it, in four chapters, which are presented as a general overview of Kronrod’s political economy of socialism. However, within the mentioned formats and circumstances, it becomes difficult for the reader to evaluate (a) how accurate, fair, authentic or reliable this “overview” is or can be, (b) how well Mandel has really understood Kronrod’s intentions, (c) to what possible errors of interpretation could be attributed.

Providing a condensed “overview” was itself a challenge for Mandel, not in the least because of Kronrod’s penchant for abstruse theoretical language. Kronrod’s agility in presenting theoretical innovations as the natural, logical outcome of Marxist-Leninist orthodoxy no doubt contributed to his initial career successes, but in his manuscripts he often ends up conflating what is (Soviet reality) and what ought to be (the socialist ideal) (18).

To top it off, nonchalant editing, typographical and spelling errors and unsystematic referencing in Mandel’s text make it look more like a tentative, unfinished “work in progress” or Samizdat document, rather than like a well polished book that stands or falls by its own content. One gets the impression that Mandel tackled a project that was bigger than he could successfully complete, that he would like to invite interested readers to take up the story and flesh it out more and that he wants to provoke readers to reconsider their cherished interpretations and follow Kronrod’s lead, to develop a better Marxian political economy of socialism.

Few people today know about Kronrod. He was the son of a Jewish merchant from Tula. His family shifted to Moscow in 1923. From 1928 to 1930, he attended a college for social science teachers. He wound up working for Gosplan and the Central Statistics Agency and then joined the Institute of Economics of the USSR Academy of Sciences, where he gained a degree with a thesis on the balance of the national economy.

When in 1941 the armies of the German Reich attacked Russia a second time, Kronrod enlisted as private soldier and served as machine-gunner in the battle of Moscow. He survived and fought on, at Stalingrad and elsewhere. After the final victory of the Red Army, he returned from East Prussia to Moscow with the rank of major, and rejoined the Institute of Economics. He received a PhD in 1956 for his treatise Money in a Socialist Economy, and became head of the theory section at the Institute. The rest of his academic career was mainly devoted to working out a general theory of a socialist political economy.

Kronrod captured attention from Western observers in the post-Stalin era of the “thaw” because he was regarded as a “pro-market, reform-oriented” intellectual. After the political backlash against the “Prague Spring” in 1968, Kronrod was criticized by communist leaders for “ideological errors”. His institutional section was downsized and in 1971 he lost his job and his staff altogether (13). He was demoted, and could no longer publish anything significant.

Academic denunciations of Kronrod (and other heretics) became common practice, or even obligatory. This, however, did not stop him from writing. Indeed, what Kronrod wrote as an ostracized intellectual provided Mandel with his approach four decades later. After glasnost, perestroika and the collapse of the USSR, which he did not live to see (he died in 1984), Kronrod was rehabilitated in Russia. He is nowadays often regarded as a visionary intellectual, or as a precursor to the likes of Gorbachev and Aganbegyan.

Readers may well feel puzzled and wonder what exactly motivated Mandel to dig up, reconstruct and publish this podvig? Mandel gives five reasons. First of all, in the decade of the “thaw”, Kronrod’s socialist political economy broke through the straightjacket of Stalinist dogma, and he was forcibly marginalized for his doctrinal heresies at the end of the 1960s (19). His story, never detailed in English before, is of scientific interest for Western Sovietologists, Marxists and economic historians alike. It proves that a sophisticated Soviet Marxist school on the political economy of socialism existed.

Secondly, Kronrod’s heretical writing sees a vital role for markets in socialism, in contrast to most Western Marxists who uphold the idea that commodities, money and finance have nothing to do with socialism (20). Kronrod argued that once popular democratic power and socialised property exist, the nature of markets itself is transformed by new social relations so that they no longer exploit and oppress.

Thirdly, Kronrod explicitly projects a humanistic and democratic socialist alternative to capitalism, rejecting the idea that any collectively planned economy makes a vast, oppressive bureaucracy necessary and inevitable. He insists strongly that popular democracy and civil liberties are essential for any workable socialism. The real debate isn’t primarily about state versus market but about how power, status and authority are organised in society (20, 128)

Fourthly, Mandel discovered amazing similarities between the theories of Kronrod as a Soviet Marxist authority and the theories of Trotsky’s Left Opposition in the 1920s and 1930s (129). Both defended the crucial role of Soviet democracy and markets in a socialist economy. Both similarly analysed the bureaucratic degeneration of the Soviet Union – condemning Stalinist tyranny, but continuing to believe in the viability of socialism. Both were also eventually persecuted and repressed by the official Communist parties.

Lastly, Mandel is himself a senior member of the Fourth International (Usec) and he wants to stimulate a dialogue about socialist political economy between Trotskyism and other Marxisms around the world (134n). He implies that they might have much more in common than they think – if they really think things through to the end. In Fourth International (Usec) style, he hopes that one day Kronrod’s scientific testament will be taken up by movements of popular resistance against capitalist inequity (135).

The best parts of Mandel’s book are the introduction (11-21), the translation of Kronrod’s essay (77-126) and the conclusion (127-135). Less convincing are his summaries of Kronrod’s theory (23-76) about the interplay between planning, the law of value, markets, freedom, equality and democracy (based on what Kronrod thought at the time of the Kosygin reforms). These are inadequately referenced, do not evince scientific understanding and are disconnected from the international discussions in the twentieth and early twenty-first century about socialist economic management. Crucial concepts are often not explained properly and there are numerous vague or question-begging assertions that will not satisfy economists concerned with the technical “hows” and “whys”.

The overall impression is that Kronrod partly remained within a neo-Stalinist engineering mentality, believing that a socialist system can be viably imposed on people, provided that it is based on the correct principles. He seems to have concluded that where socialism failed, it was because the wrong system was imposed on people with the wrong principles (rather than applying the right principles). Yet, there are also hints that Kronrod understood that the starting point for socialism must be that the economic system should really meet people’s needs in a viable, sustainable and preferably optimal way, using whatever methods that are available and best suited for the purpose. That is, socialism starts with the needs that capitalism cannot meet.

Any system which is forced on people by a militarised oligarchy, disregarding the needs, rights and wishes of the masses, does not have long-term viability. Popular support and cooperation will be lost and the modus operandi will be discredited. Kronrod’s generation was never in the position to restart things with a “clean slate”. They inherited a system built under Stalin’s dictatorship and that is what they had to work with.

Mandel’s appraisal is erudite and his intentions are brilliant and provocative. Unfortunately (as often happens in Fourth International circles), the project is rather badly executed, confuses as much as enlightens, and therefore fails to communicate sufficiently and thereby persuade. Key scientific issues are drowned in a wash of verbosity and abstract rhetoric. There is much more to this story than the author has stated. Yet, Mandel is surely right that socialism is not inevitable. People – real, living people – have to make it.