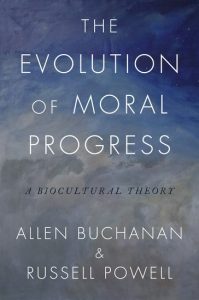 Allen Buchanan and Russell Powell
The Evolution of Moral Progress. A Biocultural Theory

Jeroen Hopster is a Postdoctoral Researcher in Philosophy at Utrecht University, The Netherlands. …

This book is neither about Marx nor Marxism, yet it will be of interest to any reader who, like Marx, is interested in the phenomenon of progress, and the material conditions that underlie it. Allen Buchanan and Russell Powell, philosophers with respective specializations in the fields of ethics and the philosophy of biology, offer a novel ‘biocultural’ theory of the conditions amenable to moral progress, and take issue with so-called ‘evoconservative’ views according to which our evolved psychology imposes severe constraints on the possibility of progress. A central component of our evolved moral psychology, the authors argue, is a flexible capacity to be either favouritist towards one’s own group at the exclusion of others, or to be inclusive towards other groups and their members. Focusing on a conception of moral progress understood in terms of gains in moral inclusivity, the authors identify which conditions are conducive to moral progress and which are adverse to it. Their emphasis on the cultural flexibility of our in-group / out-group psychology provides an original angle to the debate on the origins of human morality, and offers an important corrective to some leading theories in the field of evolutionary ethics.

The book consists of eleven chapters, divided in three parts. In the first part the authors rehabilitate moral progress as an important and unduly neglected topic of philosophical inquiry, and provide various nuances about the topic. They maintain that progress is disunified: in the moral sphere progress may consist, for instance, of improvements in moral reasoning, better moral concepts and changes in the definition of morality itself. Given this disunification, and given the fact that moral principles and values cannot easily be ranked, it will be difficult to provide global progress assessments. Instead, the authors set themselves the more modest task of providing a local assessment of progress.

Their analysis specifically focuses on one kind of progress, which has occurred especially over the last 250 years: a move towards greater inclusivity, or what is often referred to as our ‘expanding circle’ of moral concern. The authors grant that while not all gains in inclusivity amount to progress, many of them do. In taking this stance they rely on substantive ethical assumptions, of a broadly liberal moral outlook. This might make for some queasy among readers who do not share the same moral outlook. However, these readers can still appreciate what I take to be the book’s key contribution: to analyse and explain under which conditions a move towards more or less inclusivism is likely to occur.

In the second part of the book Buchanan and Powell advance their ‘biocultural’ theory. This theory relies on the evolutionary background hypothesis that human morality evolved in a competitive intergroup environment. The authors are sympathetic to group-selectionist explanations of morality’s origins, the evidence of which comes from a variety of sources. Perhaps most importantly, we see traces of it in our evolved psychology, of which “pa­rochial altruism” – a combination of in-group favouritism and out-group antagonism – is among the most cross-culturally robust features (130). But as Buchanan and Powell emphasize, we are not ‘hard-wired for exclusivity’. Instead, we have evolved an adaptively plastic capacity to develop either exclusivist moralities or inclusivist moralities, which are differentially triggered depending on environmental conditions.

In advancing this view, the main opponents the authors seek to rebut are so-called evoconservatives: those who argue on the basis of appeals to evolution that our potential for genu­inely inclusive moralities is severely limited. Evoconservatives underestimate the flexibility of our exclusionary tendencies, Buchanan and Powell argue: even if parochial altruism is an evolutionary adaptation, this need not give rise to any strict constraints on our capacity for moral inclusion. Additionally, Buchanan and Powell target proponents of the view that morality is purely strategic, and that we merely attribute moral standing to outsiders because engaging with them is beneficial to cooperation, and ultimately conducive to evolutionary fitness. According to this idea of ‘strategic morality’, which the authors associate inter alia with the writings of David Gauthier and Philip Kitcher, moral progress is achieved only when humans expand the circle of co-operators to include new strategic partners. This emphasis on strategic partnership is misguided, Buchanan and Powell argue: even if morality was largely strategic at its Pleistocene inception, this is no longer so. Morality’s current functions differ from the evolutionary functions it originally served. We have developed a capacity for “open-ended normativity”: a capacity to reflect on and revise our moral norms and behaviour in ways that are not constrained by evolutionary fitness.

Especially illuminating about Buchanan and Powell’s biocultural theory is their analysis of the conditions that are likely to lead to an inclusivist moral response, and those likely to lead to moral exclusivism. The latter include environments that resemble conditions that where recurrently present in the ‘environment of evolutionary adaptation’ (EEA): physical insecurity, high parasite threat and intense intergroup competition for scarce resources. Such conditions will tend to be very unfriendly to the development of an inclusivist morality. Hence, we can think of an exclusivist moral response as a condi­tionally expressed trait which develops under specific environmental conditions – conditions that were in the past reliably correlated with out-group predation, exploi­tation, competition for resources, and disease transmission (189). Importantly, given that human behaviour is influenced by material conditions as well as ideas and ideologies, this exclusivist response can also be triggered by the belief that such conditions presently exist.

Under more favourable conditions, such as the conditions we have witnessed over the last few centuries, an inclusivist stance tends to prevail. This is not to deny that in recent centuries we have also witnessed major periods of moral regress, such as the increasing racism that followed the abolition of slavery, or the exclusivism that accompanied the rise of the eugenics movement. Yet these periods can well be explained in terms of their biocultural theory, Buchanan and Powell argue. Xenophobic and racist behaviour typically emerged in periods of severe economic downturn, when EEA-like conditions became more prevalent. The use of dehumanizing metaphors – excluded minorities have often been associated with parasites – suggests that demagogues have an implicit subtle grasp on human moral psychology to trigger disgust reactions and exclusivist responses. Importantly, recognizing which environmental conditions contribute to moral regress also provides us with a recipe for preventing it – essentially, by preventing the occurrence of harsh EEA-like conditions, or the perception that such conditions exist.

In the third part of the book, Buchanan and Powell emphasize the importance of institutions to fuel and stabilize progressive achievements. Institutions may not only serve to facilitate peaceful cooperation within groups, but also between them. Markets and security arrangements have served this function over the course of human history, and in modern times the human rights movement has been especially effective as an instrument to advance moral progress. The authors also engage with a somewhat different topic: the debate on human enhancement and the work of the ‘evoliberal’ bioethicists Julian Savulescu and Ingmar Persson, who argue on evolutionary grounds for the view that our present-day moral capacities are severally limited, and should be enhanced by biological means. Like evoconservatives, evoliberals fall in the trap of thinking of human nature as overly constrained by our evolutionary heritage, Buchanan and Powell argue. While the possibility of biological moral enhancement should not be excluded from the outset, a more plausible route towards moral progress is to change environmental conditions to favour inclusivist responses.

The evolution of moral progress contains several stimulating discussions and proposals. Various claims the authors make are likely to spark further discussion; some issues call for further elaboration. One such issue is the role of substantive ethical assumptions in their theory. For instance, while the authors grant that greater inclusivity does not necessarily amount to greater progress, they do not provide clear guidelines for differentiating between progressive and regressive instances of greater inclusivism. A more elaborate account of their moral epistemology would be helpful in this respect.

Another issue of some contention is the authors’ view that non-human animals are merely passive recipients of human decisions. The authors use the acknowledgement of the moral standing of non-human animals as a paradigmatic example of moral progress. Moreover, they take this example to be particularly striking because animals do not contribute to solving the ‘problems of interdependent living’. We have extended our moral concern to them in the absence of strategic reasons for doing so, which seems to conflict with the central thesis of authors who endorse a more robustly functionalist account of the evolution of moral norms. But contra Buchanan and Powell, arguably our moral attitudes towards animals have been fuelled by the historical dynamics of our co-habitation, including animals’ own responses of like and dislike at certain types of treatment. The moral status that is increasingly bestowed on non-human species may be more deeply intertwined with concerns of in­terdependent living than the authors suggest.

These are, however, relatively minor issues, which may serve to nuance some of Buchanan and Powell’s claims, but do little to undermine the book’s importance and the plausibility of its central thesis. The book contains gestures towards additional projects the authors plan to undertake in expanding their biocultural theory, and ends with an appended list of suggestions for future research. Further progress is still upon us.