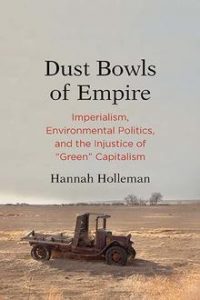 The Dust Bowl, a decade-long trial of drought, dispossession and diaspora that afflicted portions of five U.S. plains states in the 1930s, occupies a unique place in the American imaginary. Enshrined in the songs of Woody Guthrie and the Grapes of Wrath narrative of John Steinbeck, the Dust Bowl is remembered by most today in almost Biblical terms, as a time when hordes of plucky “Okies” made an exodus from their dust-covered farms to the green promised land of California. Many living Americans now speak proudly of their forebears as heroic Dust Bowl survivors.

Hannah Holleman’s Dust Bowls of Empire effectively challenges this exceptionalist mythos from multiple historical, sociological and ecological perspectives. The author, a professor of sociology at Amherst College, shows instead that the Dust Bowl should be seen as the logical conclusion to a “New Imperialism” beginning in post-Civil War America and spreading worldwide, featuring land expropriation, destruction of native soil ecosystems and domination of indigenous populations. As the author writes, ‘[t]he common denominators across the world, from North to South America, Australia to Africa, and Southeast to East Asia, were not climate and geography, but capitalism and colonialism.’ (54)

The Dust Bowl had historically immediate origins in the decade preceding the 1930s, as the author amply documents. A post-World War I decline in demand for agricultural commodities led to lower prices, which encouraged plains farmers – who were frequently indebted to both absentee landlords and banks for their equipment purchases – to intensify production on the land. The emergence of a globalized market spurred the conversion to monoculture, cash crop farming, which made farmers more vulnerable to fluctuating commodity prices. Mechanized “deep plowing” farming techniques caused increasing stress to the often thin layer of topsoil on farms in the plains region. Moreover, government guidance on, and financial support for, prudent agroecological practices was virtually non-existent; President Hoover, for example, believed that soil conservation should be pursued voluntarily.

Nevertheless, Holleman’s analysis mostly avoids this sort of micro-history for a wider lens, as it is rooted in the historical materialist tradition. She acknowledges a considerable intellectual debt not only to earlier environmental sociologists of the Dust Bowl like Donald Worster, but also to “eco-Marxist” writers like John Bellamy Foster often found in the pages of Monthly Review, who have used Marx’s concept of the “metabolic rift” between man and nature as the key to understanding capitalism’s degradation of the Earth. While there have been earlier epochs of significant soil erosion (the author cites the development of early river-basin civilizations in the second century BCE, and the expansion of capitalist monoculture across Europe beginning in the sixteenth century as examples), the rise of industrial capitalism in the nineteenth century intensified the need for cheap land and labour among colonizing states. This fostered an attitude among European and American elites that viewed the control of nature as part of a “White Man’s Burden,” which became an integral component of the quasi-religious doctrine of Manifest Destiny first articulated in the 1840s.

The abolition of slavery following the U.S. Civil War spurred capitalist elites to seek new sources of cheap labour and land on which this labour could be used to produce cash crops for a burgeoning world market. The author documents a multi-decade erasure of indigenous tribes and nations during this period from territory that is now part of the U.S., beginning with the Homestead Act of 1862 that empowered the military to remove native peoples; followed by the Dawes Allotment Act of 1887 that redistributed three-fourths of remaining indigenous lands to white settlers; concluding with the Supreme Court’s 1901 ruling that lands still occupied by the Kiowa, Apache and Wichita tribes (at the Dust Bowl’s center three decades later) could be opened for settlement. Settlers with an eye for quick profits and little understanding of local soil conditions rushed into this “terra nullius” with predictably disastrous results. In this respect the Dust Bowl tragedy was, as the author writes, ‘the inevitable outcome of an expansionary society where the people in power promote, enshrine in law, and treat as sacrosanct certain ideological assumptions in order to justify their practices, social position, and the economic order over which they preside.’ (75)

How did Americans respond to the Dust Bowl tragedy, and have its most important lessons been learned in the U.S. and abroad? Those questions preoccupy much of the second half of Holleman’s book. The Roosevelt administration that was swept into office in 1932 did bring the full power of the federal government to bear on the problem of soil erosion, and the plight of southern plains farmers generally. Agencies created during this period, including the Soil Conservation Service, the Farm Credit Administration and the Civilian Conservation Corps all played a positive role to some degree in ameliorating farmers’ suffering and restoring swathes of damaged land. Unfortunately the racism that accompanied many other New Deal initiatives of the Roosevelt administration afflicted these as well; black and indigenous farmers’ needs were frequently overlooked in favor of those of white farmers. (Though this discrimination, it should be noted, also spurred growth of an agrarian socialist movement that had been rising in the region among poor white, black and indigenous farmers since the early twentieth century, as other historians have chronicled.) Progressive leaders like Henry Wallace, secretary of agriculture during Roosevelt’s second term, set up wide-ranging plans coordinating conservation, medical outreach and education for Dust Bowl farmers. Wallace even attempted to institute more democratic land-use planning procedures. Many of these programs were later defunded by Congress however, due to opposition from wealthy white landowners and the corporate agriculture lobby.

The social and ecological contradictions that brought us the Dust Bowl in the 1930s remain with us today, to an even greater degree than before. Earth has lost half of its topsoil in just the past 150 years, while most of the world’s soils, according to a U.N. report from 2015, are currently in either fair or poor condition. At the root of this problem, Holleman emphasizes, are the same attitudes of racialized domination and capitalist exploitation of nature’s resources seen earlier. Much of the modern mainstream environmental movement has regrettably accepted the premises of so-called “green capitalism,” which proposes technocratic solutions that never question capitalism’s internal mandate for unlimited, exponential growth. Compounding the problem, the leadership ranks of some environmental organizations are staffed with those from privileged backgrounds, who often identify with economic elites and have no experience with the oppressions of capitalism. This reluctance to challenge the status quo in turn affects environmental policies at the international level; most G20 countries, for example, never took up the U.N.’s call following the 2008 crash to devote one percent of their GDP to green development, while the national commitments of the 2015 Paris Agreement remain voluntary, inadequate and unfulfilled.

‘Our approach should be unapologetically radical,’ the author writes at the end of the final chapter, ‘which simply means, from the Latin, that we must get to the root of things.’ (163) Her image is an apt one for environmental justice: just as keeping vegetation rooted to the soil prevents erosion, so will a “radical” focus on the rifts that capitalism causes in our metabolic relation to the Earth be our best path to a livable planet for future generations. Dust Bowls of Empire should, in short, be required reading for all who study the dialectical relations between politics and ecology. Holleman brings not only a passion for justice, but also a Marxian perspective to her subject in lucid, jargon-free prose that will be accessible to all audiences. Her book is a much-needed corrective to the all-too-common tendency of mainstream media to treat environmental disasters as isolated, ahistorical events.