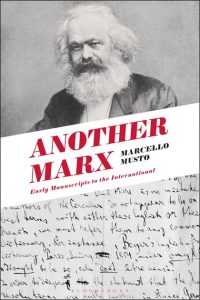 Marcello Musto
Another Marx: Early Manuscripts to the International

Years ago in one of Marcello Musto’s graduate classes he told us that there are ‘many Marxs and many Marxisms’. Indeed, true to the dialectical tradition, with the proliferation of interpretations of Marx’s thought, it seems that we never come across the same Marx/Marxism twice. Musto has provided us with yet another Marx in his book Another Marx: Early Manuscripts to the International. But his Marx is a vivid one, the fruit of rigorous philological research over many years. Some of this work is already published and more is forthcoming, and he hints at his ultimate aim in a footnote: ‘a complete intellectual biography of Marx’ (4).

The book opens with a discussion of the contemporary Marx revival and his prediction that ‘the renewal of Marx will continue’ (4). The character of Musto’s research on Marx and the seriousness with which he approaches it is evident in his claim that it was his studies ‘of the published and as yet unpublished corpus of MEGA2 [Marx-Engels Gesamtausgabe]’ which ‘nourished the underlying conviction of the present volume: that many paths remain to be explored, and that, despite frequent claims to the contrary, Marx is not at all an author about whom everything has already been said or written’ (4). One of his primary aims with this book, of course, is to foster discussion of interpretations. In particular, he seeks to challenge ‘philologically unfounded’ ones (6). His attempt ‘to offer a more exhaustive account of the formation of Marx’s thought’ is not limited to this book and he promises further work on ‘the research in the last years of his life’ (5). This is the topic of his book The Last Marx (1881-1883): An Intellectual Biography (Musto, 2018).

Another Marx is divided into three main parts: ‘Intellectual Influences and Early Writings,’ ‘The Critique of Political Economy’ and Marx’s ‘Political Militancy.’ Musto begins with Marx’s childhood and youth. He places him in the context of his broader cultural environment and the immediate circle of people that influenced his outlook on life, philosophy and early political leanings, including his experiences as a student during his time in Trier, Bonn and eventually his intellectual intercourse within the milieu of the Doctor’s Club and Left-Hegelians in Berlin. His narrative twists through Marx’s initial encounters with political-economic theory, his intense period of work in Paris in 1844 and the important manuscripts from this period; his maturing economic research in the early 1850s, when his life increasingly becomes one of hardship; his drafting of the Grundrisse manuscripts, experience with the 1857 crisis and further development of method; his political reflections in his journalistic writing for the New York Daily Tribune; and a detailed account of the circumstances and struggles surrounding the writing of Capital which, incidentally, express a key reason for this intellectual biography: ‘The critical spirit with which Marx composed his magnum opus reveals just how distant he was from the dogmatic author that both most of his adversaries and many self-styled disciples presented to the world’ (168). Throughout this narrative, Marx’s suffering with disease, poverty and related struggles is a recurring theme. Musto also fills in the history of the period in which Marx was absorbed in a feud with Karl Vogt, providing an interesting look at Marx’s personality as reflected in this work.

Arguably, one of Musto’s greatest accomplishments with this book is that he showcases Marx’s revolutionary ‘political talents’ and activity in a refreshing and enjoyable way (174). This is expressed through his role in the International Working Men’s Association (Musto includes information on the organization’s history, composition, internal politics and divisions, crisis and demise), as well as Marx’s conflict with Bakunin, all of which are situated in the context of the international politics of the time (e.g. the advent of the Paris Commune). The book closes with an analysis of Marx’s thoughts on the question of whether communism can develop in Russia without first passing through a stage of capitalist development (i.e. what scholars call the ‘multilinearity debate’) and the dogmatic Russian Marxists who claimed that Marx believed it could not, whereas Marx maintained that it is not necessarily required.

Those interested in a philosophical engagement with Marx’s work will find that Musto exaggerates the significance of a method of ‘careful philological examination’ (43). Consider, for instance, the case of the Economic and Philosophical Manuscripts of 1844 (EPM). He claims that ‘nearly all readings of [the EPM] have either ignored or treated as unimportant the philological problems they present’ (42). While it is true that to ‘separate [the EPM] from the rest [of Marx’s manuscripts], to extrapolate them from their context, may […] lead to errors of interpretation’, comprehensively understanding them requires a more thorough analysis of the philosophy in them (45). Musto’s philological method leads to a misleading periodization of Marx’s thought in a way that separates and abstracts moments in its development. The way in which he treats Marx’s philosophical reflections in these early writings as ‘only [an] initial stage in his critical trajectory’ overlooks the extent of their relevance as a foundation for Marx’s ‘mature’ thinking (6). For example, Musto claims that in the EPM Marx’s ‘idea of communism remained highly abstract. At some point, he described it as the “negation of the negation,” as a moment in the “Hegelian dialectic”’ (39-40). But this ‘abstract’ set of ideas are deeply complex and writing them off in this way does not explain them; nor does it explain how these reflections in 1844 are connected to the expression of those ideas in Capital (cf. chapter 32 of the first volume).

To his credit, Musto assails the idea that there was a fundamental ‘intellectual break’ from Marx’s early period. Nonetheless, Musto’s method leads him to posit a kind of break in Marx’s intellectual maturation with his idea of Marx’s movement from ‘critical philosophy to revolutionary practice’ (45). Musto claims that ‘Marx’s thought underwent a decisive evolution during his year in Paris. He was now certain that the transformation of the world was a practical question. […] He bid farewell forever to philosophy that had not reached this awareness. […] From now on, his […] conclusions were not speculative but directed toward revolutionary action’ (47-8). The usage of ‘speculative’ here and elsewhere (e.g. pages 35 and 49) suggests its colloquial meaning, and there is no discussion of its specific meaning in Hegel’s thought (which, in a word, entails the recognition of ‘the positive in the negative’). It necessarily follows that a more comprehensive view of the relationship between Marx’s revolutionary theory/activity and ‘speculative’ thought in the Hegelian sense is left unexplored along with the abundant evidence which indicates that an essentially Hegelian ontology and epistemology is an integral component of Marx’s ‘mature’ philosophical thought. Some of this evidence is included in section 4.5 on Marx’s search for a method in which Musto points out how Marx identified Hegel with the correct method and insightfully claims that Marx’s criticism of him in the ‘Introduction’ to the Grundrisse is unfounded (by comparison, Marx’s attempt to distance his thinking from Hegel’s philosophy in the EPM is not afforded as much scrutiny). Musto nevertheless does not recognize that the ‘Introduction’ is one of many examples of Marx’s ‘speculative’ thinking. He also claims that with Marx’s ‘Crisis Notebooks’ [1857-58], ‘it is possible to change the conventional image of a Marx studying Hegel’s Science of Logic’ – even though he was (cf. Marx’s letter to Engels dated 16 January 16 1858), which Musto is aware of – but such philological arguments in themselves produce only superficial insight into the nature of Hegel’s influence on Marx’s thought (85). Ultimately, this kind of critical reconstruction of Marx’s writings forces us to question the limitations of a philological approach. It reminds us of Marx’s criticism of Lassalle’s ‘philological finery’ when he was commenting on the latter’s book about Heraclitus. He claimed that, ‘Since most philologists are not possessed of the speculative thinking dominant in Heraclitus, every Hegelian has the incontestable advantage of understanding what the philologist does not’ (Marx, 1983: 260).

At times, Musto pushes the rigorousness of his philology to the point of redundancy – such as, for example, when he points out that one of Marx’s letters ‘is mistakenly dated 19 January 1958’ or that ‘Marx completed the proof corrections [of the first volume of Capital] at 2:00 a.m. on 1 August 1867’ – giving the impression that this book is most suited for academics with a focus on Marxology (98; 164). With this level of rigorousness however, he has also effectively employed a meticulous collection of personal correspondence and biographical information in order to provide a revealing image of Marx’s life and times during the periods in which he was writing key works. This makes it especially useful for novice, albeit serious, readers.

On the strength of his philology, Musto recognizes a non-dogmatic spirit in Marx. At the beginning of the book he claims that ‘Marxism has often distorted [Marx’s] thought’, but by the end, when he describes Marx’s encounter with Marxists who misrepresented his theoretical position, it appears that Marx’s aversion to Marxists is such that all Marxisms fundamentally diverge from his way of thinking (4). While Musto reduces this issue to the fact that those particular Marxists were wrong from Marx’s own perspective about a given question, a deeper grasp of Marx’s philosophy indicates that the more or less dogmatic philosophical attitude required for upholding any kind of Marxism is inconsistent with a key feature of the ‘dialectical’ philosophy that Marx practiced: radically critical engagement with theory which results in its sublation.