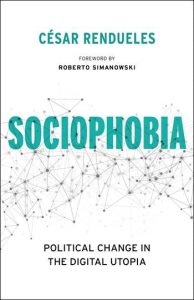 Jamie Ranger is a DPhil candidate at St. Hugh’s College, University of Oxford. His thesis …

Cesar Rendueles argues that the great ideological cliché of our time is the idea that advancements made in communication technologies, specifically the way in which the internet has ingratiated itself into our everyday lives, are of net benefit to those who, from a broadly left-wing political position, wish to improve our economic and political conditions. In opposition to this notion, Rendueles argues that the internet, rather than augmenting reality, actually diminishes it, reducing our ability to see the interdependence of our social relations, and thus impedes the developments of the care-giving institutions required to ameliorate the suffering caused by contemporary neoliberal capitalism.

Sociophobia, broadly described as a ‘universal bias’, denotes the general belief that traditional communities, and the forms of solidarity that are culturally inscribed, are in some way deficient, backward or unnecessary in a world where transnational capital reigns supreme, running roughshod over the racialized legacies of colonialism, and a vast global communications technology system has been implanted. Rendueles’ conversational writing style, whilst refreshingly readable and accessible for a non-specialist audience, lacks a certain discipline which allows for the free flow of ideas with light segues between topics, and reinforces the necessity of Roberto Simanowski’s foreword, by way of introducing the work and situating it within a broader philosophical context. You can flick to any page in the text, and find a stand-alone thought experiment, tidbit from history, or critical presentation of an idea, and gleam an insight, but a cohesive and clear argument structure is sorely lacking. I can quite plausibly imagine a reader being convinced of both Rendueles’ expertise and his viewpoint, without being able to pinpoint how or why. Simanowski’s foreword ends by arguing that Rendueles’ essay is an ‘explosive blast’, ‘an unspooled hypertext that does not give thinking even a moment to come to rest’ (xii), a sentiment I wholly agree with.

The first chapter (confusingly not chapter one) is called Ground Zero: Sociophobia. In terms of an emotive polemic against global capitalism, I cannot recall reading any better: a blistering critique of the status quo, referencing the horrors of the ‘Victorian holocausts’ of European colonialism, the racist depiction of those colonial subjects as barbarians at the gate that persists as institutional racism to this day, it produces a counter-history to the mainstream liberal narrative of the broad expansion of civil freedoms and prosperity out into the globe from a western pivot. Rather, the history of global capitalism is the history of the global panopticon, where citizens have been socially engineered into passivity more than ever before, where meek attempts to render the global economic system as something beneficial for those at the thin end of the wedge has led to ‘the point of creating a planetary dystopia [that] has doomed modernity to being unable to address much broader issues, such as the sources of personal fulfillment, hatred, and subjugation and the possibility of a non-oppressive model of fraternity’ (21). Rendueles may be preaching to the choir, but the general argument that ‘postmodernity has sped the destruction of traditional social ties, throwing the continuity of employment, interpersonal relationships, and political loyalties up in the air’ (23) reads as plausible analysis for those on all sides of the political spectrum.

Chapter one, ‘Digital Utopia’, presents the conventional narrative of neoliberal capitalism, that the ubiquity of the internet is a positive means of promoting social change, contested by Rendueles’ scepticism. He notes that ‘the prevalent image of the internet as a privileged platform for fostering democracy, participation and cooperation has repeatedly run up against reality’ (37). Access to the internet is often framed by corporate and state actors as integral to any modern pursuit of an educated population, and yet most studies reveal that when granted internet access, users drift towards distracting themselves with entertainment and pornography; it draws the user to frivolity like a moth to a flame.

Cyberfetishism is used as a sociological codeword for ‘Wired’ magazine subscribers, those who say things like ‘we’ve got to disrupt the market’ without irony, those with Elon Musk biographies on their shelves alongside ghostwritten books written by turtlenecked entrepreneurs, those who ‘claim that technology is vitally important- though, judging from their arguments, its influence seems to be exerted magically’ (31). However, Rendueles is particularly concerned that this sentiment exists on the political left as well, rightly noting that is ironic that those elite Ivy League scholars who endorse open source software and argue against intellectual property rights would ‘become icons of protest movements and engaged citizenship around the world’ (31). Rendueles’ central argument in this chapter is that for the all the talk of hacktivism and the ‘copyleft’ movement, ‘the relationship between the financialization of the economy, the transformation of intellectual property into public property, and the shift in the content commoditized by the copyright industry has not been fully acknowledged by advocates of free culture’ (51). More specifically, the old gatekeepers may be dying, but the lack of new gatekeepers means that artists, musicians, coders and creatives are leaking into the gig economy, leaving them uncompensated for their work, and monopolized at the level of distribution, rather than production.

Chapter two, ‘After Capitalism’, moves towards the other problem that Rendueles has with the contemporary left: cyberutopianism, framed as the solution to the problem of authoritarianism in paternalism, and an attempt to use developments in communications technologies to merge a socialist vision of a world where social relations are guided by solidarity with free personal development. He argues that the view is appealing because it ‘conceives of the present as the result of a fruitful, nonviolent break with the past’, that we are the ‘lucky heirs to technological shifts with important social and perhaps political side effects’ (99). It is only towards the end of the text that arguably Rendueles’ most important underlying claim slips out: ‘socialism’s rejection of morals is an attempt to match the asymmetry between the magnitude of the social and material forces that condition our actions and our capacity for ethical intervention’ (111). This reveals that Rendueles is really arguing against the classical Marxist position, where ethical norms are not transcendent, but embodied in our social practices; however, the contemporary left is unashamedly moralistic, as is most contemporary activism, as is the specific example of the 15M anti-austerity movement. The contemporary left is supposedly both illiterate in terms of historical materialism, but also wedded to a politics of emancipation based in class interests, rather than ethical principles. This reads as Rendueles having a particular problem with a particular sect of scholarship (copyleft activism) and deciding that it applies to the left in general, an issue with many left-critiques of the left (here’s looking at you, Slavoj).

To read Rendueles in 2019, the text originally written in 2013 and translated into English in 2017, fundamentally changes our perception of the initial premise. The idea that contemporary left-wing movements have exchanged their socialist commitments for a ‘postmodern’ embrace of techno-consumerism is at complete odds with the reality within these movements, even as these activist circles fill out with millennial digital natives replete with mastery over handheld devices, meme discourse and coordinated ‘connective action’. Charitably, we may read this text as an anticipation of a more digitally-conscious left evidenced by the likes of Nick Srnicek’s Platform Capitalism, Dominic Pettman’s Infinite Distraction, and Paolo Gerbaudo’s work on digital social movements, but his uneasy conflation of neoliberal individualization and internet ubiquity belies a borderline communitarian fetishization of the ‘good old days’, which are cited without evidence, a self-evident gesture towards nostalgia for a time which may not have existed in earnest at all.

Coda ‘1989’ concludes the text with a provocation: many had assumed, and indeed much research has been done in the field of digital sociology, that the 15M anti-austerity movement in Spain could be partially attributed to information technology. Rendueles argues the opposite, that the movement was a reaction to ‘consumerist cyberfetishism’ (162). He is right to argue these mass movements had to transcend the logic that a link, a retweet, an angry forum post, would be political action sufficient to induce change.  Nonetheless, I cling to the view that millennial anti-capitalist action is nonetheless supplemented by a proficient, diligent and politically-conscious use of information technology to drag virtual dissent into offline assembly. There is a distinction to be drawn between the sharing of online petitions and online protest organisation, and that may not be a consequence of digital technologies, but rather the continuation of the already existing distinction between liberal and socialist activism.

Ultimately, the subtitle of the text ‘political change in the digital utopia’ is a misnomer, as Rendueles argues rather that the change that those favourable to digital technology believe to be happening is in fact the continuation of the neoliberal condition by other means. Nonetheless, is there not a strain of capitalist realism to the claim that we ought to abandon our contemporary technological reliance, and return to our traditional modes of collective care-giving? To paraphrase and transpose Bertolt Brecht’s famous radio quote, ‘the public was not waiting for the internet, the internet was waiting for the public’, the solution cannot be to deny the digital to affirm the analogue, but rather, to ask ourselves, what kind of public would be ready and waiting our contemporary technologies?