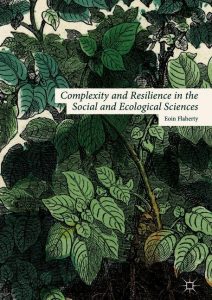 Eoin Flaherty
Complexity and Resilience in the Social and Ecological Sciences

Climate change, far from being a distant problem that will plague future generations, is with us already. California has been burning with forest fires destroying the homes of the rich and not so rich. As I write Australia is suffering from extraordinary temperatures and extreme and unusual weather is becoming the new norm. Associated ocean acidification and rising sea levels from carbon emissions point to more chaos. Climate change denial on the right is increasingly common from Trump in the USA to Bolsonaro, the newly elected, Brazilian president. In turn, social movements challenging climate chaos including the Extinction Rebellion protests in the UK and climate school strikes in countries such as Belgium and Sweden are mobilising. So how do Marxists theorise climate change and other ecological problems, so as to advance effective action?

Eoin Flaherty, an Irish environmental sociologist, provides a sophisticated account of social-ecological theory. Building on a variety of theoretical perspectives he focuses on approaches that are united by their emphasis on systems thinking and the need to combine perspectives from both social and natural sciences. In trying to promote more sophisticated approaches to green politics, that go beyond ‘green is good’ and ‘Trump is bad’, both Marx and Elinor Ostrom, the political economist who won a Nobel for her work on the management of the commons, ought to be regarded as key thinkers. In this vein, Flaherty’s work is particularly attractive, which as presented in this rigorous, appealing and clear text, advances both ecosocialist and Ostrom’s insights.

Flaherty argues that a systems approach, while unfashionable within the discipline of sociology, is useful for conceptualising ecological-social interactions. However he is critical of functionalist approaches from the likes of Talcott Parson that describe society as one holistic structure that works ultimately for the good of all. While the turn to post-structuralism has challenged systematic attempts to understand society, Flaherty suggests that a fragmentary notion of human society fails to give us access to social reality. Climate change is not an accident but might be conceived as an effect of wider forces which can be theorised, at least in part, as a product of a capitalist social system based on short term profit and wasteful neglect of the environment.The book outlines with care a range of approaches to systems theory and challenges both the naivety and determinism of the earliest crude attempts to do so. The chapter on Marxist approaches to social-ecological systems theory is of particular interest.

The perhaps traditional assumption of greens that Marx was a Promethean thinker concerned with promoting rapid industrialism with no thought for environmental quality, has been challenged in recent decades. Marx and Engels collected works contain varied passages showing concern for the environment. Deforestation, air pollution, food adulteration and especially soil erosion were subjects flagged up with attention. In volume three of Capital, Marx noted, ‘Even an entire society, a nation, or all simultaneously existing societies taken together, are not owners of the earth. They are simply its possessors, its beneficiaries, and have to bequeath it in an improved state to succeeding generations.’ (Marx 1981: 911) Engels, in The Dialectics of Nature observed, ‘Let us not, however, flatter ourselves overmuch on account of our human conquest over nature. For each such conquest takes its revenge on us’ and went on to recount a series of ecological disasters from soil loss caused by Alpine forest cutting to potato blight (Engels 1987: 459).

While ecosocialist texts have multiplied in recent years, Flaherty focuses, rightly to my mind, on the contribution of John Bellamy Foster. Foster, an editor of the socialist journal Monthly Review and a sociologist, argued that Marx did not just show environmental concern, but that ecology is at the heart of Marx’s work. Publishing the monumental Marx’s Ecology in 2000, Foster identified the concept of a ‘metabolic rift’ as a particular contribution of Marx to ecological debates.

Marx argued that metabolisms exist between humanity and the rest of nature, which were disrupted by capitalism. Typically there was a metabolic rift because the cycle of food growing and the recycling of human waste was broken with human sewage being flushed away rather than used to fertilize fields. Marx’s concern with soil fertility and human waste spoke of a more extensive intuition that the interactions between humanity and the environment might be disrupted by capitalist growth.

A growing theoretical literature has attempted to develop a Marxist account of social-ecological processes. Flaherty describes a number of these noting the work of Jason M. Moore in books such as Capitalism in the Web of Life. Moore has married the insights of Bruno Latour with the world systems theory of theorists like Immanuel Wallerstein, into what he has termed a ‘world-ecology’. While Flaherty outlines and to some extent celebrates Moore’s work, it would have been useful to have read a more detailed account of the dispute between Foster and Moore. Moore, building on Latour, has argued that the metabolic rift is a Cartesian distinction, which divides humanity from nature and should be rejected. While Moore argues that humanity is part of nature and even capitalism is a force of ecology, Foster’s response has been to suggest a retreat on the part of Moore into a naïve approach to ecology and society.

The debate around humanity as part of nature is dealt with, at least, implicitly in Flaherty’s discussion of the philosophical stakes of research methodology. He takes a critical realist approach, a philosophical stance first developed by Roy Bhaskar. Critical realism suggests that both social and natural science can be approached with an understanding that society is a product of nature. However different dimensions of ‘nature’ can be studied with different methodological tools.

Flaherty, in embracing critical realism, argues that despite their differences, approaches such as those of Foster and Moore need to link over all systems analysis to careful case study work. Studying both the natural and the social, even if such distinctions are challenged, requires combining methods from a range of disciplines, both semiotics and soil science. Like Elinor Ostrom in her productive work on social science method, Flaherty argues that a diversity of different perspectives and methods can be embraced to promote research. An eclectic Marxism might be a more productive Marxism.

While Flaherty’s text is illuminating, a number of slight criticisms can be made. The importance of a critical realist approach would perhaps have merited an entire chapter. Its particular assumptions are interesting and important but open to critical challenge. For example, while critical realism can be seen as an out growth of Althusser’s methodological work in Reading Capital, other readings and developments are possible. Althusser’s materialism came into conflict, perhaps, with his rationalism. Critical realism can be seen as stressing the rational, i.e. looking for underlying but often hidden structural causes. Althusser’s rationalism seems to have given way to a materialism that focuses on effects, a materialism of immanence that contrasts with the critical realism pursuit of essences. This conflict might provide a productive means of exploring contrasting methodologies. Equally, the naturalism of thinkers like Althusser and Spinoza might provide a basis for an ecological or green materialism. Despite the efforts of Arne Naess and more recently Hasna Sharp in her Spinoza and the Politics of Renaturalization, this approach seems still undeveloped. What might be termed ‘deep green Marxism’ could have provided another provocative basis for discussion in Flaherty’s book.

In turn, how can we utilize the literature around social and ecological systems to inform practical political interventions? Green politics can often appear naïve and under theorised but the development of ever more sophisticated models might in their complexity move us further away from precise action. The development of social-ecological systems literature is important and Flaherty does a useful job producing an almost encyclopaedic survey. Yet perhaps even a crude reading of the basic insights of Marx and Ostrom might provide a more immediate accessible set of tools for a practical green politics. The possibility of ecological management of the commons and the intersection between society and the rest of nature emerge from a reading of these perhaps otherwise varied thinkers.

A genealogy might be written of a hidden stream of practical ecological radicalism, via Machiavelli to Lenin and beyond. Lenin, perhaps surprisingly, was a champion of conservation, promoting wildlife parks in post-revolutionary Russia. Machiavelli gives us an account of politics based on a metaphor of climate change, noting in Chapter 25 of The Prince:

I compare fortune to one of those dangerous rivers that, when they become enraged, flood the plains, destroy trees and buildings, move earth from one place and deposit it in another. Everyone flees before it, everyone gives way to its thrust, without being able to halt it in any way. But this does not mean that, when the river is not in flood, men are unable to take precautions, means of dykes and dams, so that when it rises next time, it will either not overflow its banks or, if it does, its force will not be so uncontrollable. (Machiavelli 2019: 83)

Lenin, however can be seen as a thinker who studied the complexity of a social situation as a means of enabling precise political action. Ecological complexity can be dizzying along with the difficulties of understanding how social interactions can be theorised. Capturing this to enable political action is both challenging and essential. Flaherty does an excellent job of making these debates both more precise and more accessible.