Marx & Philosophy Review of BooksReviews‘Hinterland: America’s New Landscape of Class and Conflict’ by Phil A Neel reviewed by Carl Kelleher 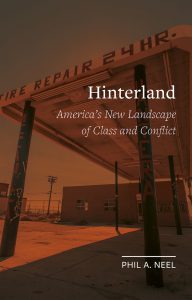 Carl Kelleher is a PhD Candidate in English at the University of Massachusetts, Amherst. …

Phil A. Neel’s Hinterland is a brilliant, powerful and remarkably ambitious work. Many things at once – first-person travelogue through rural poverty, communist geography, ecological warning, political theory, jeremiad against degenerate urban liberalism – it unsurprisingly yields uncompleted arguments; although delivered with utter conviction, the book’s implications remain open, productively yet frustratingly. Within the confines of this review I can only touch on a fraction of the issues it raises, so let me register in advance my gratitude and admiration for the book and its author, whose experiences and upbringing in poverty, scandalously unusual among academic radicals, I share and recognized in his utterly unsentimental prose.

Hinterland appeared not long after Trump’s election and its prose is saturated in the sense of fundamental crisis unleashed by that event, although Neel’s diagnosis of this crisis is far deeper than electoral politics, encompassing the entirety of our economic, social, moral and ecological conditions and portending imminent insurrection. Neel’s main purpose is to forecast where future revolutionary insurrections might occur, who will be their leading agents and by what means they will succeed. Neel approaches the first question by sorting capital’s current landscape into a three-part categorization of urban core, near-hinterland and far-hinterland, concisely conveyed as follows: ‘clear islands of affluence, encircled by a near hinterland composed of identifiable industrial-logistics expanses that gradually fade into a farther hinterland of agriculture, black markets, and (half-) abandoned fields, factories, and forests’ (120). However, their different material constitutions mean that each hinterland – the near and the far – ‘contains its own distinct political dynamics,’ the exploration of which forms Hinterland’s substance (17).

Neel begins in the far-hinterland, where anti-federal conservative communitarianism thrives because people ‘experience class exploitation as a largely a matter of rents, rather than wages,’ (37) so that ‘it is access to federal money [that] determines politics in the countryside’ (172). The story Neel offers is of decades of irreversibly failing extractive industries – mining, ranching, timber – shrinking tax revenue, defunding state services and creating public service gaps into which far-right groups such as the Patriot movement and the Oath Keepers can step. These groups, frequently including former soldiers and ex-cops, engage in what Neel refers to as ‘competitive control’ – borrowing a term from counterinsurgency theorist David Kilcullen – which essentially names the ability of insurgent groups to outcompete the state to provide security and order. The far-right hopes ‘local residents can be organized into self-reliant militias and local governments can be won over to their cause to create a rural base of power, parallel and opposed to that of the federal government’ (28). However, their spectacular armed showdowns with federal agents ultimately, in Neel’s view, only express the interests of the local mine owners, mill proprietors and cattle ranchers – who Neel calls ‘the Carhartt Dynasty’ – the petty capitalists most affected by federal land taxes and usage fees (36).

Neel’s chapters on the far-right are meant to distill lessons to leftists about power. He respects their ‘pragmatic focus on questions of power, which are religiously ignored by the American leftist, who instead focuses on building elaborate political programs and ornate utopias, as if politics were the exercise of one’s imagination,’ (53) which Neel distills into a slogan: ‘support follows strength, and ideology follows support’ (32). Yet he also observes that ‘a majority of the local populace … not only do not oppose federal land management, but in fact depend on it for their livelihood’ (40). Thus, while Neel positively contrasts to Occupy’s ‘unwieldy populism’ the Patriot Movement’s ‘focus on the functional abilities of an engaged minority … which can gain popular support via its ability to outcompete the state and other opponents in an environment of economic collapse,’ (52) he nonetheless concludes that ‘the Patriots were ultimately outdone by the state in the game of competitive control, since the state itself provided enough stability to the population via its own normative framework, against which the Patriots could offer no real alternative’ (40-41). But if the Patriot movement’s former and current soldiers and cops have found themselves stymied by the state even where the state is weakest, what pragmatic hope does this offer the decidedly less-disciplined cadre of non-warriors on the left who typically find themselves in cities, where, Neel is adamant, the state remains powerful?

In any event, it is the near-hinterland that ‘will likely be the central theater in the coming class war,’ because, first, ‘its relative industrial density,’ secondly its ‘capacity to fundamentally cripple global supply chains’ and third, ‘the fact that large populations of people who have been made surplus to the economy live and work along its integral corridors’ (146, 174). Near-hinterlands are ‘logistics nodes,’ where ‘containers, parcels, unpackaged commodities, and unfinished goods are sorted, processed, packaged, and transferred,’ that ‘expand laterally in corridors that follow major freight routes such as interstates, railroads, and rivers’ (98). These corridors are typically postwar suburbs, converted into ‘hyperdiverse proletarian neighborhoods’ of immigrants, declassed former urban dwellers, and racialized poor (103). The near hinterland thus mixes residential with logistics spaces, ‘such that day-to-day life in the near hinterland is shaped by the infrastructure of the global economy in a direct way not experienced in the central city’ (103). It is in these impoverished suburbs where ‘class doesn’t look like class’ that Neel finds today’s proletariat, now ‘unified only in its separation’ (126).

Neel’s final chapter considers the 2014 riots in Ferguson, Missouri as a model of future near-hinterland unrest. Just as with the far-hinterland, it is the state, not capital, that is the object of antagonism: what Neel calls ‘the new rents of the near hinterland’ produce polarizations between ‘those who collect the fines, and those who pay them’ (172). Ferguson epitomizes the near-hinterland’s ‘dwindling population, fleeing industry, and plummeting property values [which have created] a budgetary crisis, forcing many of the area’s small municipalities to rely less on their shrinking tax base and more on extra-tax fees and fines, enforced by the police,’ (132) so that, in the future, ‘we will see local solutions to the problem of austerity that take the form of extra-tax fees, fines, and simple expropriations of the worse-off populations within crisis-stricken cities’ (171).

In both hinterlands, Neel foresees future conflict being led by an ‘engaged minority,’ or ‘ultras,’ whose form of organization arises from swearing an oath to coordinates their destituent actions in the aforementioned ‘game[s] of ‘competitive control’ (154, 53). For these ultras, ‘there is often … no political strategy as such, only power and the tactics that build it,’ (154) specifically, how ultras ‘approach influxes of refugees and migrant workers, how they participate in (or against) local cycles of unrest, whom they ally themselves with in the midst of an insurrection’ (53). In sum, the oath is now ‘the present form of partisanship, its pragmatic focus on the functional abilities of an engaged minority capable of at least temporarily cutting across an otherwise-unbridgeable atomization’ of the proletariat (154).

Hinterland is openly and vociferously ultra-left, with obvious ties to Endnotes and fellow-travelers such as Joshua Clover, and most arguments about the book’s merits will likely begin and end there. Others will pause over Neel’s insufficient treatments of US racial politics and global unevenness, his tendency to treat all economic policy as perfectly functional, the over-optimistic tendency to see the recent electoral humiliations of US liberals as the definitive death of liberalism tout court, the tendency to convert preference into prediction and the persistent slide between description and advocacy, so that on one hand riots and blockades are opportunities the left should adopt, while on the other they are necessities to which the left must adapt. In a book dedicated to strategic power, the military is stunningly absent. There is also the curiosity, not unique to Neel, that ideology is said to explain nothing about anyone’s actions, except for reformists and liberals, whose actions are entirely explicable as ideological.

I have already noted that Neel’s analysis discloses how state austerity produces dependent, demoralized populations alongside motivated minorities or ultras. What bridges the gap between the ultras’ current failures and foreseen future success is, to grossly oversimply Neel’s view, capital’s long-term tendency to render labour superfluous, which he predicts will now and forevermore act unimpededly until profit rates fall to zero and below. But this introduces another puzzle: this long-term tendency generates three divergent spatial zones yet only one form of antagonism. All struggles converge on the riot, organized by the oath, occurring in logistics nodes, led by ultras, servicing surplus populations.

Thus, while Neel wants to remind readers of the great and growing differences between populations wrought by capital’s production of space, he inexplicably foresees great similarities in revolutionary activity across and despite those differences. Neel insists that the core, near-hinterland, and far-hinterland have different political dynamics, yet he also suggests that those dynamics will birth, quite independently of those population’s self-understandings and capacities for self-representation, one non-representational form of politics. Why wouldn’t intensifying spatial unevenness yield intensifying differences in political mediations, however unwelcomely, infuriatingly and discordantly? Assuming continued spatial unevenness, a broader anti-capitalist movement would do well to combine and coordinate forms such as riots and blockades, affinity groups and ultras, with revolutionary party-formations, assemblies, cells, strikes (for instance the wave of teachers’ strikes and the recent women’s strikes), spokescouncils, service programs and so on, articulations that would respect their differential geographical determinations. This risks ad-hocery and mutes the thrills of petty bickering, but if capital is the unity of our manifold separations, its overcoming must likewise remain manifold.