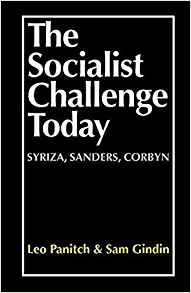 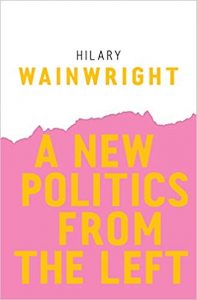 Hilary Wainwright
A New Politics from the Left

Leo Panitch and Sam Gindin’s The Socialist Challenge Today and Hilary Wainwright’s A New Politics from the Left are both short publications that seek to assess the limits and lessons for the radical left in Britain in 2018. Both respond to the historic election of Jeremy Corbyn to the leadership of the Labour Party in 2015, the party’s subsequent massification in terms of membership and its renewed social democratic – often branded ‘socialist’ – orientation under the anti-war backbench MP turned Labour leader.

The purpose of both short works appears to be to introduce a new generation of young activists, inspired by the emergence of Corbynism, to a range of historic lessons and experiences – both victories and defeats (overwhelmingly the latter). Wainwright hopes her work can function as a ‘resource’ for those within the movement around Corbyn, as that movement looks for ways to ‘maintain its energy, creativity and stubborn determination to create an open, participatory, green and feminist form of socialism (ix-x).’  This is done by sketching an array of examples and experiments in which leftists attempted to decentralise and democratise economic and political power at a local level – ‘from the bottom up’ or ‘from below’, as well as by introducing readers to a theoretical framework based around what she calls a ‘new politics of knowledge’. Wainwright’s ‘politics of knowledge’ refers to the relationship (or ‘bond’) between knowledge and authority. This bond, she suggests, has underpinned both the institutions of the post-war social democratic settlement in Britain – of ‘top down’ workplace management, bureaucratised planning, state-owned industries, and the andocentric family – as well as the central planning of the Soviet system in Eastern Europe (1-2). According to Wainwright, the events of 1968 threw such authority, ‘with its elite forms of knowledge’, into crisis (2). Ever since, movements have ‘shared and developed their own kinds of knowledge’ (2), ‘mutually and horizontally’ (8), ‘via practice and through debate and deliberations’, that in turn have produced new ideas, formed the basis for ‘new institutions’, and undermined existing authority (2). In doing this, groups have simultaneously challenged both the presumption that ‘the state knows best’ and the ‘expertise’ of corporate management (10). For Wainwright, social movements – or say, a group of self-organised workers – in organising themselves to ‘enable all members to share and reflect on their experiences, including emotions and feelings’, collectively generate ‘an autonomous source of transformative power’ located independently from both the market and the state (11). Wainwright contrasts this ‘new politics’ of transformative power to the traditional top-down ‘power as domination’ approach that has – she suggests – characterised both Fabian and Leninist traditions (74).

From this theoretical starting point, Wainwright goes on to discuss three examples of ‘pre-figurative alternatives’ (111). This includes the 1976 ‘Lucas Plan’, a proposal put forth by shop stewards at Lucas Aerospace which advocated the production of socially useful products in the face of job cuts. Whilst the plan itself was rejected out of hand by management and never implemented, Wainwright draws on this as an important example of workers collectively sharing knowledge to produce alternatives to common problems. Other examples include Newcastle Unison’s opposition to public sector privatisation in 1999, where union workers successfully secured a ‘democratic alternative’ to local council lay-offs, and the more recent digital commons initiatives in Catalonia, with attention shown to the co-operatively owned online market place, Fairmondo. However, in order for similar experiments in ‘transformative power’ to be rendered effective, one requires – and Wainwright admits this – a government at the central state level ‘sharing the same goals and willing to decentralise power at the same time as protecting civil initiatives from the destructive power of the private corporate-driven market’ (109). This problem isn’t answered by Wainwright, and its worth remembering that the rejection of the Lucas Plan took place under a Labour government, elected on a radical manifesto in 1974 that promised a ‘new spirit in industry’ and with Tony Benn as Secretary of State for Industry, which begs the question: if not then, when? Wainwright’s book lacks meaningful engagement with how any of this would be possible, with questions of state power and strategy (addressed by the other publication in question). It’s also a stretch to brand this as a ‘new politics from the left’, given that it effectively rehashes old ideas and anecdotes that either failed or rely upon specific, more favourable configurations of economic and political power that no longer exist, alongside a predictable opposition to ‘top-down’ politics that has stunted social movements for decades.

In contrast to this, Panitch and Gindin’s work, which takes a far more class-based approach, is concerned primarily with questions of party organisation and class formation, and prompts Corbyn’s supporters to face up to the harsh realities and constraints of taking state power under capitalism. Any socialist that comes to power looking to tamper with capitalist social relations will inevitably face immense hostility from capital – both at home and abroad, international organisations, foreign powers and elements of the state itself. Whilst the likes of Corbyn, Sanders, Iglesias and Tsipras have all pointed ‘beyond Third Way social democracy’, Panitch and Gindin suggest that ‘their capacity to actually move beyond it is another matter’ (14).  How can fledgling socialist governments withstand the pressures of state power without caving in to what the authors call ‘social democratisation’? (16) How did Syriza go from a radical left coalition seeking – in its own words from 2013 – ‘the creation and expression of the widest possible, militant and catalytic political movement of multidimensional subversion’ to a party of government implementing the exact IMF-imposed austerity measures it had been elected to oppose? (49)

The biggest impediment to these movements transcending neoliberal capitalism – or capitalism entirely – they argue, is ‘not preparing adequately for the challenge of actually transforming state apparatuses’ (14). The authors perceive this as primarily an organisational challenge for the left. For them, the ‘exhaustion’ of both social democratic and communist parties as ‘agents of social transformation’ (29) has generated a crisis of working class organisation and representation (26). The ability of the radical left to develop new forms of popular, working class politics in the twenty first century is not merely a question of ‘better policies or better tactics’, but rather ‘primarily an organizational challenge to facilitate new processes of class formation rooted in the multiple dimensions of workers’ lives that encompass so many identities and communities’ (26-7). Panitch and Gindin argue that the post-2008 social movements, such as the Occupy movement, ‘quickly revealed the limits of forever standing outside the state’ (12). It is in a context of powerlessness and futility that the radical left has turned ‘from protest to politics’, a shift characterised by a much-needed (and long neglected) emphasis on class, wealth inequality and political power (11, 13).

The book’s second chapter ‘Signposts towards democratic socialism’, whilst only 11 pages long, is the publication’s most insightful and interesting section, taking the reader through an array of experiences and insights from the democratic socialist left’s political and intellectual canon. Like Wainwright, it identifies attempts by the European left in the 1970s to establish radical alternatives to both the bureaucratic state-owned enterprises of social democracy and the authoritarian, centralised practices of ‘Actually Existing Socialism’ in Eastern European. For Panitch and Gindin, this emerges most notably in the form of intra-party struggles within existing social democratic parties – between the party’s established old guard and young, socialist militants who spoke of class, exploitation, crisis and imperialism (29). The ‘most promising and most protracted’ (33) of these struggles, Panitch and Gindin suggest, being the struggle within the British Labour Party and the Campaign for Labour Party Democracy. Whilst the Bennite insurgency was snuffed out in the early 1980s ‘by a coalition of old left parliamentarians and union leaders’ (33), the experience of defeat had a lasting impact. Jon Lansman, founder of the grassroots Momentum organisation set up in 2015 to defend Corbyn’s leadership in the party, had been co-ordinator for Benn’s deputy leadership campaign in 1981, of which a younger Corbyn was a part, with the former describing the latter as very much a ‘protégé’ of Benn. But perhaps more importantly, the authors see these intra-party struggles throughout the 1970s and 1980s as having generated a broader discussion within the European left on the questions of state power and strategies that pointed beyond both Leninist and social democratic models and emphasised the need for radicals to ‘democratise’ both state structures and party forms. The next few pages are some of the book’s best, peppered with theoretical insights into state theory and strategy from the likes of Poulantzas, Miliband, Gorz and Luxemburg, they throw up age-old problems for socialists operating within the Labour Party today. Whilst this section generates more questions than it answers, the authors are right to draw attention to the lack of serious thought put to state power and strategy: particularly by those engaged with Corbynism.

Following this, the reader is taken through Bernie Sanders’ 2016 presidential campaign and the experience of Syriza in Greece. Engagement with Sanders feels rushed, and whilst the authors point to interesting lessons of his presidential bid – this could have ultimately been omitted in favour of deeper engagement with the left’s recent experience in government in Greece. In explaining Syriza’s ‘capitulation’ to the Troika, the authors emphasise the organisational inadequacy of the Syriza coalition, chiefly, the lack of ‘close contact’ between the party and the social movements, and for seeming ‘incapable of appreciating the need for activating party cadre’ (58). However, the concrete practicalities of this well-trodden platitude (a left government needs a social movement behind it to succeed) are unfortunately not elaborated upon in any meaningful depth. The book’s key argument is that a radical left government must ‘keep its feet in the movements’, a necessity if it is to ‘counter the pull from inside the state towards social democratisation’ (92) or – one could say – Syrizification. Combined with this is the crucial need to fundamentally transform the ‘institutional modalities’ of the state, presently structured to reproduce capitalist social relations’ (93), with public employees becoming ‘explicit agents of transformation’ (93-4) – something which would require the big unions to go beyond their current ‘defensive particularism’ (94). Whilst approached in different ways, both sets of authors are essentially making the case for – in Wainwright’s own words – the ‘radicalisation of the relations between electoral politics and extra-parliamentary alternatives’ (113). Those with an interest in this theme will enjoy both publications.