Marx & Philosophy Review of BooksReviews‘Like a Thief in Broad Daylight: Power in the Era of Post-Humanity’ by Slavoj Žižek reviewed by Stefan Pedersen 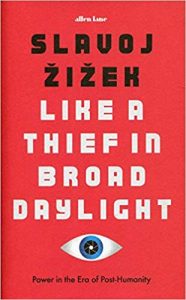 Slavoj Žižek
Like a Thief in Broad Daylight: Power in the Era of Post-Humanity

Stefan Pedersen is currently a Visiting Research Fellow at The University of Leeds, where he …

Slavoj Žižek is now a true public intellectual and anything he writes is going to get published no matter how lightly worked through it is. Like a Thief in Broad Daylight bears some of the hallmarks of a work that has been hastily put together for mass market consumption. For instance, Žižek blatantly disavows academic convention by cutting and pasting film synopsis after film synopsis from Wikipedia. In addition, there is a chapter on MeToo that might have fit better as a standalone piece. But once one sees past the blemishes, this work offers a wealth of subversive insights. It is these, which both forms a red thread throughout the work in terms of narration and the political changes subtly argued for, that make the work worth reading.

The argument the book presents is primarily a corrective to the notion that identity politics is incompatible with universalism. Žižek is concerned with the need to balance the overt focus on particularity, so prominent in both contemporary radical and academic discourse, with an appreciation for the universalist aspects of contemporary existence. To sum up Žižek’s much more elaborate argument, the relationship between the two is perhaps better described as a configuration of ‘yin and yang’ than one of ‘either-or’. The work itself is composed of four loosely interconnected chapters or essays of about equal length, in addition to a shorter introduction, as well as a conclusion which is almost a full-length essay on its own.

The first chapter ‘The State of Things’ is concerned with the universal aspect of global capitalism, or what for the sake of brevity can be construed as ‘the enemy’ which, as all followers of Sun Tzu will be aware, ought to be known before it can be successfully defeated. There are two ways to battle this enemy. The first is a Sisyphean task that Žižek thinks is ultimately futile, namely to ‘continue to play the humanitarian game of taking care of those left behind’ (22) i.e. the many losers in a capitalist world economy. The second is to fully commit to a fundamental reordering and ‘tackle the much more difficult task of changing the global system that generates them’ (22). Those in the know will be aware that Žižek has long ago committed to the radical solution, which has the upside of being a lot more thorough. There is also another universal aspect to contemporary existence which Žižek sees fit to point out here: ‘Phenomena like global warming make us aware that, with all the universality of our theoretical and practical activity, we are at a certain basic level just another species living on the planet Earth’ (33). In short, Žižek is pointing out that our existence is enveloped by these two systemic realities, capitalism on the one side, planetary habitation on the other. These are both omnipresent from the vantage point of human beings, or ‘universally’ there. They are both, as it turns out, malleable. If one of these universals must be sacrificed to save the other, capitalism must go, and thanks to the onset of the Anthropocene, that is no longer a hypothetical scenario (34-5).

The second chapter, ‘Vagaries of Power’, unsurprisingly for those familiar with Žižek’s previous work, uses a parable about Lenin and the October Revolution to explain that ‘what Lenin really learned from Hegel’ was to appreciate ‘the concept of concrete universality and its use in politics’ (65). This is apparently a lesson currently lost on zealous defenders of identity politics. ‘Concrete universality’ is by Žižek presented as the sensible position between the extremes of nominalism – the view that universals do not exist – on the one side and a fully abstract universality on the other. The ‘concrete’ part of it means understanding that no two situations are exactly alike, since ‘there are no “typical situations” all we are dealing with is exceptions’ (65). The universality lies in ‘the totality that regulates the concrete context of exceptions’ (65). Further, an appreciation of ‘concrete universality’ does not mean that particular identities must be abandoned in favour of universal ones but realizing that all particular identities are necessarily subsumed to their universal opposite ‘as the “work of the negative” that undermines every such identity’ (65). The ‘work of the negative’ is a Hegelian term – also employed by Freud and Lacan, so this is a concept Žižek is highly familiar with. But the crucial message is here that, even though personal particularity is not to be underappreciated, we must also realize that we are all still subject to certain universal forces – with ‘the universal capitalist system’ at the fore (65).

The third chapter, ‘From Identity to Universality’, sees Žižek engage with the rise of populism. Populism, he argues, is one of the symptoms of ‘the big social disease of our time: Huntington’s’ (115). This social disease afflicting contemporary world politics, Žižek cleverly names after Samuel Huntington’s ever popular ‘clash of civilizations’ thesis. This thesis, as Žižek observes, is now being used to legitimize the only alternative to conflict between civilizations which its internal logic will allow for, namely ‘the peaceful coexistence of civilizations’ (116). ‘Civilizations’ here broadly overlaps with nations and especially the greatest powers among these, thereby making nationalism the ideological expression of this worldview. This affliction, to the relief of strongmen like Putin and Xi, spells the end of liberal internationalism and the human rights regime. According to Žižek, this ‘New World Order that is emerging’ still allows for ‘the smooth functioning of global capitalism’ because ‘there is no contradiction between market globalization and the accent on one’s own particular “way of life” in the cultural sphere’ that it emphasizes (116-17). Against the prevailing nationalist winds, the EU stands alone in offering ‘the only model of transnational organization with the authority to limit national sovereignty and the task of guaranteeing a minimum of ecological and social-welfare standards’ (117). Which is ‘why the idea of European union is worth fighting for, in spite of the misery of its actual existence’ (117).

Žižek further argues that the collective focus on culture distorts the ‘cognitive mapping’ of ‘those exploited and marginalized’ who, instead of engaging ‘in a universal emancipatory struggle’, end up living in fear of each other, with ‘local lower classes’ on one side and ‘immigrants’ on the other (125). When culture is employed to distract the populace from seeing their economic interests being undermined, Žižek sensibly argues that to embrace nationalism is not the solution.  It is a ‘fatal limitation’ to counter ‘the rise of Rightist populism with Leftist populism’ (126). It is as if Žižek is aiming to say that ‘socialism in one country’ is a flawed strategy for beating back the rising tide of right-wing populism since that is a genuine global problem in need of a universalist solution. Žižek could here have added that backing populist causes such as ‘Brexit’ from a left-wing perspective only serves to validify and reinforce the nationalist ideology at the heart of the global right-populist counter-revolution. But, in a move disappointing this reviewer, the attention is now turned to MeToo.

The fourth chapter, ‘Ernst Lubitsch, Sex and Indirectness’ sees Žižek go off on what is in many ways an unnecessary tangent about MeToo. It is true that Žižek does in this chapter strike a welcome and overall eminently sensible contrast to right-wing commentators that have engaged with this aspect of identity politics earlier, such as Jordan Peterson. For example, Žižek, in line with feminists in general, argues that the despicable acts of Harvey Weinstein and other powerful men ‘were not cases of private pathology, they were expressions of the predominant masculine ideology and power structures’ and that it is ‘the latter that should be changed’ in an effort to put an end to this kind of abusive violence (152). But it gets more interesting at the end of this chapter, which characteristically includes a treatment of both the films La La Land and Black Panther, when Žižek informs the reader that the latter film had forgotten ‘a precious lesson of Malcom X’ (182). Namely, that ‘to attain true universality, a hero must go through the experience of losing his/her roots’ (182). Then he goes on to mention Leo Strauss, who is strongly associated with reading political theory with hidden, or esoteric, messages in mind. Could Žižek be hinting that the path to a better world starts with abandoning our most rooted (religious/national) identities?

Žižek continues pressing a similar point in the conclusion ‘For How Long Can We Act Globally and Think Locally?’. Here, he observes that ‘only in a specific situation – a change in ideological sensitivity – does the realization that our ideological edifice is dissonant lead to its disintegration’ (207). He continues with pointing out that ‘for example, although slavery was obviously incompatible with Christian morality, it took a long time before it became intolerable for the majority’ (207). Žižek here, it might be surmised, encourages the reader to draw the conclusion that a global morality is incompatible with subscribing to the same nationalist identity that is at the root of right-populism. If that is the case, then this is a crucial lesson that those who aspire to follow in the footsteps of Corbyn, Sanders and Varoufakis should take to heart – but then my interpretation could also be wrong. I suggest, with Žižek, that it is best if you make your own conclusions (203). Despite the shortcomings mentioned, this is essential reading for those interested in our common future on planet Earth.