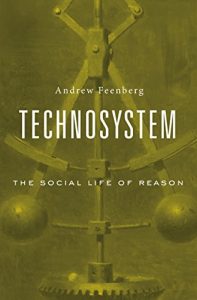 Ludovic Bonduel is a PhD researcher in political theory at the LUISS Guido Carli University of Rome. …

Andrew Feenberg is widely recognised as one of the major critical theorists of technology in the world today. His philosophical research on technology started in the mid-70s and developed in works that kept an evident consistency as they followed a common thread: rejecting both techno-determinism and naïve instrumentalism to understand technology as an essential scene of social struggles. Over the years he has produced one of the most convincing proposals to revise the Frankfurt School tradition of technology critique in the light of the empirical findings of Science and Technology Studies (STS). Feenberg’s latest book, Technosystem, remains in the continuity of these earlier works and as such might appear slightly redundant to already initiated readers. It is nonetheless an outstanding work of philosophy of technology in which classical authors of the field (Marx, Foucault, Lukács, Marcuse, Heidegger, Simondon, Latour and others) are brilliantly given commentary, re-interpreted, and integrated to Feenberg’s own approach: ‘critical constructivism’. Feenberg’s philosophy of technology is furthered along certain lines and its relation to markets and administrations is specified by the notion of technosystem – defined as ‘the field of technically rational disciplines and operations associated with markets, administrations, and technologies’ (x).

Most of the seven chapters composing this book, as well as the introduction, had already been published as articles, but their compilation produces a surprisingly coherent whole. The book is structured in three parts: method, application and theory. The first part introduces a method of analysis of the rational institutions composing the technosystem; the second part applies this method to analyse struggles over the internet; and the third examines the concept of rationality itself.

The modern notion of rationality is based on the model of mathematics and experimental sciences. Modern rational institutions are composed of both causal and symbolic relations and thus, cannot reach the rigor of these disciplines. Nevertheless, they are based on rational procedures and principles that seem to mirror these disciplines and to reify social interactions, to subject them to causal laws resembling the ones that govern natural phenomena. Feenberg identifies three general rational principles structuring the institutions of modern societies. Markets are based on the principle of equivalent exchange which also underlies mathematical reasoning. Administrations resemble science as they classify cases and treat them under universal rules. And technologies are based on the adjustment of means to ends, or in other words, on the principle of efficiency. The Enlightenment critique is largely inappropriate to address such rational institutions and systems: it denounced substantive bias such as prejudices, emotions and pseudo-facts and called for the advent of reason. Instead, modern forms of domination are based on formal bias, that is, discriminatory principles which are objectified in rational institutions and artefacts and can only be revealed by a socio-historical analysis. Feenberg sees in Marx’s theory of surplus-value one of the earliest critiques of such formal bias. While Proudhon considered property to be theft and unions demanded “fair” wages, Marx agreed with bourgeois economists who claimed that every commodity is sold at its value, including labour. But the price of labour power – consisting in the amount of labour required to produce the goods necessary to the worker’s subsistence – is not related to the amount of value a worker can produce in a given time, and the difference constitutes surplus value. The rational functioning of the capitalist market thus enforces social domination and exploitation.

Feenberg insists on the constructivist idea that technology is underdetermined by technical criteria. This means that there are usually a variety of functional solutions to any given problem, among which social actors eventually choose; and that the interpretation of the problem itself may vary between actors and across time. In the early days of the bicycle, for example, as described by Pinch and Bijker (1984), two designs were competing: one faster but unstable bicycle with a higher front-wheel, and a slower but safer one with two equal-sized wheels. The promoters of the faster design interpreted the object as a sport’s device, while the promoters of the safer design saw in it a means of transportation. The safer design was eventually chosen and benefitted from all following improvements. Retrospectively, the sports bike looks like a lower stage in the same technological development, but this is an illusion: it represents an alternative path of development. Worldviews and interests are materialised in technologies and constitute their formal bias. Technological controversies result into a stable design code which translate social choices in technical terms. The worldviews and interests expressed in common language by social actors are translated into technical language to form design codes which will shape artefacts and technical disciplines. Therefore, the opposition of facts and values is often misleading: ‘values are the facts of the future’ (8) since they constantly shape the material world. This opposition even legitimates a technocratic order in which only experts have a say on technological choices. Feenberg argues – albeit in vague terms – that it is not only the design of technologies which is underdetermined and subject to struggles, but also the one of administrations and markets. In the case of administrations, design regards the forms of organizational structure and operating rules; while in the case of markets, it regards forms of marketing, regulations, subsidies, patents, etc.

In his analysis of the internet, Feenberg applies his method to reject both the over-optimistic discourses which were dominant in the early days of the medium and the dystopian views that are now taking over academic debate. His main point is that most scholars mistakenly assume that the technology of the internet is complete and has a single dominant impact. Instead, Feenberg argues that the technical evolution of the internet is still in flux and that it is pulled in diverging directions by different social actors. On the one hand, business interests want to transform the internet into an entertainment medium, while on the other, most internet users want to push forward its democratic potential. The current hybrid architecture of the internet enables the cohabitation of these contradictory logics. However, if business pressures to suppress network neutrality succeed, the internet might be transformed into a sort of personalized television.

While Frankfurt School philosophers proposed a general critique of instrumental rationality, Feenberg focuses on the concrete bias of rational institutions and technologies. He also develops a more general theory of instrumental rationality, which shows that rationality itself is underdetermined and thus that there is a plurality of paths for rationalisations. Every causal dimension of instrumental practice has a cultural counterpart: when an object is abstracted from its natural context, stripped of its useless qualities to be enrolled in a technical network, it is simultaneously interpreted in its new meaning and integrated to a new cultural system. The insistence on rationality and its reconceptualization also enables Feenberg to avoid the epistemic relativism that characterizes some postmodern philosophers and constructivist sociologists. He believes reducing rationality to a nonrational origin such as western or patriarchal ideology is to confuse substantive and formal bias, and thus, to misunderstand modernity and disarm the critique of the forms of domination to which it gave birth.

Individuals in modern societies are enrolled in technical networks that constitute them in social groups: truck drivers, nurses in hospitals, consumers of a specific medicine, victims of specific pollutions, etc. These groups usually have collective interests that can become politically salient when their members become conscious of them. In such cases, their interventions might succeed to re-design some aspects of the technosystem. According to Feenberg, the labour movement was the first form of struggle over the technosystem. It called for health and safety regulations in factories and, more generally, for democratic ownership and control over the industrial system. However, Feenberg’s politics of the technosystem is not revolutionary and does not aim for a grand resolution of social conflicts, but for a variety of specific struggles bringing limited progresses that may add-up overtime.

If these specific struggles are far from negligible, Feenberg’s approach takes the risk to dissolve in them the central conflict between labour and capital, and to lose sight of what should give them their direction and meaning: the socialist ambition to democratize the economic sphere. Not only the democratic interventions within the technosystem proposed by Feenberg are limited and dispersed, but he excludes the possibility of limiting the size of the technosystem. This is surprising since he acknowledges the functional logic of markets, administrations and technologies is in itself problematic (160), no matter how well they may be designed. Nor does he raise the issue of unlimited capital accumulation and economic growth, though they clearly constitute the engine of technosystem expansion and are increasingly criticized in academic and public debate.