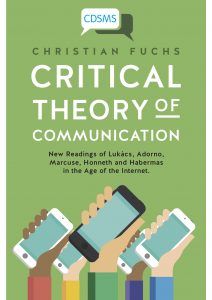 Christian Fuchs
Critical Theory of Communication: New Readings of Lukács, Adorno, Marcuse, Honneth and Habermas in the Age of the Internet 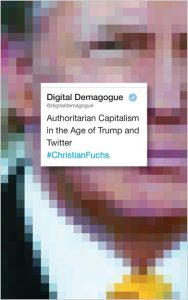 Christian Fuchs
Digital Demagogue: Authoritarian Capitalism in the Age of Trump and Twitter

Mario Khreiche holds a PhD in Political and Cultural Thought from Virginia Tech, where he teaches …

Critical Theory of Communication and Digital Demagogue are among Christian Fuchs’ latest attempts at establishing Marxist-inspired critical theory as a methodological tool to understand the worldwide emergence of authoritarian governments in the age of the Internet and social media. Fuchs challenges his readers to grasp media technologies and surges of right-wing authoritarianism through lenses of political economy, class struggle, commodity fetishism, and alienation, without falling into orthodox essentialisms of base and superstructure and Marxist productivism. While both books necessarily overlap in revisiting and applying critical theory cornerstones, each offers original conceptual moves in the studies of contemporary media and communication and authoritarian capitalism. Shortcomings in presentation and style therefore hardly weaken Fuchs’ overall ambition of devising a dialectic of economy and culture that makes sense of a world in which visions of technology-induced utopias proliferate alongside the dystopian specters of political and climatological catastrophe.

Critical Theory of Communication explores Lukács’ Ontology of Social Being (Chapter 2), Adorno’s critical theory of knowledge (Chapter 3), Marcuse’s philosophy of technology (Chapter 4), Honneth’s interpretation of reification and alienation (Chapter 5), and Habermas’ critical theory of communication (Chapter 6). The introduction, which offers a concise overview of the main concepts in critical theory from Marxist ideology critique to Habermasian communication theory, formulates a secondary goal: Fuchs wants to draw attention to lesser-known texts of the Frankfurt School and to expand the discussion to include adjacent theories. This objective, however, only succeeds in the case of expanding a Lukács reception traditionally limited to History and Class Consciousness to include the Ontology of Social Being. Subsequent analyses of ostensibly overlooked moments, such as in the works of Adorno or Marcuse, are less effectual in that regard. Correcting Adorno’s views on Jazz from “elitist” to “problematic,” for instance, seems like an odd hill to die on. Conversely, the engagements with a wider critical theory canon often remain shallow, as in the case with fourth generation Frankfurt scholars Hartmut Rosa and Rahel Jaeggi (155-157), or in the case of Jean Baudrillard, who serves as a straw man to knock down “cultural reductionism” (181-185). Despite these minor criticisms, Critical Theory of Communication unambiguously authenticates the Frankfurt School as a viable genre of scholarship towards a critical study in the digital age.

To critique euphemistic notions on digital work and the pervasive social media ideologies of collaborating and sharing, Fuchs derives from Lukács’ Ontology a dialectics of economy and culture. The analysis brings into view not only informational, that is, content-related aspects of cultural work, but also the creation of “information technologies through extractive and industrial work processes” (59). Fuchs underscores Lukács’ concept of the teleological, positing “the conscious and active production of changes by realising subjective intentions in the objective world,” (69) to critique the neat divisions between the domains of ideas and work and culture and economy. Accordingly, the fetishism of smooth devices conceals the slave labour involved in mineral extraction for digital technologies not unlike how Silicon Valley’s persistent freelance myth belies the exploited labour on online micro-labour markets, such as Amazon Mechanical Turk (AMT) (216-217). Here, Fuchs’ criticism could easily extend to the ideological production in the so-called sharing economy, which masquerades the class struggle of turning personal resources into assets as a “disruptive” form of economic exchange.

Lukács’ influence continues in the chapter on Adorno’s contribution to a critical theory of knowledge. Despite the widely-held belief of Adorno as a “media pessimist” (75) and an “elitist” (77), Fuchs clarifies that “Adorno profoundly opposed the commodity form” (79). Against Lukács, for whom art must adhere to the function of socialist realism, Fuchs’ Adorno considers functionless art as “the symbol of freedom beyond capitalism and class” (87). Importantly, Fuchs stresses Adorno’s anti-positivist reading of Hegel as a crucial component in formulating critique in a modern, class-based society. In this view, Hegel’s dialectical language is particularly useful to deconstruct ideological knowledge among a dominated group such as a racist segment of the traditional working class (106), a theme that resurfaces in Digital Demagogue.

Fuchs turns to Marcuse’s insights on the relationship between technology and society, which remain current for a critical theory of social media. Fuchs’ Marcuse interpretation emphasises the significance of “technics” as “the universal form of material production [that] projects a historical totality” (115). Transcending a capitalist system would therefore not automatically yield an emancipatory technology, because technology in industrial societies is invariably a technology of domination. Rather, the sublation of modern technology requires its simultaneous “eliminat[ion], preservat[ion], and lift[ing] to a new qualitative level of existence” (Ibid.). As prospects for such a new technology, Fuchs highlights “commons-based social media” that could be designed to be “privacy-enhancing, advertising-free, [and] not-for-profit” (116). Whether Marcuse’s profoundly contradictory notion of a new technology would actually manifest in such democratic applications is debatable. Fuchs’ optimism, however, is not to be confused with the media determinism of various post-capitalist commentators who argue that more ‘open source’ in the global flows of information capitalism would somehow produce a new order. Instead, a dialectics of freedom rests on “[c]onscious human activity within existing conditions” (119). Similarly, a dialectics of capitalism’s objective contradictions shows that the immense investments into social media corporations conceal information capitalism’s fundamental uncertainty and its propensity for financial crisis, which in turn yields opportunities to move towards a new Internet (123, 212). The highly speculative nature of financialisation manifest in Wall Street’s liquidation culture is paralleled by Internet companies perpetuating the ideology of play labour, where “objectively alienated labor is presented as creativity, freedom and autonomy that is fun for workers” (127).

Expanding on the concept of alienation, Fuchs offers a reception of Honneth’s theory of recognition, which in the last analysis “does not adequately account for the production of social life and the role of economic processes in it” (160). Defending Honneth’s insistence on essence and alienation against fourth generation Frankfurt scholars Rahel Jaeggi and Hartmut Rosa (155-7), Fuchs extends Honneth’s framework to include socially productive and reproductive elements. The resulting discussion on the modes of alienation on social networking sites differentiates between subjective, intersubjective, and objective alienation (171). In the age of Facebook, phenomenological forms of alienation are inseparable from the “surveillance industrial complex” and its commodification of data (173.)

In the final chapter, Fuchs goes “with Habermas beyond Habermas” (178) to contribute to a dialectical understanding of the relationship between labour and communication. Critiquing approaches of Alfred Sohn-Rethel (economic reductionism) and Jean Baudrillard (cultural reductionism) and Habermas himself (dualism of teleological and communicative action), Fuchs formulates a dialectics of cultural materialism using the work of Raymond Williams. Given the stated goal of expanding the critical theory canon, the engagements with Lev Vygotsky, Valentin Voloshinov, Ferruccio Rossi-Landi, and Raymond Williams in this regard feel rather rushed. Indeed, the superficial references to these theorists hardly adds more substance to a dialectics of communication and labor than the previous insights on Lukács, Adorno, and Marcuse as well as Fuchs’ own empirical observations on media economies.

Since the introduction of Digital Demagogue provides but a cursory overview of critical theory’s contributions to the study of authoritarianism, Critical Theory of Communication, in many ways, could serve as a more comprehensive foundation. Fuchs’ discussion of cultural work and his interpretation of the dialectic as existing between “identity and non-identity” nicely carry over into Digital Demagogue. To make sense of the recent rise of authoritarian leadership around the world, from Duterte in the Philippines to Trump in America, Fuchs again activates a broadly construed canon of the Frankfurt School. Digital Demagogue revisits the dialectical relationship between the state and the economy, a configuration always dependent on historical context.

Fuchs explicitly rejects reductive comparisons of contemporary authoritarian capitalism with Nazi terror. Instead, Fuchs illustrates convincingly the tenets of antisemitism that continue to proliferate today, namely the vilification of socialist and communist ideas, the monopolization of problematic representations of the working class, and the dissemination of worldwide, anti-elitist conspiracies. Based on the insights of Franz Neumann and Moishe Postone, Fuchs explains that “[t]he Nazis opposed a productive industrial Aryan capitalism with a parasitic, unproductive financial Jewish capitalism” (64) and that “[m]odern anti-Semitism is a one-sided ‘critique’ of capitalism that sees the sphere of circulation as the totality of capitalism” (66). In particular, Neumann’s work emerges throughout the entire book as a valuable resource in understanding the implications of mass and individual psychology, antisemitic conspiracies, tendencies towards monopoly capitalism, and, importantly, the roles of education and political activity to identify, critique, and abolish these formations.

The remainder of the book deals with Trumpism (Chapter 4), Trumpology (Chapter 5), and Trump and Twitter (Chapter 6). The analysis of Trumpism contrasts Trump’s anti-elite rhetoric against the background of his considerable business empire (95-96) and his definitive moves of supplanting government institutions with former industry leaders and lobbyists. Though Fuchs cites John Bellamy Foster and Robert McChesney’s work on monopoly finance capitalism, he misses the opportunity to point out their historical account of revolving door practices, especially in the defense and surveillance industry. Yet, Fuchs may be right to suspect that the “corporate interlocking” of Trump is of a different order (94-115).

Though Fuchs dedicates several pages to the question, “Is Trump a Fascist?” a more meaningful inquiry must incorporate other parameters: “The decisive question is whether his policies advance the interests of US monopoly capital, limit civil liberties, limit or repress democratic opposition, advance racism, nationalist division and violence against minorities, militarise the country and engage in imperialist war” (121).

Trump’s unpredictability is firmly situated in a media ecology that celebrates his brand either explicitly in the case of surging outlets such as Breitbart or implicitly in the form of mainstream media like CNN or MSNBC. Indeed, the 24-hours news cycle is part and parcel of “Trumpology,” confirming that ideology relies on hegemony: “Contention and symbiosis are two poles of the Trump spectacle’s dialectic that drives profitability” (171). Fuchs’ analysis centers media environments, but avoids the lure of media formalism, in that it explores Trump’s reality television show and his tweets through critical discourse analysis. Here, Fuchs could have spent more time on historicising fake news and reflecting on the efficacy of fact-checking, rather than generously granting space to lengthy Trump quotations (226-240).

Criticisms of Critical Theory of Communication and Digital Demagogue might lament the lack of clear positioning on the part of the author. Such criticisms, however, miss Fuchs’ main goal to present critical theory as an open field, rather than contributing to the endless turf wars that continue to divide left intellectual circles. Critical theory, rather than serving academic posturing, is a method to be employed as a means to end domination. If Fuchs’ engagements in both texts often remain cursory and fragmented, precisely these elements could unlock new perspectives in theory and empower students, scholars, and activists.