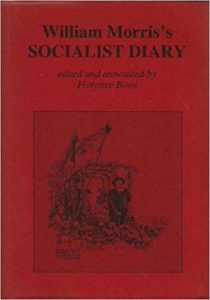 Originally published in 1981, this is a revised version of Florence S. Boos’s edited presentation of a diary William Morris kept in 1887 which largely focuses on his political activities over the course of a few months. Boos originally came across the fifty one page notebook in 1973 whilst examining several unpublished examples of Morris’s writings in the British Library Manuscript Room. For all its brevity, the document provides an intriguingly unadorned snapshot of Morris’s thoughts and day to day schedule during a period when he combined leadership of the Socialist League (SL) and editorship of its newspaper, Commonweal, with a busy public speaking schedule—as well as running Morris & Co, his decorative arts and furniture firm. To give the diary some helpful context, Boos reprints her introduction from the first edition along with an insightful accompanying essay about her evaluation of the document on returning to it for this latest version. In addition, the editor provides copious footnotes to the diary on almost every page as well as an extended final section of biographical notes on the people Morris mentions along with other notable members of the late nineteenth century sphere of British Socialism.

Starting in January 1887, perhaps the most regular entries in the diary are Morris’s descriptions of his travels around the country banging the socialist drum in front of a range of audiences with varying degrees of success. To put Morris’s efforts in this vein into some perspective, the modern-day editor of his political writings has estimated that between 1883 and 1890 he addressed over 1,000 meetings and was heard by as many as 250,000 people. Not that such figures should suggest that Morris regularly spoke in front of packed audiences whom he invariably roused with his socialist zeal. The diary records a good few meetings where the applause was ‘hollow’, the rooms were half-empty and, in several instances, the gathering seemed to have difficulty comprehending what Morris was explaining to them or, as he put it, ‘my Socialism was gravely listened to by the audience but taken with no enthusiasm; and in fact however simply one puts the case for Socialism one always puzzles an audience’ (67). In other entries, Morris was not beyond venting his scholarly frustration at ‘the depths of ignorance and consequent incapacity of following an argument which possesses the uneducated averagely stupid person’ (89). However, for all that he betrayed occasional signs of patrician exasperation with those to whom he lectured, this did not deter him from unequivocally pitching into the political fray to defend his convictions alongside associates who were from the same economic stratum as his sometimes nonplussed audiences—a case in point the role he played in the clashes between police and demonstrators at the 13 November 1887 meeting which took place in Trafalgar Square, otherwise known as Bloody Sunday

Alongside his accounts of his public speaking experiences, the diary is scattered with references to Morris regularly turning up for SL council meetings or to attend its Ways and Means Committee where the minutiae of keeping the organisation a going concern whilst debating the finer points of practical and ideological protocols were thrashed out amongst those present. That Morris, by his own admission ‘a well-to-do man, not suffering from the disabilities which oppress a working man at every step’, didn’t walk away from what must have been at times a frustrating slog through a thicket of opinions, counter-opinions, nugatory quarrelling and artful manoeuvring is indicative of his dedication to the cause (16).

What led Morris to keep a diary and what were the preoccupations which framed his impressions of the burgeoning British socialist movement in which he played such a notable role? Boos, in her introductory essays does an admirable job of positioning Morris and his activities within the orbit of late nineteenth century left-wing politics. The constant traffic of factionalism which surrounded any activist who sought to enter into the melee of Victorian socialism is well summarised as is Morris’s own emergence from under the autocratic shadow of H.M. Hyndman’s Social Democratic Federation to lead his own fully fledged revolutionary organisation in the form of the SL. In the diary, Morris’s innate ant-parliamentarianism is much in evidence, it being a defining factor in his whole political outlook in that electoral politics represented, for him, a palliative form of compromise with capitalism’s (or as Morris termed it ‘commercialism’s) evils. As for those who disagreed with Morris’s views in this respect, several entries show him summoning up a host of emotions for such dissenters which ranged from curmudgeonly dismissiveness to, in the case of the aforementioned Hyndman, outright contempt. A voracious appetite for political reportage seems to have fuelled his restively iconoclastic spirit and certainly a voracious appetite for political reportage is evident throughout the pages of his diary. He appears to have been an inveterate scrutiniser of the daily papers and seems to have relished observing and holding forth on the careerist machinations he detected behind parliamentary factionalism. In tension with this fascination with the hurly-burly of Westminster state-craft, a sense of Morris retaining a core of alienated idealism punctuates his more world-weary entries, a disposition strikingly captured by Boos in a quote from one of Morris’s letters which predates the diary by three years. In this Morris asserts that:

A society which is founded on the system of compelling all well-to-do people to live on making the greatest possible profit out of the labour of others, must be wrong. For it means the perpetuation of the division of society into civilised and uncivilised classes: I am far from being an anarchist but even anarchy is better than this… (19)

Faced with having to convince his audiences of the inherent iniquity of the society capitalism/commercialism and its progenitors had bequeathed them, Morris seems to have steeled himself by practicing what he termed ‘pessimism of the intellect, optimism of the will’, a rubric which seems to have fortified him during his many excursions into the arena of public discourse to extol the benefits of utopian socialism (37).

In contrast to recording the earnest exposition of his deeply held socialist convictions, the diary also offers some light relief by offering glimpses of the ‘other’ William Morris, Pre-Raphaelite and cultural connoisseur whose involvement with the South Kensington (now Victoria and Albert) Museum got his firm the commission to design its Green Dining Room and whose role as the museum’s chief advisor for the purchase of tapestries led to the acquisition of the fifteenth century Flemish ‘Tapestry of the Siege of Troy; a fact which, as he notes, made him chuckle ‘to think that properly speaking it was bought for me, since scarcely anybody will care a damn for it’ (58). On a similarly amusing note, even in the midst of public speaking engagements it is amusing to find Morris telling of his encounter at a meeting in Edinburgh with one, Job Bone, a notorious heckler and ‘pillar of capitalism’, who was commonly known as ‘the Bone of Contention’ and who seemed to Morris ‘a wooden creature, if not quite stupid’ (90).

William Morris’s Socialist Diary is, then, a noteworthy addition to its subject’s biographical archive. That it was not published at the time of its composition is due, according to Boos, to a couple of main factors. Morris, as remarked above, was extremely busy with his political and editorial duties before, during and after the period he worked on it so that there was no time for him to produce a properly prepared edition, one which, apart from anything else, had expurgated those entries which exposed its author’s frustrations at his comrades and audience alike in decidedly brusque terms. Furthermore, as Boos points out, ‘Morris could not wound the feelings of potential Commonweal readers by commenting on the low level of comprehension in his audience’ (43). Fortunately for us, such concerns and the circumstances Morris encountered which generated his ire are available to be studied in all their unadorned immediacy in these pages. Having Boos’s footnotes to consult proves invaluable in order to follow Morris’s many references to SL business and associated musings on the political to-and-fro of the milieu he moved in. Indeed, such is their appositeness and well-judged level of detail that collectively come to constitute a commentary in parallel with Morris’s own words. The result is a document which goes a long way towards helping disperse the saintly mists which have accrued around the revered figure of William Morris and, instead, allows us to glimpse this bustling, combative and conviction-driven man on a daily basis as he went about his business over the course of several months in 1887.