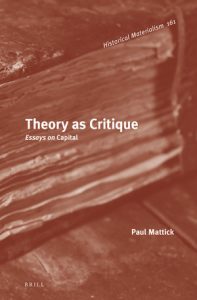 I must begin by forewarning the reader that I find Paul Mattick’s new book to be quite successful and a breath of fresh air, which is much needed against the litany of recent books either interpreting Marx’s overall work with reference to some theoretical notion like ‘Marxism’ or focus on Marx’s mature economic works. Admittedly, the criticisms discussed below are almost assuredly misunderstandings on my end instead of problems with Mattick’s work overall. Moreover, none of the criticisms constitute fundamental theoretical issues, but instead constitute personal pet peeves or issues of needed clarification.

What separates Mattick’s book from many others is that Mattick really is trying to guide the reader charitably through Marx’s work, developing Marx’s own theories, without ever feeling compelled to develop his own form of Mattick-ism. Mattick is not trying to separate his reading of Marx into its own academic or activist project that will generate acolytes and detractors, nor is he offering a ‘new reading’ that resurrects Marx in a novel form aimed at comprehending the supposed essential differences between 19th and 21st century capitalism.

If there is any ‘school’ of Marxism to which Mattick’s book may belong, it is the school of social form theory. Fellow social form theorists include but are not limited to Patrick Murray, Tony Smith and the late Moishe Postone. Social form theory seeks to separate Marx from the legacy of Ricardo and does not see Marx’s economic output as Ricardo 2.0, but instead sees Marx as beginning from a different set of initial premises offering both a theory and a critique of classical political economy. Moreover, Mattick seeks to understand and explicate Marx’s economic works not in terms of the historical development of ‘Marxism’, beginning with Engels and ending god knows where or when, but instead to explicate Marx by considering the publication of his numerous mature economic writings. Whether or not this explication overlaps with or contradicts ‘Marxism’ is largely irrelevant.

Mattick’s book is a collection of essays, many of them previously published, which have since been edited and refined. Moreover, they are ordered in such a way as to constitute a coherent and overarching narrative that offers a systematic and consistent reading of Marx’s economic works. Although Mattick claims his book is incomplete and piecemeal (10), he certainly discusses every major issue of Marxian political economy that I can register. The usual issues appear: how much did Hegel influence Marx; is the labor theory of value antiquated; does Vol III contradict Vol I; the transformation problem; is Marx’s economics a science; what is the difference between compounded and normal labour time; why does Vol III end with an unfinished theory of class. All are systematically dealt with by Mattick. I lack the space to summarize Mattick’s stance on all these issues but would urge any reader of Marx(ism) concerned with any of these issues to purchase the book, confident she will not be wasting her time.

However, there is a primary and unique thesis that undergirds Mattick’s assessment of all these issues regarding Marx’s critique of political economy. Mattick does in fact think Marx’s political economy is a science that in no way violates but in fact lives up to the standard scientific method and contemporary philosophies of science. However, he does not think Marx’s political economy is a science that can be tested, since capitalism is an open system and not a closed off laboratory. Contrary to many Marxian political economists, such as Michael Roberts and Andrew Kliman, Mattick does not think in principle the data economists and economic institutions provide can be somehow converted into Marxian datum to test Marxian theory (241-263).

For Mattick, the reason Marx remains a proper scientist is that his method of analyzing capitalist society is one of idealization and abstraction. This process of idealization and abstraction leads Marx to ‘an analysis of capitalism in terms of a small enough set of basic features to make possible an understanding of its continuity over several centuries’ which ‘shed[s] light on specific historical phenomena’ (15). That these phenomena are reoccurring clues us to the fact that Marx’s idealized and abstract model of capitalism really does constitute its own inner essence, and reoccurrence of phenomena constitutes a form of validation for a theory that cannot be tested in a closed environment (Chapter 11).

Mattick sees in Marx’s introduction to the Grundrisse and Capital an understanding of the scientific method in line with the development of natural science. Since Marx lacks ‘chemical reagents’, or a laboratory in which to conduct experiments, he decides to analyze the cellular form of capitalism, which allows for its continuous motion and reproduction. Mattick justifiably and frequently cites Marx’s writings that draw from the natural sciences and its jargon.

For Marx to ascertain the cellular form of capitalist reproduction he must first abstract away all the particular historical and social features of capitalism he sees around him. Next, Marx forms an idealized model of capitalism which is capable of being analyzed in abstraction from said social-historical forms. Just as there is nothing essentially different about my cells versus Mattick’s cells, there is nothing essentially different about 19th century Victorian capitalism and 21st century American capitalism. Abstraction and idealization constitute a model upon which Marx can develop his theory of capitalism. If the model is accurate, reoccurring historical phenomena will not be surprising since Marx’s theory provides explanatory power to render such phenomena comprehensible. Moreover, the model can be ‘concretized’ over time, as phenomena are made to fit within the theory.

Mattick’s rendering of Marx’s scientific method is cogent. The Darwinian model of evolution for instance is initially quite abstract and quite ideal: traits are heritable, some are advantageous while others are not and not all populations survive in equal proportion. From here evolution is further concretized by manifestations of particular evolutionary operations (e.g. the evolution of this species of snail and its sliminess is explained within the initial idealized and abstract model of evolutionary theory). Mattick argues that despite the development of Hegelian-Marxism or the unrelenting academic exercise to comprehend how Marx stood Hegel on his head, Marx’s political economy is no exception. For Mattick, Marx inverted Hegel with a proper development of the scientific method. That Marx needed Hegel to do this is a fortuitous historical result, but Marx’s political economy is no more Hegelian than Darwin’s theory of evolution, or Einstein’s theory of relativity.

Mattick is most compelling when dealing with theorists who see in Marx some form of Hegelian teleology or a theory of history. As Mattick rightfully argues, Marx has no theory of history, he is only theorizing about he advent of capital in Western Europe in its most abstract and idealized form. Whether or not capitalism would necessarily reproduce across the globe, or one day be overruled by socialism, is not part of Marx’s scientific model. Mattick argues that because Marx did not adopt Hegel’s method, metaphysics or teleological theory of history, Hegel’s role in Marx’s political economy is more a matter of style than substance: ‘Hegelian turns of speech here provided a literary form, a “method of presentation” for Marx’s complex scientific argument’ (63).

According to Mattick there is also no fundamental contradictions between Vol I and Vol III, nor are they internally irreconcilable as Bohm-Bawerk, Bortkiewicz and other critics, including Marxists and neo-Ricardians, have alleged. Vol I is an idealized and abstract model used to determine the origin of surplus value via unpaid labour time. Issues of finance, credit, competition, etc., are largely left out of the model. As Marx develops his theory of capital, the model becomes ever more concretized, culminating in Vol III (28-29). That Marx’s work is a critique and a science rests on the fact that the science of political economy, unlike the science of chemistry, is only operational so long as the social form of capitalism is operational. Since Marx shows that capitalism is a particular social form, and not trans-historical, this means capitalistic political economy is a science that historically came into being and can therefore be exiled or transcended. It is Marx’s emphasis on social form, instead of seeing the categories of political economy as ‘necessary features of every social system of production’ that ensures Marx is not Ricardo’s inheritor (73). The critique of political economy is embedded in the science of political economy via the theory of the fetish of commodities, where historical social relations take on natural properties. Because of this distortion, to conceptually and critically transcend political economy, we must understand it. Moreover, we must understand how fetishized capital is an abstraction that dominates us both in our daily working lives and in our mental conceptions.

Two hardly substantial criticisms that could be made of Mattick’s book stem from his conclusion that Hegel’s influence is one of style and not substance since Marx was essentially providing a natural scientific account of capital. However, Marx does frequently refer to value and capital as ‘the subject’ of capitalist society, of which workers and even capitalists are its dominated appendages. What Marx means by this is hotly debated and as far as I know, Hegel casts a substantial shadow over that entire debate. It is not at all clear how Marx, being a natural scientist, happens to overrule or inform the debate. I wish Mattick had weighed in more here.

The second concern is that Mattick’s demonstration that Marx is a natural scientist draws heavily from various contemporary philosophers of science (e.g. Nancy Cartwright, Peter Godfrey-Smith, Michael Weisberg, etc.). This leaves me wondering either how did Marx in the mid-19th century happen to uncannily comprehend capital under a contemporarily justified understanding of science, which seems improbable, or has Mattick loaded into Marx a theoretical understanding that simply cannot be there? Mattick admits that he wants to clarify Marx’s work using contemporary language, specifically ‘terminology developed within the philosophy of science over the last fifty year’, instead of relying on mid-19th century terminology (8). Perhaps there is nothing inherently wrong with such a desire, however, language evolves historically too, and I wonder if making Marx speak through the filter of recent philosophy of science, instead of clarifying his views on his own terms, doesn’t distort Marx’s theory? I try to read all philosophers of the past centuries as having something to tell us, instead of us having something to tell them (this strikes me as the most charitable way to read them). As such, it is often our one-dimensional, commodified, reified and stringently analytical language which needs to be negated by past terminology, not the other way around. Nevertheless, I repeat sincerely that anyone interested even loosely in the topics here will not be wasting their time with this book.