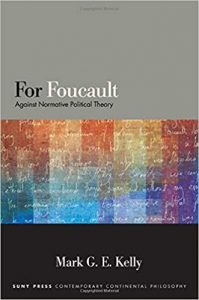 The aim of this book is to undermine the prevalence of normativity within political theory by advancing a non-normative reading of Foucault, where normativity is broadly defined as theory based on ‘prescription’ and ‘oughts’ (2). According to Kelly, the problem of normativity is that it constrains ‘political action through ideas about the way things should be’ (2). Although a lot has already been written on this topic, Kelly expands the debate through an examination of different thinkers who, according to him, challenge normative political theory but ultimately maintain a normative dimension.

This is important for two reasons. First, it provides context to Foucault’s relation to normativity, which is not a direct rejection of the normative turn in political philosophy, but the result of ‘working in a context where non-normativity was already quite firmly established…’ (3). Secondly, Kelly’s project challenges the dominance of normativity in political theory, which, in its current form, is still under the shadow of the ethical turn of the 70s. The problem of this dominance is that it limits the possibilities for other ways of thinking (Taylor 2009). Foucault’s alternative is ‘…to analyse things in order to undermine them’ (9) and ‘making visible, and thus intensifying the struggles that unfold around power’ (4).

Nonetheless, the book presents two problems. First, Kelly also provides an interpretation of Foucault as an anti-theoretical and anti-political thinker, in the sense of being against the systematization of theory and against the narrow definition of the political as party politics and statecraft (11-12). However, this interpretation could have been developed further, particularly in terms of its justification and the implications of this reading. Second, Kelly’s reading of Foucault as anti-normative, anti-theoretical and anti-political serves as the base for the comparison between Foucault and the other thinkers. As we will see, the implication of this reading is that compared to Foucault, these thinkers are portrayed as deficient.

Chapter 1 is dedicated to Marx. Kelly interprets Marx as a predecessor to Foucault’s rejection of normativity in two ways. First, Kelly argues Marx did not provide a moral condemnation of capitalism, but an analysis of how capitalism works as a system. Second, Kelly reads Marx’s rejection of idealism in favour of materialism as an anti-normative move. Furthermore. Kelly’s reading aims to challenge any assertion that ‘Marx prescribes the kind of society we should live in, morally condemning capitalism and commending communism’ (21). Particularly, Kelly contests the appropriation of Marx by neo-Kantianism, including post-Rawlsian political theorists who aim to articulate Marxism as a prescriptive enterprise (22). Conversely, Kelly situates Marx in the European tradition of post-Hegelian anti-normative thought, contending it is possible to avoid normativity without losing critical power by showing people the hidden connections that affect them without moral judgement (33).

Kelly then moves to examine Lenin, who is significant for two reasons. First, Lenin’s success in getting the Bolshevik Party to power, which can be understood as both a theoretical and practical accomplishment. Secondly, Kelly understands Lenin’s theory and praxis not as the inevitable consequence of Marx, but as part of Marx’s philosophical lineage. Therefore, Lenin sheds light on some general problems in Marxism – mainly the problem of historical determinism – which is exemplified in the ‘Bolsheviks’ confidence in the progress of their revolution’ (58); while also containing its own particular problems, which can be summarized as the tension between Lenin’s democratic theory and his authoritarian practice (40). However, Lenin’s relation to Foucault is less clear, apart from Kelly’s positioning of Lenin at the beginning of the genealogy of one-party governmentality (41); and the claim that Lenin is located at an awkward position between Foucault and normativity, due to his recognition of the need to ‘smash politics, and dispense morality’ while still relying on Marxist theory as a guide to action (57).

Subsequently, Kelly outlines the relationship between Foucault and Althusser, who he sees as the closest from Marxism-Leninism. Nonetheless, Kelly argues Althusser ultimately retains a normative perspective due to his commitment to state-oriented politics, the PCF and Marxist theory (72). In Kelly’s words: ‘I read Althusser as attempting to get out of the problem of both Marx and Lenin’s normative-political-theoretic entanglements, but ultimately failing to do so precisely because of his commitment to Marxism-Leninism’ (59). Particularly, Althusser’s aim was to eliminate Marx’s early Hegelian metaphysics, while remaining Marxist-Leninist. In opposition to this, Kelly argues Foucault’s renunciation of Marxism allowed him to recover ‘a useful kernel from Marx’s thought…’ (69), for example of Marx as an inspiration for the development of new ways of thinking, without the commitment to Marxism as a unifying theory and as an ultimate goal.

In the next chapter, Kelly explores Deleuze’s relation to Foucault, by empathising on the differences between both thinkers. In Kelly’s words: ‘Deleuze’s thought is animated by clear normative preferences, which are cast in theoretical terms and used as the basis for the development of a philosophical system’ (72). Specifically, Kelly argues Deleuze’s philosophy of creation posits innovation as ‘a value in its own right’ and as an invitation for endless change ‘to coincide with reality’s own structure…’ (93). Therefore, for Kelly, the main difference between both thinkers is that while Foucault ‘aims to demolish existing strategies of power through critical analysis of their operation…’ Deleuze ‘…aims to build a new positive account of reality in order to free constrained creative forces’ (76). However, it is important to note that Kelly holds a very particular interpretation of Deleuze as an advocate for the unconstrained liberation of desire, making several references to Peter Hallward’s reading of Deleuze without acknowledging the extensive debate that this reading generated.

Chapter 5 centres on Rorty, who according to Kelly is sympathetic to Foucault’s critique of the transcendental power of norms, but ultimately remains committed to normativity (95-96). Compared to Foucault, Kelly argues Rorty falls short for two reasons. First, although he acknowledges that norms are embedded in society, his aim is not to diminish the power of norms. Second, although Rorty recognises the existence of diverse political ideas in society, he argues there are no alternatives to political liberalism (97). The implication of this is that critiquing liberalism is futile, since for Rorty ‘one cannot criticize if one does not have an alternative vision’ (101). Overall, while Foucault wants to criticize and undermine the values that seem natural for our society, Rorty seeks to pursue them (96).

The next thinker examined is Honneth, who is part of the third generation of the Frankfurt School of Critical Theory. Kelly criticises the underlying logic of Honneth’s project, where Foucault is situated between Adorno and Habermas, as a stage in the progress of social philosophy. This implies that Foucault is ‘…someone whose thought has been superseded both by Habermas and Honneth himself’ (110). For Kelly, the problem of this logic is that it ends up blurring the differences between Foucault and Critical Theory, which lay on their relationship to the Enlightenment tradition: while for Honneth critique needs to rely on existing values as a basis for social movements, Foucault abandons this idea in favour of a more minimal continuation of the Enlightenment as a historical investigation.

Chapter 7 focuses on Geuss, who Kelly argues is the most radical thinker of a recent strand of Anglophone political philosophy that has moved closer to continental philosophy, but remains sub-Foucauldian (135). Geuss criticises political philosophy for being disconnected from politics. In particular, Geuss denounces ‘ethics-first’ approaches, which he describes as a ‘form of political idealism descended from Kant that sees politics as a matter of the application of principles derived from reflection’ (127). For example, Geuss criticises Rawls for not dealing adequately with the problem of implementation of his theory (128). In contrast to this, Geuss advocates for a realist political philosophy that begins by observing how politics actually works, and not how it should be. Similarly to Foucault, Geuss understands normative principles as contingent and empirical actualities, not transcendent universal bases (131). However, according to Kelly, the problem with Guess is that although he recognizes that there is no objective basis for evaluation, he still holds that political theory should make value judgements and inform public policy.

The final chapter is dedicated to Foucault. Kelly’s reading is situated against criticisms based on the assumption that political thought requires a normative grounding. This assumption has led to either the rendering of Foucault’s though as incoherent, or to the charge that Foucault does indeed posit normative values. In this sense, Foucault’s later work on ethics and subjectivity has been understood as ‘…a belated recognition of the purported normative deficit in his thought and an attempt to correct it’ (150). Kelly indirectly addresses this reading by focusing on Paul Patton’s work. Patton’s position is peculiar; in his early work he defended a non-normative reading of Foucault’s conception of power, resistance, freedom and truth. However, Patton’s later engagement with Foucault surrounding the issue of rights is based on the assumption that ‘…Foucault’s position can coherently incorporate normativity’ in a historically relative form (155). In opposition to this, Kelly understands Foucault’s invocations of rights as a tool for setting limits to power (156). Therefore, rights can serve as means for resistance against the status quo, for example by demanding new rights that challenge existing power structures. Lastly, Kelly argues against interpretations of Foucault as sympathetic to neoliberalism by arguing that in opposition to Foucault, neoliberalism is ultimately normative because it ‘proposes measures, and holds up a utopia of the market…’ (166).

To conclude, although I am sympathetic to Kelly’s non-normative reading of Foucault and his much needed defence of non-normativity, I want to return to the issue of judging other thinkers in Foucault’s terms. Kelly sets up these thinkers to fail from the start, for example for ‘not going far enough in evading normativity’ (95) – in the case of Marx; or for going ‘too far in his anti-Marxism’ (95) – in the case of Rorty; or for not being anti-Marxist enough – in the case of Althusser. This move does not constitute a cartography of the terrain between Foucault and other thinkers, but a judgement on terms that are not their own and that show little concern for each thinker’s own problem. This is particularly problematic given that the normative debate surrounding Foucault’s work was an evaluation of Foucault in terms that were not his own and that missed the point of his project (Bové 1988). Unfortunately, Kelly´s reading of other thinkers in the image of Foucault ends up replicating this problem by not appreciating the fullness of each thinker’s individual projects and contributions. In this way the book creates more problems than it solves in terms of advancing non-normativity.