Marx & Philosophy Review of BooksReviews‘Capitalism: A Conversation in Critical Theory’ by Nancy Fraser and Rahel Jaeggi reviewed by Christian Lotz 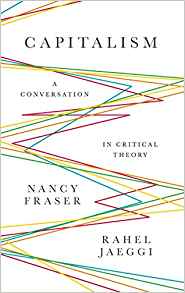 It is well known that recent critical theorists in the Frankfurt School tradition have turned away from Marx’s political economy and a theory of society, as can be found, for example, in Adorno. Replacing political economy, interpretations of culture, Freudian psychoanalysis, and philosophy of history, the focus has shifted to issues related to the concept of rationality, recognition, and the normative foundations of social philosophy. It is therefore refreshing to see that, faced with recent economic and political developments, as well as with increased critique from writers that try to go back to the original ideas of critical theory, there seems to be a slow return to questions that were once central for critical theory. Axel Honneth’s recent book The Idea of Socialism, Nancy Fraser’s Fortunes of Feminism: From State-Managed Capitalism to Neoliberal Crisis and, now, Capitalism. A Conversation in Critical Theory, in which Fraser and the Berlin-based Rahel Jaeggi discuss capitalism as a central framework for critical theory, seem to be signs of an improving intellectual health in this corner of contemporary critical social thought.

The book is divided into four sections: conceptualizing capitalism, historicizing capitalism, criticizing capitalism, and contesting capitalism, all of which are presented in dialogue form, which is a good format not only for a book that claims to become clearer about how to approach “capitalism” and how to reintegrate it within the horizon of contemporary critical theory, but also for the reader, who may more easily follow the main ideas of the two authors. Not only is theory presented in a more lively fashion, but the dialogue form also points to the idea of philosophizing as a non-solitary and social activity. In most chapters Fraser’s concepts stand in the foreground, with the exception of chapter three, in which Jaeggi and her ideas of social practices, forms of life, and concepts of critique take the lead. Overall, the authors discuss a large range of topics that are of importance for contemporary critical thought and the return to political economy. The far-reaching discussions include 1) core considerations of how to think about capitalism as a whole, 2) discussions related to gender, class, and race, 3) problematizing the scope of a critical approach to society, and 4), though less extensive, reflections on the transformation and change that is needed. Both authors do not simply repeat old ideas, but are genuinely concerned with pushing the discussion forward, which makes this book central for everyone interested in recent developments in Frankfurt School-oriented theorizing.

The main methodological struggle that the book tackles is clearly the problem of how to think sufficiently about social totality, the concept of which has plagued the entire Marxist tradition. The authors are going back and forth on this. Overall, the result is ambiguous, if not contradictory, insofar as Fraser repeatedly claims that we need to return to a theory of society that can reveal some kind of logic of the whole, but also repeatedly seems to move away from this task.

On the one hand, the authors are quick to underline that the “the commodity form, while causally consequential, is not at all ubiquitous in capitalist society” (49), which is problematic if we take into account that the commodity form is not some kind of fixed property of goods and services, but, instead, is dynamically constituted by value as a really abstract social form. According to Fraser, “far from generating a single, all-pervasive logic of reification, capitalist society is normatively differentiated, encompassing a determinate plurality of distinct yet interrelated social ontologies” (50). The consequence of this position is to push a theory of social-economic categories and the concept of value as the basic principle of social form into the background. Moreover, if there are several social ontologies, as Fraser points out, a question arises regarding whether we should conclude that they all refer to different social realities (or beings). If this is true, how could they all be social realities, and how are the ontologies related to the concept and reality of society (which is not identical with the “social”)? Fraser underlines that we need to give up the idea of a “monistic social theory,” but it is not clear how far this goes. Jaeggi’s position seems to be similar; for her, we need to analyze society through “social formations constituted through what I call ‘ensembles’ of practices, and these include economic practices as well as social and cultural ones” (137). This might motivate us to ask whether these social formations and practices belong to something like society. For it seems to me that operating with “spheres” and “practices” that are ruled by “their own normativities and social ontologies” (67), and assuming a ”plurality of ‘value spheres’” (68) with “struggles over nature, social reproduction, and public power” (167), leads to the dismissal of a unified critical theory of society, given that the object of such a theory – namely, the society as a categorially constituted and historically specific society – has vanished behind the attempt to do justice to complexity and plurality. One can see here that we are far from leaving the liberal mindset (and I should add, it is an open question of whether transcending the liberal framework is possible at this point in time). Unfortunately, the authors fail to relate their claim about the pluralization of social ontologies to systems theory, post-Marxist thought, such as Laclau and Mouffe, or other theories that prefer to establish the political or ethical over the social. Similarly, Fraser argues that her concept of “institutionalized social order” (52) as a replacement both for the concept of capitalism as an economic system as well as for capitalism as a reified form of ethical life gives “the society a specific shape” (53). Here, again, we should be more precise: if the society has a specific shape (and not many shapes), why would we not grasp this shape as a unity that is categorially constituted? This goes along with Fraser’s confusing claim that “all three modes of oppression (gender, ‘race,’ class) are structurally grounded in a single social formation – in capitalism broadly conceived, as an institutionalized social order” (109). However, what does “structurally grounded” mean?

On the other hand, in the middle of defending the pluralization of normativity, ontologies, etc., we suddenly read that “at the most general level, it does make sense to talk about the orientation to endless accumulation of surplus value” (62). We might ask: what is this exactly, at the most general level? Does this level refer to a methodological level of analysis alone; i.e., is it a subjective principle, or is this level real? If the endless accumulation of surplus is real and is the “most general” structure out there, why would we not come to the conclusion that this is the all-pervasive logic of commodification? And, ultimately, upon further reflection, why would we then not understand reification as the dynamic principle of social domination? This, in turn, can then be analyzed in terms of spatial and temporal dynamics. In sum, we should be skeptical about the claim of Fraser and Jaeggi that social theory of the “monist type” is impossible.

Jaeggi and Fraser want to escape the current liberal left framework and what they call the “regressive” reactions to neoliberalism that we are facing with the current “legitimation crisis” (195). A crisis cannot be invented or constructed; rather, it is in some sense “the real” of capitalism. As Fraser puts it, “crisis is located at the border between the external and the internal, between the subjective and the objective, and between the observer’s perspective and the participant’s perspective” (161). In the light of their rejection of Lukács, it is ironic to see this return to an almost Lukácsian perspective of how to unify epistemology and praxis. In terms of politics, both authors underline that the current liberal left “exaggerates the extent to which the problems are inside people’s heads, while missing the depth of the structural-institutional forces that undergird them” (209). One wonders, however, whether the authors reach those forces in their own debate. For example, with the exception of the ecological issue, there are no discussions of the state apparatus, of violence (for this see my review of Heide Gerstenberger’s new book here), of private property and investment, of the communication infrastructure, of developments of global space and time, or of technology and science as the decisive productive forces of our time.

Not surprisingly, they propose an escape from the liberal framework via a transformation to a more participatory democratic socialism. As Jaeggi underlines, in contrast to the liberal critique of capitalism, critical theory must hold fast to the concept of social struggle and social transformation (123). In this vein, Fraser claims that the anarchist strategy is more “about evading, circumventing, or working around power than about confronting it head-on, and I don’t believe that there can be any major structural change that doesn’t actually confront power” (181). However we might think about this in theoretical terms: those who call themselves anarchists out there, such as the black block, the Antifa, or the PKK, can certainly not be accused of avoiding the confrontation of power.

In addition, how the transition to “democratic planning, participatory budgeting, or market socialism, combining ‘political’ and ‘economic’ forms of coordination” (173) is possible under current conditions, is unclear. What is clear is that Fraser and Jaeggi propose replacing current neoliberalism “with something dramatically different” (195). However, the reader does not learn how this could be done without a central political force that would push the “dramatic” change forward. For example, without a dramatic shift in how we control and return large investments, the growth logic and inequalities will not be overcome. For that to happen, however, one needs to have a unitary political force in power that controls the shift and is strong enough to overcome, or at least heavily regulate, the larger property structure connected to massive investments that is in place today. Redistribution alone will not do it. As far as I can see, there are only fringe parties in Europe and North-America that are proposing something like this, and it has no chance of being supported by a majority.

Overall, the reader of the book is left with more questions than answers. However, this is, paradoxically, very positive. Precisely because the two established critical theorists open up a host of problematic issues, the book is an important contribution to the current situation in critical theory, especially as it both shows its malaise and opens up a path towards its future.