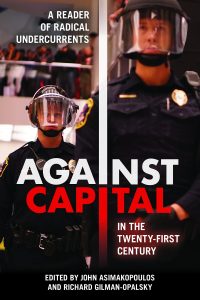 John Asimakopoulos and Richard Gilman-Opalsky (ed)
Against Capital in the Twenty-First Century: A Reader of Radical Undercurrents

It is an almost unquestionable sociological fact that anti-capitalism is a political and philosophical stance that is not in fashion. On the contrary: to think in terms of societies that are organized in non-hierarchical ways and where there are no relations of exploitation among individuals seems condemned to the worst of the utopias, that is to say, to those that do not take into account in a radical way the material conditions of the present and that are limited to grafting an ideal model of society towards which there’s no explanation for how to arrive to it.

However, the paradox is that our present, our society, sees everywhere capitalism doing nothing more than displaying itself as a form of social relationships based on ruthlessly increasing exploitation. The promise of prosperity, welfare and freedom that once was at the origin of liberalism, today is belied in almost any labour relationship. Against this, and here is the paradox, the idea of the need to overcome relations of exploitation is not spread among those who suffer it, that is to say, humanity as a whole almost in its entirety; rather, exploitation and economic benefit appear to be two axes of the social order that has more and more supporters.

For this reason, to defend anti-capitalism today includes a dialectical posture: on the one hand, it does nothing more than produce an immanent critique of the material conditions of western societies denounced as not normal which nevertheless exists as the normality; on the other hand, it implies a way of thinking beyond social materiality, producing more or less viable alternatives of social organisation.

Precisely because of the counter-stance that is anti-capitalism today, there are not many large studies that take anti-capitalism as a serious, effective, powerful and basic position from which to think our contemporary lives.

Against Capital in the Twenty-First Century edited by John Asimakopoulos and Richard Gilman-Opalsky does not fulfill that role, but it is very close to doing so. Its position is, perhaps, anterior to a logical point of view and chronological order. This is a compendium of texts that explores all aspects that, during the 20th century, have formed an anti-capitalist vision of the world. It is a set of texts that shows how anti-capitalist thought has developed throughout the 20th century. It is the theoretical and practical basis from which anti-capitalism in the 21st century must be built. That is the reason why its importance is crucial for the future of emancipatory thought and practice.

The book is divided into different thematic areas, including relevant texts of authors which develop different visions of these axes. For example, the axis “Theory/Practice” includes contributions by John Holloway (“Think Hope, Think Crisis”), Felix Guattari (“The New Spaces of Freedom”) or the very interesting essays by Raya Dunayevskaya who, from the beginning of the 20th century, denounced soviet communism as a different complementary regime of capitalist society.

In the axes that follow, the book explores topics absolutely crucial to the anti-capitalism of the 20th century. In each one of the sections there are contributions that particularly stand out for their theoretical and practical importance. In the treatment of ideology, the collection includes Cornelius Castoriadis’ “Socialism or Barbarism” which develops an orthodox version of the concept of socialism.

Under the theme “Class Composition and Hierarchy”, Selma James’ “Wageless of the World”, calls into question one of the dogmas of classical Marxism, which today seems to have entered into a crisis: what happens with those increasing amount of workers which capital has expelled from the process of value production? What happens with the workers who do not work? This text puts at the center a crucial issue: What is the meaning today of the centrality of work for a definition of the working class in a context in which the reserve army conceived by Marx in Das Kapital is becoming more and more extensive?

One of the most interesting thematics is “Critical Pedagogy”. Here are texts by Henry Giroux (“Beyond Dystopian Visions in the Age of Neoliberal Violence”) and Constantine Skordoulis (“Neoliberal Globalization and Resistance in Education: The Challenge of Revolutionary Critical Pedagogy”). Both contributions stress the importance of education for a post-capitalist future. This issue is particularly important because, for a long time, anti-capitalism has not been able to understand that which penetrates into the reality and common sense of most people. To influence the mode in which to educate children from very small ages on the normality of authoritarian practices, as well as on the normality of capitalist institutions, is a key issue for anti-capitalism to become more than a merely ideal project.

Another one of the fundamental themes of anti-capitalism, reflected in the book, is ecology. In part, Marxism has a concept of nature that involves the almost infinite possibility of exploitation of resources. We must not forget that communism, and despite the experiments of actually existing socialism, is based on material abundance, which emerges from an acceleration of production and an intensification of the development of productive forces. The contributions by Murray Bookchin (“What Is Social Ecology?”) and Isabelle Stengers (“In Catastrophic Times: Resisting the Coming Barbarism”) place accent on this problem.

However, perhaps the most interesting topic in the book, precisely because it is the most original, is the criticism given by the editors of Thomas Piketty’s Capital in the Twenty First Century. The criticism focuses on an idea that is basic to the contemporary development of capitalism: despite the fact that Piketty shows that capitalism has been increasing the gap between those who earn more and those who earn less, his conclusion is not the need to break with capitalism but conformity with the old social democrat recipe, that is, with increasing controls in the redistribution of wealth.

In this way, Piketty seems to subscribe to the idea of Fukuyama and the end of history thesis. After demonstrating the growing inequalities capitalism has produced during the 20th century, Piketty does not goes further, questioning the nature of capitalism as the only mode of production. In this concrete sense, Piketty alienates himself with the liberal idea of capitalism as an end of the history of the development of historical modes of production. Fukuyama’s thesis on the end of history would be the philosophical construction of this global and neoliberal consensus, for which Piketty seems very comfortable.

For this reason, the collection is necessary today. It is necessary to begin removing the alleged historical necessity of capitalism; in other words, it is necessary to destroy the naturalised appearance of the capitalist mode of production as if it were a kind of natural fact to which we can only give resignation. On the contrary, its apparent necessity is only one aspect of its ideological force.

Despite the fact that there are perhaps some issues left unaddressed in the book (e.g. the relationship between animal rights and contemporary anti-capitalism or the contemporary criticisms of the state), the volume nevertheless serves to grasp the rich tradition of anti-capitalism during the 20th century through the large number of topics into which it intervenes. Perhaps the book would also have attempted to look a little further into the future, in the sense of orienting the texts not as a compendium of experiences of the past (the Soviet Union is already an experience a bit far away from us), but as a theoretical and practical basis for the future. Despite the fact that the introduction on Piketty tries to fulfill this function, it is limited to denouncing the lack of commitment by many intellectuals who are able to see the deep inequalities produced by capitalism but who do not want to go beyond this diagnosis.

Despite this, Against Capital in the Twenty-First Century it is already an essential book for taking seriously the project of anti-capitalism, which is none other than the need to fight for the most immediate survival of our planet and our species.