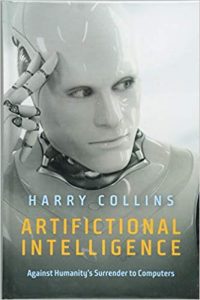 Recent developments in artificial intelligence (AI) can be related to the long-standing discussion within Marxism on the relations of intellectual to manual labour. In the form of the ongoing ‘labour process debate’ initiated by Harry Braverman’s 1974 Labor and Monopoly Capital, this was complemented by Alfred Sohn-Rethel’s Intellectual and Manual Labour, which was finally published in 1978. Whilst primarily an historical materialist account of the social origins of abstract thought, Sohn-Rethel argued that the division of intellectual from manual labour, although it preceded capitalism, has developed progressively with the accumulation of capital. The latest applications of AI, incorporating science and mathematics, can thus be seen as the most recent step in this sequence.

As a Weberian sociologist of science, Harry Collins is placed obliquely to this line of debate. Over the years his studies have ranged from laboratory technicians to scientists searching for gravity waves. His carefully considered conclusions – and particularly the polemical subtitle of this his latest book – are therefore of relevance when supercomputers are busy ‘deep learning’ all by themselves to become AIs. For expertise is the other side of Collins’ interest – gravity wave detectors utilised by a community of scientists with whom he has worked most closely to legitimately participate at least partially in their activities. These involve crunching huge amounts of digital data, similar to the ‘brute force’ number crunching behind current AI that is reducing expert professions to para-professions, simultaneously further undermining the rationale for higher education in traditional middle-class occupations like medicine and law. The same proleterianising logic was being followed when Sohn-Rethel plotted the evolution of manual labour at a time when the development of Fordism was strongly influenced by mathematics to contribute to the development of methods that intensified manual work. Rather than draw on the knowledge and expertise of the workers, mathematics informed processes which were used to fragment labour into itemised tasks, eventually becoming a mechanism that management could impose on shop-floor workers. This resulted in reduced control over their work for the majority, most – but not all – of whom were deskilled to the point of redundancy, leaving ever contracting numbers of core workers either multiskilling across previously demarcated occupational boundaries and/or more skilled in the specialised sense of ability to respond to uncertainty in cases of setting up, maintaining and repairing the newly automated systems. The process was then repeated with rapidly increasing frequency.

One of the questions raised by the development of today’s AI is how manual and intellectual labour can be described after Fordism. Is it a new form of intellectual labour which intensifies a labour process that results in manual labour being even less in control, or does it primarily degrade mental labour to proletarianise the professions? Sohn-Rethel argued that historically intellectual labour contributed to the growth of the management function and so he sees ‘the division of mental and manual labour… [as] another aspect of the same class antagonism’ (Sohn-Rethel, 1978: 170). With the growth of automation, Sohn-Rethel asked whether, if ‘[c]apital grew fat and mighty by sucking the surplus out of labour. Can it continue to grow fat out of its own products?’ (Ibid:175). His book included a brief history of automation, tracing some early forms to the pre-Second World War period when competiveness amplified the pressure to raise the speed of operations to a point which was beyond human capabilities. Technological developments, for example, the photo-electric cell, provided the means to overcome these natural limitations and were a precursor of today’s Information and Communications Technology (ICT). Sohn-Rethel thought that such new forms of automation could result in the displacement of human labour-power but that their logical extension to the whole of production would hamper the maximising of profits because it was easier to find new sources of cheap labour across the world.

The latest use of smart machines threatens to render not just skilled manual workers but everyone unemployed. This would include employers, as profit-maximizing algorithms obviate even their capitalist owners. This leads to the weird prediction of a new class struggle in which humanity is ranged against its machines. Fantasy futures like this would only make us ‘the slaves of stupid computers’ (5), as Collins says. For, as he points out, the bar to AI is not high: passing the famous Turing Test to see whether a computer can successfully mimic a man pretending to be a woman, the machine has merely to speak the language in which it operates with the same facility as any other native speaker; though of course to do so the computer would have to be brought up, or otherwise enculturated, in the society to speak as well as a native speaker. Since computers are not fully embodied humans, ‘the central claim’ (2) of Collins’ book is that this is impossible. In this sense the bar to AI is high and no disembodied machine is likely to pass it.

Only misinterpreting ‘intelligence’ to mean retaining and then regurgitating appropriate bits of information in response to not necessarily connected questions of both general and more specialized knowledge would meet the claim to have created AI, following a definition of ‘intelligence’ exemplified in University Challenge perhaps. As Collins indicates, this should not be confused with the abilities of computers to outperform humans at complex but bounded activities such as chess or Go! These are more akin to the appropriation of skills by computers, ‘tapping the gold in the worker’s brain’ as it was called in Japan. Neither of these forms of ‘intelligence’ indicate the general intellect that deep learning machines will supposedly absorb by trawling the expanding internet to acquire informational omniscience (leaving aside – which Collins explains at length – how they are programmed to seek for and categorize appropriate ‘bits’ of data).

This exercise will not result in AI with a General Intellect that autonomist Marxists imagined could be shared via the internet by a new ‘multitude’. What it can do within more bounded fields is produce the apparently super-intellectual feats of diagnosis and identification that are reliably more accurate than the previous predictions of experts, such as radiographers for instance. Nevertheless, the pattern-matching powers of machines are welcomed as accessories to otherwise often tedious and repetitive laboratory tasks, as long as the human expert remains in control. This is the principle of human-centred technology which Mike Cooley spelt out in the 1980s.

As Cooley’s Architect or Bee? quoted Marx: ‘A bee puts to shame many an architect in the construction of its cells, but what distinguishes the worst of architects from the best of bees is that architects construct in their imaginations what they will ultimately create in reality’ (frontispiece); and imagination is another thing that computers lack, along with bodies! As Collins points out, this limits their ability to deal with uncertainty, fault-finding to repair errors being a characteristic of human interaction that is evident in conversation – save in a carefully monitored Turing Test with a computer mimic! Intentions are therefore crucial, even if they are not explicit but part of what Michael Polanyi called ‘the tacit dimension’ – and Cooley ‘the tacit penumbra’ – surrounding focal awareness in our use of tools, including language. If this is lost so is control as skilful and knowledgeable expertise – whether craft and/or professional – is degraded to competent performance and the repetition of disconnected bits of information. Human-centred activities are thus reduced from quality to quantity by the behavioural monitoring of the machine. This has gone beyond the deskilling of industrial craft in the 1980s to the current disintegration of professional knowledge. As a result, the non-manual middle class is following skilled manual workers into an individualized and insecure mass service sector of fungible operatives.

Whether there is a significant difference between this contemporary situation compared with earlier technological changes that increased the productivity of workers but created new jobs in other sectors and activities, Collins does not really make clear as he does not engage with the labour process debate which Cooley advanced from Braverman. However, Collins contributes to a more specific comprehension of the nature of digital technology today through his analysis of six levels of AI ranging from Level 1 – engineered intelligence controlling washing-machines or cars, to Levels V and VI which would include human-like computers that have not yet been invented.

So, how to challenge the use of digital technology and AI so that it is used to develop good jobs? The Labour Party Future of Work report argues for the importance of work and a strategy to improve the quality of work. It states, ‘Good work is part of people’s identities. It enriches our lives, and enables us to be fuller and better citizens. It reminds us that we – as individuals, communities and a society – build our own future’. A focus on such good work has to inform the application of new technology. It highlights the need for a much more nuanced debate about the impact and potential of digital technology and how to develop jobs which are productive and high quality. The Future of Work report also recommends that the Equality Act should include a right to ‘understand the basis for algorithmic decision-making and to prohibit discrimination by algorithms’. For one of Collins’ shortcomings shared by many other writers on digital technology is that their analyses lack any perspective on gender, race and class. There is growing evidence, for instance, that algorithms are invariably developed from an educated, white, male perspective.

Nevertheless, Collins can be used to understand the limits to the existing levels of AI and to identify areas where workers will be needed to bridge the processes of data gathering and analysis with explanations to service users. A computer may be more accurate in interpreting medical scans but this does not reduce the need to have someone explain the implications of a diagnosis and potential treatment options to a patient. Examples like this can be used to argue against a future scenario in which workers become completely redundant and Collins provides succinct support for this view.

Sohn-Rethel thought that automation would be a task for socialism with ‘social production controlled by social foresight’, as Marx put it. 40 years on, this has parallels with the need for workers to understand the nature of digital technology and how it can be used to solve social problems rather than those of profit-driven corporations. If trade unions and educators are going to address how to reduce the loss of skills and knowledge in the latest applications of AI, they will need to understand much more about digital technology, how work is changing and what is expected in future. Harry Collins’ new book contributes to developing this expertise.