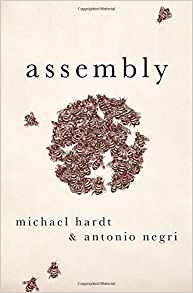 Hardt and Negri’s most recent publication, Assembly, offers a vital and substantive sequel to the Empire trilogy. The overarching argument and focus of the book looks to undermine the recent resurgence of party fetishism espoused by thinkers such as Slavoj Žižek or Jodi Dean, whilst also encroaching upon the intellectual trajectory of Left Accelerationist thinkers such as Nick Srnicek and Alex Williams. In Hardt and Negri’s view, we must go beyond sovereignty and hierarchal leadership, focusing instead on the common of the multitude and its capacity to form outlets of `counterpower’. The three headed Hydra of bureaucratic rationality, private property and political sovereignty must be torn down. Hardt and Negri’s general thesis could be summed up by paraphrasing Deleuze, ‘a government from the left … does not exist’ (The Funambulist 2017). What is ultimately needed is a `New Prince’, not a leader or a movement per se but rather a collectivity of singularities that work in common.

This essentially sums up a large part of the book, but for clarity, the book is separated into several calls and responses. To list the calls: 1. ‘Strategy to the movements’, 2. ‘Invent non-sovereign institutions’, 3. ‘Take power but differently’, 4. ‘Take back fixed capital’, 5. ‘Entrepreneurship of the multitude’ (vii-viii). Hardt and Negri offer five responses to these calls: 1. ‘Ground political projects in social life’, 2. ‘Seek the plural ontology of cooperative coalitions’, 3. ‘The common is not property’, 4. ‘Smash the state’, 5. ‘Produce powerful subjectivities’ (vii-ix). These offer valuable theoretical plains for debate, and it will be argued here that ultimately the broader left is walking a similar path in the quagmire and travails of late capitalism, Hardt and Negri taking one fork in the road whilst thinkers such as Srnicek and Williams opt for another. The following review will attempt to flesh out the key theoretical advances made in the book, whilst also offering an appraisal of those advances. However, the arguments that follow will not touch on the entirety of the text but rather only on what is considered of import.

At the outset, Hardt and Negri pose the central question on the lips of many on the left: where have all the leaders gone? The answer to this question is relatively simple, in that leaders have disappeared from the left through the repeated experience of domination and stasis promoted by individuals or party nomenklaturas. Horizontalism, the decentralised approach to political organisation formed almost like an immune response to the virus of power and its sclerotic effect on movements. However, in the wake of repeated defeats, from Occupy to the Arab Spring, leftists have become disheartened by the seeming incapacity of horizontalist movements to enact long term change. Srnicek and Williams (2015, 60) actively identifying ‘folk politics’ as the heart of the problem. Their position is that horizontalist movements have failed because they are reliant upon immediacy, they are antipathetic towards abstraction, and incapable of changing the structure of power. Their answer is essentially borrowed from Ernesto Laclau: build a ‘socialtechnical hegemony’ through the support of populist movements and parties which can capture the state and civil society (Srnicek and Williams 2015, 143).

Hardt and Negri challenge this position and offer an alternative means to revitalise horizontalist politics. Firstly, leadership must be thought of differently, it must be tactical not strategic (19). Leadership must be conceived of as a reflexive response in the event of certain issues such as police violence. Leaders can act quickly and defensively but must be stripped of that power once the situation of crisis has been averted. Conversely, strategy is reserved for the movement: ‘movements already have adequate knowledge of the social reality and can plot their own long-term political direction’ (20). This position clearly differentiates Hardt and Negri from the resurgence of Leninist thinking articulated by Jodi Dean through which a communist party ‘doesn’t represent the movements. It transfers their egalitarian intensity from the particular to the universal. The communist party finds the people in the crowd’ (Dean 2016, 226). However, Hardt and Negri recognise the futility of a return to the party which would simply ossify a universal that represents only itself, thus repeating the flawed legacy of Rousseau’s general will.

Returning to the topic of populism, Hardt and Negri assert that ‘populist political formations may recognize their source in the movements that brought them to power, but they always end up separating themselves from that source and affirming that political power is a domain autonomous from the social’ (23). Populism is constrained by the reliance on charismatic leadership; and left populism, no matter how well intentioned, often becomes captured by that leadership. Such an intervention is prescient when looking at the Corbyn phenomenon in Great Britain: can a leftist movement successfully work with a historically unreceptive party format? Hardt and Negri are right to point out the potential pitfalls of a populist project which overvalues the realm of the political, whilst undervaluing the role of the movement that operates and propels the leadership forward.

Implicit in Hardt and Negri’s argument is that we must understand and prioritise the realm of social production and its emphasis on connectivity. Attachments to the private sphere or private property work against the tendency towards collaborative production, whilst leftist attachments to the public only serve to bolster state power, subsequently maintaining the violence of sovereignty and its various manifestations. Emphasising the common goes hand in hand with the establishment of non-sovereign institutions; hence the desire affirmed by Hardt and Negri to ‘smash the state’ (133). Furthermore, Hardt and Negri conceptualise ‘machinic subjectivities’ which draws upon the Deleuzian assemblage: ‘a machinic assemblage … is a dynamic composition of heterogeneous elements that eschew identity but nonetheless function together, subjectively, socially, in cooperation’ (121). The concept of the multitude draws on this logic of the machinic, as it is singularities which assemble, cooperate and resist the diffuse nature of capital and biopolitical power. Consequently, our technological culture cannot be delineated from the milieu of human activity and sociality, human and machine are coextensive entities.

Following this, resistance breeds the power which attempts to contain it, yet creatively this process is expansive, which leads us to Hardt and Negri’s controversial appropriation of entrepreneurship. Following from Joseph Schumpeter, they argue that the essence of entrepreneurship ‘is to create combinations among already existing workers, Ideas, technologies, resources, and machines. Entrepreneurs, in other words create new machinic assemblages’ (140). It is up to the multitude to tap into their own entrepreneurial spirit and creatively reimagine the social system as we know it. Although this might provoke a reaction of disgust amongst many on the left, it can be argued that this theoretical formulation of dynamism from below is essential to any egalitarian project.

One of Hardt and Negri’s strongest lines of critique of the existing status quo, is their recognition of the stifling and limiting nature of neoliberal rationality. With the solidification of the nation state comes the increasing encroachment of specialised agents of administration who are needed to oversee a growing military, education system and tax regime. Hardt and Negri paraphrase the arguments made by Max Weber that modern bureaucracy is ‘a form of domination, a form of authority, but one that is superior to previous administrative forms because it destroys their irrational structures and bases its legitimacy primarily in knowledge’ (126). However, this knowledge is very specific, it is a sanitised form of technical knowledge which distils the ontic world to a set of measurable bodies of data: affectivity consequently is discarded.

We must resist the neoliberal process of subjection and revivify our affective and social potential beyond the Weberian rational ideal. It should also be said that neoliberal subjectivity is thankfully not fixed, the plain of selfhood being vested with the propensity for change, and it is a plain of struggle just like the broader social terrain. As Hardt and Negri argue: ‘Resistance is always present in power from the beginning, as is the potential for rupture. The processes of subjection, then, and the production of subjectivities that are functional to power are themselves both precarious and shot through with resistances and alternative potentials’ (222). The multitude must undermine the neoliberal ideal at every turn. It is an unfortunate aspect of the book, that this argument does not continue the expansive theorising of love’s ontological capacity found in Multitude and Commonwealth. As they argue in Commonwealth, ‘Love is an ontological event in that it marks a rupture with what exists and the creation of the new. Being is constituted by love’ (Hardt and Negri 2009, 181). To emphasise love as a political category is a means to invest it with transformative potential, to recognise as Spinoza did that love (as opposed to hate) is invested with a generative capacity. Love creates where hate destroys, and within Hardt and Negri’s work, love provides the conceptual foundation for a plural ontology which can reconfigure the nature of the political undermining deductive or constrictive modes of politics. An emancipatory politics of love could therefore offer the potential for undermining neoliberalism.

Assembly offers a wonderful exploration of the potential for the left to challenge global capital, with possible new modes of struggle offered throughout the book. Already covered has been the rethinking of leadership, the emphasis on the social and necessity for a new affective ontology and subjectivity. This review could have gone further and explored the idea of a ‘social strike’ in which trade unions and social movements work in concert to undermine capital (150), or it could have delved into the critique of finance and the proposal of a new ‘subversive money’ in tangent with a universal basic income (225). However, these arguments are not original to Hardt and Negri’s oeuvre, and only partially diverge from broader debates. Where there is explicit divergence, is between Hardt and Negri and the Left-Accelerationists on what should be done with the remnants of Modernity. For Srnicek and Williams we must ‘reclaim modernity, build a populist and hegemonic force, and mobilise towards a post-work future’ establishing a Promethean politics of self-mastery (Srnicek and Willliams 2015, 80). Whilst Hardt and Negri argue that we must reject every transcendent ‘telos, every goal imposed from the outside, and instead embrace a telos constructed from below, from within the desires of the multitude’ (233). It is clear then that the question of modernity is still open, and that the Accelerationists come to the debate from above, whilst Hardt and Negri look up from below. Both seek the same destination even if their means of getting there are very different. Assembly consequently offers a positive intervention within this debate and is certainly a must-read for those on the radical left.