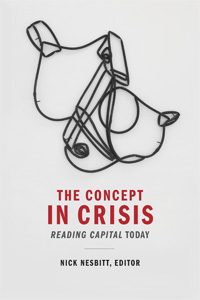 Over the last few years, there has been a renewal of interest in the works of Louis Althusser. Some of his works, such as the Reproduction of Capitalism and the complete edition of Reading Capital, have recently been published by Verso, and there have been a number of new books about him. One of these books is The Concept In Crisis: Reading Capital Today, which is a collection of essays that frames Althusser’s Reading Capital in the contemporary political conjuncture. It has contributions from some important theorists, such as Alain Badiou, Etienne Balibar, Nina Power, Warren Montag, and Bruno Bosteels. Some the themes of the book are the reception of Althusser in Latin America, feminist debates around Reading Capital, the role of theory in Althusser’s philosophy, and contemporary applications of the symptomatic reading.

The book opens with a helpful biographical essay by Nick Nesbitt on Althusser’s life, and the political context in which Reading Capital was produced. Nesbitt provides a fairly extensive overview of the reception of Althusser’s writings. Although Reading Capital was originally published with contributions from Althusser, Balibar, Jacques Ranciere, Roger Establet, and Pierre Macherey, its reception was based on the 1968 abridged edition, which was the first English translation of Reading Capital. Nesbitt points out that this abridgement, combined with the abridged nature of his other texts, has resulted in Reading Capital being reduced to a few themes: the epistemological break, the symptomatic reading, and the critique of ideology. Nina Power addresses this in her contribution, in which she says that feminists have failed to appreciate Althusser because they have reduced his writings to a tool to critique patriarchal ideology. As a result of this, most people have failed to appreciate the full depth of Reading Capital and how it can inform revolutionary theory today. One of the novel approaches of this book is that it avoids reductive readings of Althusser, or ones that are overly polemical such as Ranciere in Althusser’s Lesson. Each chapter demonstrates how Reading Capital can provide a theoretical intervention in today’s capitalist political situation. As the editor Nick Nesbitt says, the book tries to reinvent “Reading Capital for a renewed communist philosophy and critique of political economy in the twenty-first century” (13). The writers thus pose questions that open up new sites of theoretical production in relation to the problems analysed by Reading Capital.

In the contribution by Nina Power, she explores how Althusser’s theory of reading can be used to develop a new feminist reading of Marx. In Reading Capital, Althusser introduces the notion of an oversight and symptomatic reading. He shows that the classical political economists, such as Adam Smith and David Ricardo, made serious mistakes because they thought the worker sold his labour rather than their labour-power. They were unable to grasp the nature of profit, as viewing labour this way foreclosed any possibility of a concept of surplus value. Althusser points out that in Marx’s writings, the epistemological break occurred precisely when Marx formulated the problem as the sale of labour-power, which resulted in his theory of surplus value. Althusser then conducts a symptomatic reading, formulating the absent question that is assumed but not conceptually posed by Marx. Power sees this theory of reading as a political intervention, in which antagonism is inserted between the reader and text, in order to disclose its hidden political dimension. She points out how in Reading Capital itself, as well as in some of Marx’s texts, the absent question is the problem of reproduction. Power examines Balibar’s contribution to Reading Capital, where he discusses reproduction without discussing the role of women in contributing to it. Balibar sees that reproduction allows for the continuity of production, describing it as ‘the pregnancy of the structure’ (226) but excludes an explicit reference to women’s labour. Power demonstrates how the absence of the concept makes Balibar view social reproduction in an entirely economistic way, as the reproduction of the conditions of production. In the same way that Marx reformulated the problem of labour as labour-power, Nina Power reformulates the problem of reproduction conducted by women’s labour. Instead of denouncing the writers of Reading Capital, Power concludes that the theory of reading it provides is “an enormously productive one for feminist readings of Marx that seek to supplement and expand on Marx’s analysis while not remaining hidebound by its gaps and absences” (227). As Robert Young points out in his contribution, the symptomatic reading does not simply offer an interpretation, but results in new knowledge (40) that can reorient us towards reality. Power’s essay is helpful in that it is an invitation for feminists to engage with Althusserian theory in order to develop a methodology for their research and produce new knowledge in feminist theory.

Particularly interesting are the contributions by Bruno Bosteels and Fernanda Navarro, who both examine Althusser’s reception in Latin America. The article by Bruno Bosteels provides a detailed exploration of Althusser’s entry into Latin American Leftist circles, showing that Reading Capital and For Marx was studied by people like Che Guevara. Navarro says that Althusser’s writings were intensely debated and discussed in Mexico, Argentina and other Latin American countries. She reveals that in an unpublished text Althusser says that an ideological “Center For Encounters where the interchange of ideas, positions, and experiences…will first come true in the Third World countries” (285). Navarro explores a movement in a ‘Third World’ country in which this took place: the Zapatista movement in Mexico. She points out that the founder of the Zapatista movement, Subcomandante Insurgente Marcos was an avid reader of Althusser, and wrote his graduate thesis on Althusser’s theory of ideological state apparatuses while studying philosophy at the Autonomous University of Mexico. Althusser’s writings played an important part in the theoretical formulations of the Zapatista movement. Navarro points out how the Zapatista’s formulated their approach to power based on Althusser’s ideas about the material practices of ideology. Instead of making their goal the seizure of state-power, the Zapatistas tried to reorganize the army and social institutions in order to make power-relations more democratic. Also, the Zapatistas utilised Althusser’s symptomatic reading of Marx to deconstruct dichotomies used by imperialism to oppress them. Navarro says that for the Zapatista militants, “there exists no antagonistic dichotomies, such as body/soul, good/bad, black/white, conqueror/vanquished” (288). Although Navarro’s essay is very interesting, it does not go into the subject in detail, nor does it look at the role of Althusser’s writings in other movements in Latin America. It would have been interesting to examine how writers such as Paulo Freire, the Brazilian theorist who wrote Pedagogy of the Oppressed, was influenced by Althusser in his anti-imperialist theory of education, or how Althusser was received in socialist Cuba. Despite only focusing on the Zapatistas, the article by Navarro make the Concept in Crisis an excellent volume, as the role of theory in non-European contexts is often excluded.

Another theme that the Concept in Crisis examines is Althusser’s contribution to the Marxism and science debate. This debate, which tries to argue that Marxism is scientific, has recently received some attention by J. Moufawad Paul in Continuity and Rupture, and Helena Sheehan in Marxism and the Philosophy of Science (recently republished by Verso). Althusser was an active participant in this debate. He argued that historical materialism is a science that provides us with knowledge of a mode of production. He made a strict distinction between theory and the object of theory, and argued that scientific knowledge is entirely in theory. In the Concept in Crisis, Alain Badiou explores how Althusser understood theory. Badiou points out that with his notion of theoretical practice, Althusser “is constantly attempting, in fact, to destroy the opposition between theory and practice” (22). Instead of trying to articulate the relationship between theory and practice, Althusser disrupts this binary opposition and demonstrates that theory is itself a type of production. Badiou points out that for Althusser, it is impossible to formulate a communist hypothesis, the truth of which is verified by history. This is because theory concerns a set of abstract forms, which can only be verified in theoretical practice and not through their practical application to an object. Badiou points out that the result of the rupture of the dialectical couple, theory/practice, is the adjectivisation of theory, and its transformation into a somewhat empty term. As he says, we get “‘theoretical validity’, ‘theoretical discourse’, ‘theoretical problematics’, as well as the theoretical itself” (31). Badiou concludes that this is nonetheless an important lesson, and that it is important to maintain the dialectical dichotomy of theory/practice in order to do scientific research. Contra Althusser, Badiou concludes that “scientific practice is the practice in which there is in fact an appropriation of the real object by the knowledge object” (33). In addition to Badiou, the contributions by Etienne Balibar and Warren Montag further explore Althusser’s views on the relationship between Marxism and science.

Overall, the Concept in Crisis is an excellent collection of articles on Reading Capital and other texts by Althusser. The articles do a great job of opening up new fields of enquiry in Althusser’s writings and reinvent Althusser for the contemporary conjuncture. Each article is written in very clear language and provides enough context to be accessible to the non-specialist. Because it explores such a wide range of topics, this book should definitely be the starting point for an engagement with Althusser’s work.