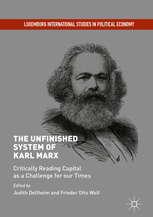 Judith Dellheim and Frieder Otto Wolf (ed)
The Unfinished System of Karl Marx: Critically Reading Capital as a Challenge for our Times

This book is a collection of essays and the second volume in a series entitled ‘Luxemburg International Studies in Political Economy’, produced under the auspices of the Rosa Luxemburg Foundation in Germany. The first volume, with the same editors, appeared in 2016 and was devoted specifically to the major economic work of Rosa Luxemburg, The Accumulation of Capital (Dellheim and Wolf, 2016). This new collection is subtitled Critically Reading Capital as a Challenge for our Times and is much broader in scope. While the diversity of the contributions poses, as so often in such collections, a challenge for reviewers, I will highlight a few of the more interesting methodological themes which emerge.

The introductory piece by the editors focuses on the ‘The Challenge of the Incompleteness of the Third Volume of Capital for Theoretical and Political Work Today’. Dellheim and Wolf note in passing the debate over Engels’ editorial work on Marx’s manuscripts but sensibly suggest that judgements on this should depend on the specific problem under discussion. They also provide five possible reasons for Marx’s failure to finalise the second and third volumes of Capital including some questionable claims that Marx was worried about keeping ‘abreast’ of new academic debates and discouraged by the ‘rather muted (scientific) reception of his first volume’ (10). Curiously they fail to mention the issue of Marx’s health which Fred Moseley rightly emphasises in an appendix to his contribution. Even perhaps more dubiously, they also suggest that Marx had come to realise that his ‘attempt to organise Capital as a whole on the model of a Hegelian syllogism’ (9) was not appropriate given real historical developments such as the ‘emergence of modern finance capital’. But this begs the question of whether Marx did rely on a Hegelian syllogism to organise Capital. The single quotation frequently deployed by David Harvey and others to support this interpretation derives not from Capital itself or any of the later manuscripts but from the introduction to the Grundrisse (which was never published by Marx himself).

The editors do, however, provide a fascinating summary of Gramsci’s critique of Croce for failing to understand Marx’s concept of ‘economic law’. They also highlight Gramsci’s excellent six criteria for a textbook on ‘critical economics’ which he formulated in the course of a critique of the dogmatism of the official Soviet textbook of the early 1930s. The criteria include the item that ‘[e]xamples must be updated. Numerous lengthy quotations from Capital should be avoided’ (20) and for that reminder we should be grateful.

The longest contribution (almost 60 pages including notes and references) to the collection has the title ‘Taking Up the Challenge of Living Labour A “Backwards-Looking Reconstruction” of Recent Italian Debates on Marx’s Theory of the Capitalist Mode of Production’. This was mostly written by Riccardo Bellofiore but appears here translated and ‘strongly shortened’ from an even longer original, with additional ‘remarks’ by the editor Frieder Otto Wolf (31). The result is a text which can be difficult to follow but is worth the effort. Bellofiore initially appears to be reviewing his own intellectual formation as he harks back to the debates of the 1970s involving such Italian figures as Della Volpe, Colletti and Napoleoni, and then segues into some compressed but insightful comments on Rubin, Grossman and Luxemburg who together certainly constitute an unusual trio of influences.

After all that, an illuminating section arrives under a subheading ‘The Transformation as a “False Problem” and an Unexpected Sraffa’. Here Bellofiore provides a succinct but effective critique of the Neo-Ricardian ‘tradition’ derived from Sraffa, whilst seeking to exempt Sraffa himself from the criticisms. The critique correctly identifies the way in which the Neo-Ricardian school fails to recognise the money-form of value, dynamic competition and the ‘antagonism’ within the capitalist labour process, or the fact that the performance of ‘living labour’ cannot be taken for granted (64). In a revealing sentence Bellofiore commendably acknowledges his own earlier failure to understand that if there is to be a ‘normalisation condition’ for the so-called transformation problem, it has to be the invariance of the ‘objectification of living labour’ (65) – a position which aligns him with what is known as the ‘new interpretation’ of writers such as Duncan Foley. The exemption of Sraffa from the critique relies on unpublished material from Sraffa’s letters, quotations from which unfortunately appear to have been eliminated in the editing process.

Jan Toporowski writes on ‘Marx’s Critical Notes on the Classical Theory of Interest’. He stresses that in Marx’s view there was no ‘natural rate of interest’, although over the long-term the average rate of profit sets a maximum limit on interest-rates. He also notes that Marx seems to have agreed with the classical economists that interest was paid out of current profits and argues that this is no longer the case if it ever was.

Judith Dellheim provides a very useful survey of all the points in his works in which Marx refers to the categories of ‘joint-stock company’ (anticipating the form of the modern corporation) and ‘share capital’. This reveals how Marx both emphasised the role of such companies in promoting an expanded process of capital accumulation in sectors such as the railways, and how they provided ample opportunities for speculation and an ‘entire system of swindling and cheating’ (285).

Patrick Bond’s essay is summed up by its title: ‘Capital, Volume 111 – Gaps Seen from South Africa: Marx’s Crisis Theory, Luxemburg’s Capitalist/Non-capitalist Relations and Harvey’s Seventeen Contradictions of Capitalism’. It contains an overambitious – given the available space – attempt to show the relevance of all of Harvey’s contradictions to analysing the contemporary state of South African society.

Georgios Daremas provides a careful and subtle analysis of ‘The Social Constitution of Commodity Fetishism, Money Fetishism and Capital Fetishism’. In the course of his analysis, Daremas notes in passing the deficiencies of ‘circulationism’ (as exemplified by Michael Heinrich) who in his words ‘claim that the act of exchange determines the ‘existence of value’ (228). In this reversal, ‘circulationism’ has fallen victim to commodity fetishism itself” (228). This is a justified if controversial claim which deserves further elaboration in an article of its own. One problem, however, is the author’s inclination to overstate the degree to which ‘[t]oday, producers and consumers are immersed in a ubiquitous commodity universe’ so that ‘no external vantage point exists from which thematising commodity logic per se could be possible’ (234). The assertion appears to be a performative contradiction.

Two significant contributions, from different angles, address the controversies over Marx’s thesis of a tendency of the rate of profit to fall. Both defend the logic of Marx’s analysis and reject, explicitly or implicitly, the Okishio theorem frequently invoked by critics of Marx. Bischoff, Kruger and Lieber, as joint authors of the first of these, begin with a reference to the secular stagnation thesis, influential even among mainstream economists since the financial crash of 2008. They quite correctly in my view locate the underlying dynamic of a rise in the technical composition of capital (or the ratio of dead to living labour) as central to Marx’s own thesis. Over a lengthy period of time this will weaken the dynamic of accumulation unless offset by a rise in the mass of surplus-value. They helpfully describe this tendency as ‘inter-cyclical’, but could have clarified how this underlies the (ir)regular cyclical fluctuations of the system rather than being directly responsible for booms and slumps as some Marxists seem to believe.

Kohei Saito addresses the same issue in the light of his own extensive work on Marx’s manuscripts with respect to nature and the ‘Ecological Crisis’ (Saito, 2017). The result is a distinctive and very impressive essay in which he emphasises how Marx came to recognise the elasticity of capitalism in the light of its ‘stubborn persistence’ (197) despite severe economic crises. One dimension of this elasticity which Saito rightly highlights is capital’s reliance on advances in science and technology to appropriate the ‘free gifts’ of nature, and to benefit from the consequent cheapening of raw material inputs. Elasticity is also a function of capital’s ability to extract more surplus-value from workers with greater intensity, longer hours and lower wages. But the limits to both of these processes are increasingly evident with the coincidence of economic and ecological crisis in the contemporary global system.

A concluding essay by Michael Brie on Marx’s outlines of a future communist society poses a number of very important questions which it understandably fails to answer with any concrete proposals. Brie is right to challenge the idea that under socialism there would be no need for institutional mediation of social conflicts. He is wrong in my view to be concerned about a threat to the dynamics of technical innovation, a concern which may well relate to the experience of so-called central planning in the former East Germany, which had nothing whatsoever to do with Marx’s conception of communism.

This is a collection which reflects both the range and diversity of contemporary Marxian (to use the word preferred to ‘Marxist’ by Bellofiore and Wolf) scholarship, not least within Germany from where the volume originates. It also confirms the need for much more translation into English of work currently only available in the German language.