Marx & Philosophy Review of BooksReviews‘Knowledge in the Age of Digital Capitalism: An Introduction to Cognitive Materialism’ by Mariano Zukerfeld reviewed by Kaveh Boveiri 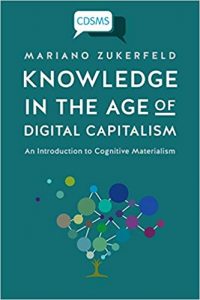 Mariano Zukerfeld
Knowledge in the Age of Digital Capitalism: An Introduction to Cognitive Materialism

Dr. Mariano Zukerfeld’s Konwledge in the Age of Digital Capitalism, which is the first volume of his PhD dissertation, defended in 2010, is a very ambitious book. It covers a wide range of topics for a book of 261 pages. Although it is written in Spanish, Suzanna Wylie’s smooth and engaging translation ensures the English version is a joy to read.

The principal question of the book is how all goods and subjects relate to capitalism, understood as a totality that governs our societies (179). The response is given systematically. In the Introduction, the writer announces a threefold criticism. Marx is criticized for having ‘neglected the analysis of the role of knowledge in capitalist productive processes’ (4), for the shortcomings in his theory of exploitation, as well as his labour theory of value. Autonomist and post-structuralist authors are criticized for having created beautiful but void concepts, for being uncritical towards the capitalist economy, and also for adopting an ideology-laden strategy. Social scientists, including sociologists, philosophers, and economists are subject to the third category of criticism. Their estranging devotion to research aimed at a secure career has led to a cognitive dissonance, so to speak, with respect to understanding the world. It also prevents them from changing it.

The first chapter, Capitalism, Physical Property and Intellectual Property, puts the physical and intellectual property of the objects as two inseparable intertwined components. This is introduced along with physical and intellectual labour, and physical matter and knowledge matter. Three misunderstandings are to be avoided on similar grounds. The epistemological tradition is idealist because, firstly, it adopts a truth-falsity axis instead of truth-knowledge axis; what is more, it takes the subject of knowledge to be ahistorical, ‘the embodiment of the systematic thinker: the philosopher or the scientist’ (180). On the other hand, what both Marxism and the sociology of knowledge admit is that knowledge is a product of material human subjects, and these subjects are conditions by the social factors, and moreover, to study knowledge one has to study these social factors. In so doing, both Marxism and Sociology limit themselves to the ‘social insertion of subjects that create’ knowledge (180). The limitations all these positions (epistemology, social science, and Marxism) have in common is that they are idealist, humanist, and they do not provide us with a definition of knowledge.

Against these positions, what cognitive materialism (hereafter CM) is, can be found in the second chapter, entitled How to Know Knowledge? Introducing Cognitive Materialism. CM is composed of 6 characteristics that distinguish it not only from Marxism, and the sociology of knowledge, but also from epistemology.  The “materialism” of CM is based on the introduction of three forms of matter: first, ‘matter’ meaning all that has mass and volume; secondly, energy; and thirdly, knowledge. All these forms have one characteristic in common; they are changeable. Thus, the immateriality of knowledge is refuted. What is more, CM holds that ‘matter organises itself in systems with emergent properties’ (44), meaning that each level of the existence of matter has autonomous properties particular to that level. This emergent materialism is thereby in opposition to a physicalist materialism, according to which the properties of each level can be reduced to the properties of other levels.

The ‘dialectical’ characteristic of CM constitutes three concepts adopted from Hegelian dialectics: namely, negation, totality, and necessity-contingence. By negation, CM admits the contradiction and incessant movement that is inherent to existence, which brings about novelty to each present movement. Totality puts subject-object and cause-effect in an interchangeable and indissociable relationship in a whole. The dialectical characteristic of contingency and necessity, in turn, is meant to refute absolute determinism put forward against Marxism on the one hand, and the inexplicability of contingence on the other. These two are introduced as two complimentary moments. The fourth characteristic of CM is its non-humanism. Here it is argued that reliance on action is not in harmony with the capitalism we experience, namely, informational capitalism. CM instead maintains that knowledge exists in non-human bearers. Consequently, an analysis based on physical matter and knowledge matter classification is found to be more fruitful than one based on the living-dead labour classification. In so arguing, the dominance of capitalism is held to act upon humans as well as nonhumans. The scientific characteristic of CM is related to four principles: it defines its concepts in the best possible way; it aims to contribute to scientific research; its abstractions must be operable and able to engage with empirical data; and, finally, it should be critical towards itself, ready to rectify its concepts partially or completely. The sixth characteristic of CM lies in its being cognitive. Through usage of the term knowledge matter, it insists that knowledge is the fundamental concept in understanding capitalism; it is therefore ‘the basic building block of a theory’ (51).

The fourth chapter deals with different forms of movement or transference of matter. There are three forms of such movement. Transduction in physics and biology is the transformation of one form of matter or energy into another form. Here, what is transferred does not carry any knowledge. Conversion can be the transformation of physical matter into knowledge matter. What thermometer tells us about the temperature of our body is a sensory conversion; the reverse is called actuating conversion. An example here is the physical function of a machine based on the information given to it. Here a complex concept is introduced, namely translation. This happens when one form of knowledge matter is transformed into another form of knowledge matter or the same form. In the same way that translation between languages is a linguistic phenomenon, translation intended here is a transformation immanent to the realm of knowledge. This is when an explicit form of knowledge is transformed into an implicit one, or an objective form of knowledge transformed into a subjective one, or vice versa. Since capitalist productive process, particularly at the age of digital or informational capitalism, is an example par excellence of translation meant here, the discussion of translation presented in this chapter paves the way for an elaboration on capitalist exploitation, which is also the title of the fifth chapter.

In Conclusions, the author modestly acknowledges several shortcomings of his work. The book failed to develop ‘a knowledge theory of value’ (183), three central themes, namely ‘power, money’ and ‘affects (desires, passions, emotions, etc.)’ (184-185) have not been explored. Moreover, although the author claimed not to have adopted a philosophical or essayist approach, the book ‘scarcely included any data’ (186). Apart from that, there are two issues that leave this reader somewhat disappointed with this otherwise a very interesting book. The first one is where the shortcomings of the book lead to decisive issues in its discussion. I limit myself to one example related to Zuckerfeld’s discussion regarding Marxism. His position here is more of an assertion than a position based on argumentation. What’s more, even if we accept his position, it is not clear whether the shortcomings related to Marxism are related to the changes that capitalism went through since Marx, or whether they are essential to Marxism. In the latter case, further arguments would be required. The second issue is related to the fact that Zukerfeld prefers to ‘take shelter’ in adopting a standpoint shared by Žižek and Marvel Castell regarding the need for further thought, instead of the ‘temptation to act, to directly intervene and change things’ (191). This position leaves the writer in the same position he criticizes in the book, namely, the position incompetent to change the world (4). The reader, who does not see a dichotomy between action and thought and sees himself in the immediate need to take position in social praxis will remain disappointed here. Notwithstanding this, although the book is meant to be An Introduction to Cognitive Materialism, the reader finds a lot of thoughtful but also provocative points for further reflections, enriched by extensive notes at the end of the book.