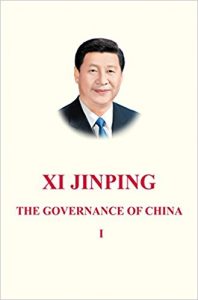 Xi Jinping
The Governance of China

Theo Nyreröd has a Masters in practical philosophy and has written on regulation, whistleblowing, …

The Chinese parliament recently abolished its presidential term limits, sparking suggestions that president Xi Jinping is setting himself up to rule for life. What are the politics of this figure that will be central to geopolitics for years to come?

To answer that question it helps to read through Xi’s book The Governance of China from 2014. Governance is a lengthy 500 pages consisting of speeches to youth movements, presentations at committees, and the like. It is split up into different sections according to topic, treating a wide range of subjects such as socialism with Chinese characteristics, ecology, national defense, economics, and foreign relations. Governance is not a venture into Marxist thought or a level-headed analysis of the problems facing China. It does however provide insights into how Xi wishes to portray himself, and it lays out concrete plans for the future of China.

The removal of term limits is not the only event that has sparked suggestions of a new “Xi Zedong”, a search term banned by the party. It is also the way Xi portrays himself. Governance is filled with images of Xi throughout different periods in his life – all flattering and in agglomeration suggestive of a hero-like character; a friend of everyone, enemy of no one, deeply concerned with the plight of working people, yet university educated and belonging to the Communist Party elite for some time. While his predecessor wanted a strategy of “laying low”, Xi wants China to be more assertive on the world stage.

An assertive behemoth ruled by a Communist Party should make your average American politician see red, but they don’t appear too worried. This may be because to still consider China a communist country requires some substantial mental gymnastics, which Xi attempts in the first section of the book entitled ‘Socialism with Chinese Characteristics’ (SCC). SCC is described as a form of socialism uniquely suited for China’s present situation, and Xi claims that ‘upholding the theory of socialism with Chinese characteristics means upholding Marxism in its true sense’ (34).

While Xi writes that SCC is committed to the long-term goal of realizing communism (36), he also writes that both theory and practice have shown that the market is the most efficient way to allocate resources (97). According to Xi, China is still in a primary state of socialism, and the market-friendly reforms started by Deng Xiaoping 30 years ago were not a shift away from Marxism, but an achievement in the sinicization of Marxism (134). Letting the market play a decisive role in the allocation of resources is not a concession, it is rather ‘a breakthrough in our Party’s understanding of the laws governing the development of socialism with Chinese characteristics as well as a new achievement in the sinicization of Marxism’ (134).

SCC comes down to a pragmatic version of socialism cautious against deriving practical suggestions from theory. Instead, SCC should ‘treat practice as the sole criterion for testing truth’ (45). It is not an antecedent commitment to ideology that determines economic policy, but rather pragmatic evaluation of the outcomes, Xi writes that ‘officials at all levels […] should learn to correctly use the “invisible hand” and the “visible hand” and become experts in balancing the relationship between the government and the market’ (136). In short, the Chinese Communist Party under Xi is as market-friendly as suit their ends.

Communist or not, the policy positions of Governance are remarkably amendable to a European sensibility, and he does not shy away from highlighting current and future problems facing China. Xi recognizes throughout the book that the growth and progress China has experienced in recent decades cannot be expected to continue into the decades to come, and he is measured in his promises about the future. The Chinese economy ‘though large in size, is not strong. Its growth, though fast, is not of high quality. The extensive development model featured by economic growth mainly driven by factor inputs such as natural resources is not sustainable’ (138). The solution according to Xi ‘lies in scientific and technological innovation, and in the accelerated transition from factor-driven and investment-driven growth to innovation-driven growth’ (138). He suggests that China should aim to slow down the GDP growth rate in favor of sustainability (382), and he suggests that we cannot measure growth solely by GDP; China ‘will never again seek economic growth at the cost of the environment’ (239).

As for his views on foreign relations, they appear equally sensible. Xi effectively gives the same pitch to every country: we should work together for a better future, politics is not a zero-sum game, get rid of the Cold War mindset. Well-functioning foreign and regional relationships are prerequisites for accomplishing the largest infrastructure project in modern times: the building of a new Silk Road, or the ‘Belt and Road initiative’. China will be spending in excess of $4 trillion on this project, which involves opening ports in several countries, building railway and road systems that will reduce freight costs of goods from mainland China to Europe. Xi opposes protectionism (362) and is committed to continuing the opening-up reforms started by Deng Xiaoping.

But while encouraging peaceful development, there are also suggestions that China needs to prop up its military (247). One can’t help but wonder why, given the peaceful intentions expressed throughout the rest of the book and the sheer demographic, economic and military superiority of China over the entities and countries with which it is presently at tension. Xi shifts to a more serious tone when discussing Japan, Taiwan, Hong Kong and Macao: entities and countries that have been at tension with mainland China for some time. If Hong Kong grows tired of mainland China’s censorship, maybe a propped-up military could be useful to Xi.

Although the book contains few objectionable policy points – which is likely the book’s purpose – the seeming lack of opposition to Xi’s power grab may come as a surprise to many. But the perceived lack of opposition to Xi’s rise may be just that: a perception created by an increasingly censoring Communist Party. Whatever opposition there may be, both expressing it and finding out about it has become increasingly difficult since the advent of Xi. George Orwell’s Animal Farm was recently banned. China is also developing big-data identification and surveillance systems, and there are efforts to create a nationwide database of information on all China’s citizens. What’s more, they are developing a ‘social credit score system’ for persons with the hopes of full implementation by 2020, even though it has already been put into practice. Your credit score affects your work and housing opportunities, and if it’s low enough, you get banned from domestic flights. Expressing dissent under such conditions may be considered too costly, and induce a form of apathy toward resistance similar to the experiences of dissidents under Putin’s rule.

Governance is not a book I would recommend for anyone interested in Marxist theory or a balanced analysis of the concerns facing China. It contains insights into how Xi wants to portray himself and what policies he intends to enact. Yet as a book it does poorly. The repetitions are endless and maybe to be expected of a work containing a set of accommodating and often vacuous speeches stitched together. Consider the following paragraph: ‘Realizing the goals of building a moderately prosperous [sic] society in all respects and a modern socialist country that is prosperous [sic], strong, democratic, culturally advanced and harmonious, and the Chinese Dream of the rejuvenation of the Chinese nation means that we will make China prosperous and strong, rejuvenate the nation, and bring happiness to the Chinese people.’(60). By making our society prosperous and strong, it will become prosperous and strong – how informative. But these vacuous statements are not to be attributed to any incompetence on Xi’s part, but rather, I believe, to conscious strategy. If there is anything Xi is not, it’s unintelligent. The empty phrases: ‘culturally advanced’, ‘prosperous’, ‘harmonious’, resembles slogans such as ‘Change’ and ‘Make America Great Again’. They conjure up diverse idiosyncratic images in the imaginations of readers – mutually incompatible images of China’s different future, yet giving the impression of a unifying collective endeavor. Governance contains several interesting suggestions and positions, views on philosophy and ethics. But as a book it is below par, and is only recommended to those looking to delve deep into how Xi wants to portray himself and his policies for China.