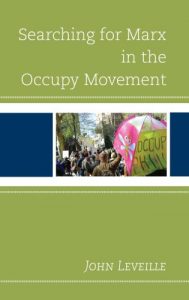 John J Leveille
Searching for Marx in the Occupy Movement

The past decade has seen an upsurge in popular protests, with massive demonstrations erupting across North Africa and the Middle East, Europe and North America. Having emerged in the context of the biggest financial crisis since the 1930s, many of these radical political events have indicated, in one way or another, a general frustration with the systematic workings of capitalism. Despite this context, however, very little work has been recently devoted to developing a sophisticated Marxist theory of social movements. John Leveille has rightly noticed that, with only a few exceptions, mainstream social movement theory has consistently ignored or dismissed Marxist perspectives (2). According to Leveille therefore, there is a need for a Marxist approach that can specifically explain the emergence, character, and development of social movements. His monograph, Searching for Marx in the Occupy Movement, is situated within this literature gap, as he takes up the task of revising Marx’s theory in order to explain the rise, organization, and demise of Occupy Philly – the Philadelphia branch of the Occupy movement.

The first two chapters focus on establishing the book’s theoretical framework. In this section, Leveille claims that Marxism holds the potential to provide a complex understanding of the Occupy movement, and the events of Occupy Philly in particular (xxiv). However, Marx’s theory needs to be, as Leveille puts it, ‘rebooted’ if it is to remain relevant to contemporary capitalism. ‘The core problem with Marx,’ Leveille writes, is ‘that he anchored his analysis on the process of labor.’ (38) Leveille, therefore, considers that a conceptual move from ‘labor’ to ‘humanism’ is essential if Marx’s theory is to be rebooted. As he explains: ‘[t]he essence of the concept of the value of labor lies in the concept of value, not in the concept of labor. What is central, most basic, is the value of human existence as it is realized through social practices.’ (26) Furthermore, Leveille suggests that Marx failed to anticipate capitalism’s ability to adapt; in contemporary capitalism, the value of our human existence is denied not only through labor but through a multitude of channels – such as consumption, production, and social interaction. Consequently, ‘[w]e must focus on the myriad of ways in which the production of human value and capital are in conflict in the world outside of the factory, outside of work.’ (26)

In the remaining chapters (3-12), Leveille applies his rebooted Marxism to a case study of Occupy Philadelphia – with which he spent over nine months as an active participant. Leveille argues in these chapters that Occupy can be understood from the perspective of a conflict between humanism and rational capital, and that this conflict manifested at two different but intersecting levels: the level of being, where capitalism had caused a disembedding of the self; and the institutional level, where the institutional settings proved unable to contain value related conflicts produced by rational capitalism (21).

Chapters 3 to 5 offer an overview of the Occupy movement, and specifically Occupy Philly, focusing on the sociological and contextual factors related to both the birth and operations of this movement. Chapter 3 describes the formal and informal organizational structure of Occupy Philly, giving particular attention to the informal and conflicting groupings that emerged within the movement. Here it is suggested that the conflicting orientations and activities of these groupings played a critical role in the history of the movement. Chapter 4 explains the historical and macro context within which the movement arose. This section describes the aspects integral to contemporary capitalism: marketization, the growth of the security state, the internet, and shows how these contributed to the emergence of the Occupy Movement. Chapter 5 focuses on the proximate causes of the movement: the financial crisis of 2009, demographics, the role of the universities, the alter-globalization movement, and the role of the unions. In these chapters, the author suggests that the Occupy Movement cannot be understood solely from the perspective of interests – that is, Occupy was not simply an instrumental movement, in which participants were driven by rational self-interests. Instead, the movement was as much, if not more, an expressive movement fueled by the frustrations of life in post-industrial capitalism.

Chapters 6 to 9 examine some of the core contradictions of Occupy. In chapter 6, the author suggests that the organizational principles employed by the participants in the movement – such as autonomy, leaderlessness, and power – were often contradictory, leading to confusion and conflict. Chapter 7 focuses on an analysis of the ideological commitments of the movement’s participants. In this chapter it is found that the movement was affected by a fundamental contradiction between a commitment to humanism and to rationality. Chapters 8 and 9 look at the some of the schisms that fractured the movement – such as the political divides and the competing understandings of power within Occupy. Throughout these chapters, the author argues that the conflicts and contradictions observed are linked to the dialectics of capitalism, specifically in the production of the self and of enlightenment values of liberty and equality.

Chapters 10 and 11 describe the relations that the movement developed with external actors: the city government, the police, labor unions, religious groups, students and the intelligentsia, and the public. The final chapter provides a summary of the moral and emotional aspects of the movement, with a specific focus on the frustrations of the participants in the movement.

A few methodological– and in particular theoretical – issues might strike the readers of this book. Firstly, it is unclear why, despite describing capitalism as a totality (11-12; 84-85), Leveille deliberately limits his analysis to the local level – that is, within the borders of the U.S. Thus, in this way Leveille argues that the capitalism described by Marx is very different from contemporary capitalism; as such, for instance, ‘the massive factories that Marx envisioned would produce the objective conditions for workers’ organizations, that is, labor unions, have dried up in America.’ (28) Yet if capitalism is indeed to be described as a totality, then the above argument is unconvincing: a theory rooted in Marxism cannot overlook the fact that factories have not disappeared but have simply been relocated to areas where more surplus value can be extracted from labor.

This theoretical ambiguity prevents Leveille’s analysis from recognizing how particular resistances are linked to broader social totalities. For example, Leveille does not discuss what has otherwise been a key feature of the Occupy movement, one that particularly distinguished it from the alter-globalization movement of the previous decade – that is, the ability to transform a local struggle into a universal one. The concluding pages of the book briefly mention that Occupy was part of a broader global social justice movement; however, since Leveille’s focus is tied to the local, questions related to “how” and “why” are altogether disregarded (274 n.7). Readers who have a particular interest in Marx’s theory will notice therefore that Leveille’s analysis of the Occupy movement fails to engage convincingly with what is otherwise a key element of Marxist theory – that is, the relation of parts to wholes.

Furthermore, such theoretical difficulties are linked with the fact that there is very little direct engagement, throughout the book, with Marx’s work. Leveille’s conceptual shift from labor to humanism – which, in a span of only a few pages, pushes aside Marx’s labor theory of value – will be unconvincing to Marxists scholars particularly because it is done without any direct dialogue with Marx (25-8). Since Leveille never cites Marx in this section, it is unclear for example how labor has stopped being, as Marx strongly argued, an ‘eternal natural necessity’ of human existence, independent of all forms of society (Marx 1990, 133).

Leveille’s reading of Marx, therefore, is made mostly by way of secondary sources. In this way, Marx’s concepts of dialectics and materialism are reassessed with the help of Adorno’s Negative Dialectics (24-5); similarly, humanism, Leveille’s central concept, is understood through Althusser’s theory of anti-humanism (46 n.1). Moreover, Leveille acknowledges that he is strongly influenced by two other Marxist inspired scholars: Valentin Voloshinov and Kenneth Burke (277). This approach combined with a selective treatment of Marx’s theory (25-8) – because of the current historical and material circumstances, concepts such as labor and class are deemed irrelevant – will undoubtedly leave some readers wondering just how much of Marx is left in Leveille’s attempt to reboot his theory.

Beyond the above noted theoretical issues, and as a final point, it must also be noted that the book has a clear activist character. Leveille is aware of the risk of producing a social movement theory that is disconnected from the knowledge interests of the activists and, as a result, does well to stay away from it. Particularly because of its methodological approach – which goes to great lengths to engage with the concerns and challenges of those directly involved with the movement – the book succeeds in being more than a scholastic dissection of the character and dynamics of Occupy (see Leveille’s detailed “Appendix on Methodology”, 277-92). To the author’s credit, therefore, Searching for Marx in the Occupy Movement has the potential to be of interest not only to scholars who are searching for Marxist alternatives to mainstream social movement theory, but also to activists who are preoccupied with advancing their radical political projects.