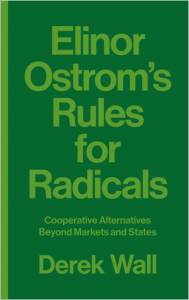 Derek Wall – a radical in my view in his integration of scholarship and Green political and movement activism in the UK – has written a book for other radicals – here I would humbly include myself in this category give my own academic-activist profile – a ‘rule book for radicals’ based on the ideas of a less than radical thinker (and non-activist) Elinor Ostrom.  But then she, and neither Derek nor myself, has a Noble Prize in economics … and in many respects there is no contradiction in drawing radical implications and strategies from someone who themselves is not so inclined. This is the conundrum Wall covers in this admirably short, well-written and sharply observed book.

She is best known as an academic who worked on the commons and common pool resources, who empirically challenged the (in)famous ‘tragedy of the commons’ idea – namely that where something was unowned or owned by all, the resource was overused, unless privatised.  She disproved this through numerous field studies on small, local communities that manage shared natural resources, such as fishing waters and forests. Her work proved that when natural resources are collectively owned and managed, people develop rules (including sanctions and excluding non-owners) around how the resources are used and cared for in ways that are democratic, productive and ecologically sustainable.

As Wall puts it, his task is to “make her work accessible and to show those on the left, especially the ecosocialist left, can make productive use of her diverse and provocative thinking” (13). While largely agreeing with the majority of Ostrom’s work, and clearly inspired by her, which makes his ‘radical’ reading of Ostrom’s ideas a little (but not excessively) forced at times, Wall has not written a hagiography. He points out (often gently and sotto voce), inter alia, the gap between her personal commitment to ‘radical’ ideas and her professional silence on these and her lack of political activism, or her inattention to the importance of culture (117), a flaw Wall (rightly in my view) claims she shares with Marx.

Ostrom herself was a pragmatist (a liberal democratic one perhaps, and a ‘problem-solver’ in the American pragmatist tradition) more than a political radical. She consistently abjured overtly ‘political’ approaches in her research (viewing this perhaps as dogmatic and constraining and violating some (naive) sense of ‘objective’ or ‘value free’ social science).  As Wall notes, “One rule that radicals can take from Ostrom is that we should reject slogans and broad principles but instead focus on interventions. We want an ecological society, so rather than simply proclaiming this we need to ask what this means in practice” (14).  Here ‘bread and roses’ comes to mind, can we not have both? Indeed, do we not need both? Vision and critique alongside policy and practices?

However, I do completely take Wall’s point in terms of Ostrom’s pragmatism acting as a useful counterbalance to the abstract critique and prophylactic proselytising about ‘after the revolution’ than still sadly inflects progressive politics. Later in the book he notes:

While she personally enjoyed debate, problem solving was what she emphasised. She was not looking for an essential and total solution to say, ecological problems or inequality but kept these concerns in the background and was interested in a specific intervention in a particular context (72 emphasis added).

And here one wonders how and in what ways Ostrom managed to background and bracket out inequality for example when examining a problem of resource mismanagement or how and in what ways inequality, power, class, race, or gender were eventually then brought back (if indeed they were) into her diagnosis, analysis and prescription.

Nonetheless, Wall makes a stout defence of the radical implications of her ideas, if imaginatively interpreted and taken from the often dry, formalistic presentation of her defence of the commons, cooperative management of resources etc., within the often deadly dull and politically insipid language of game theory, prisoner’s dilemma, common pool resources and open access regimes.

This book demonstrates that there is a horizon of organisational and creative possibility beyond the ‘state’ and the ‘market’ and that Ostrom’s “careful research is a powerful weapon of self-defence for those who wish to protect a commons under threat” (9). And more than that, such forms of commoning have both a longer historical track record than either state or market (commons regimes and systems predate ‘modern’ state and market modes and institutions) and offer robust ‘actually existing’ examples of nested, localised, democratic and egalitarian forms of politics and political economy. Here it is important to note that while critical of the free market, neither Ostrom nor Wall is suggesting commons as necessarily supplanting the state or are the main or only means and institutionalised practices for the transition beyond ‘actually existing unsustainability’ and ecocidal capitalism (122).  Here commons should be viewed as complementing the state, but … with a preference for decentralising and empowering communities to manage commons as much as possible where feasible. Here, though space precludes a more in-depth discussion, a democratising state (and local state) would empower and enable such forms of localised, citizen-based forms of productive resource ownership and control.

Wall shows that Ostrom herself was more a liberal than a radical (anarchist, socialist, ecologist etc.) but even within that tradition – such as de Tocqueville’s magisterial Democracy in America (an inspiration for Ostrom (11)) – we can find arguments for building a more democratic society and not simply a more democratic political system. And I would be in agreement with Wall in that while she was not a capital ‘G’ Green, her ideas on ‘satisficing’ (53), her critique of overconsumption (47), and concern for the democratic and sustainability benefits of commoning and commons systems, support for more participative democratic decision-making (59), and her personal (but regrettably not professional or political) support for worker cooperatives (57), mean that she shared many of the values and principles of Greens such as Wall and myself and others on the left.  And indeed, there are tentative and suggestive indications in Wall’s interpretation of Ostrom that her ideas are compatible with a distinctly ‘republican’ account of democracy as collective self-management and echo some of the ‘libertarian municipal’ ideas Murray Bookchin (62-7), and that here focus on ‘micro-level’ radical institutional change complements the ‘macro-level’ stressed by Marx (116).

Her eight design rules (28-32), coupled with her stress on complexity, understanding complex adaptive nature-social systems, polycentric decision-making (41), and action at different levels and scales, are all important in helping shape pragmatic and progressive, workable examples of alternative forms of provisioning and institutionalising the management of the ‘means of common life’. The design rules (which should in my view be read in conjunction with permaculture design principles) are as follows: sustainable commons needing defined boundaries; rules for the commons having to fit local circumstances; individuals who use the commons have to participate in making and changing rules; effective monitoring; the use of graduated sanctions for non-compliance with commons rules; low cost conflict resolution; rights to organise; and that commons needed to be part of nested enterprises and systems.

So perhaps it is not so much ‘rules for radicals’ as a ‘gently subversive’ (58) ‘cook book for pragmatic radicals’, implying that the same ingredients can be applied and used differently than the author of the cookbook, and with different possible results, as Wall so ably demonstrates.  And her pragmatic, ‘evidence-based’ cookbook offers some sound advice for radicals (such as myself and Derek Wall, and perhaps you too dear reader) – such as engaging in “problem solving strategies where possible” (82); i.e. it offers people solutions now and not ‘after the revolution’, to complement addressing the root structural causes of those problems; educate citizens in self-governance rather than teaching leaders (86); encourage and practice (as opposed to preach) collective forms of critical knowledge production (101); focus on changing the rules, especially legal ones, as a way of changing institutions (108). But rather than asking ourselves as Wall suggests “what would Elinor do?”(123), we should ask “What can we radicals do with Elinor’s academic cookbook?”