Marx & Philosophy Review of BooksReviews‘Dangerous Minds: Nietzsche, Heidegger, and the Return of the Far Right’ by Ronald Beiner reviewed by Javier Sethness 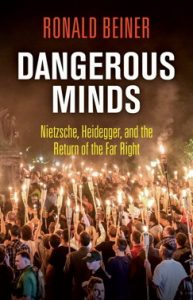 Ronald Beiner
Dangerous Minds: Nietzsche, Heidegger, and the Return of the Far Right

This volume presents compelling critiques of Friedrich Nietzsche and Martin Heidegger as far-right agitators who inspired (Nietzsche) or actively supported Nazism (Heidegger). Author Ronald Beiner connects Nietzsche’s affinities for feudalism with the philosopher’s critique of compassion, morality, and egalitarianism, and he shows how such despotism of thought was reproduced by the Nazi enthusiast Heidegger as well. Beiner details Heidegger’s disturbing commitment to Nazism not only under Hitler, whom he wholeheartedly welcomed in his infamous inaugural address as Rector of the University of Freiburg, “The Self-Assertion of the Germany University” (May 1933), but also within the post-war context and for decades thereafter. In light of the menace posed by the neo-Nazi alt-right, Donald Trump, Vladimir Putin, Recep Tayyip Erdoğan, Viktor Orbán, and Narendra Modi, Beiner is rightly worried that the philosophies of Nietzsche and Heidegger, as anti-liberal critics of modernity, are coming back in a rude way. However, it is doubtful whether the Rawlsian or Habermasian liberal alternative Beiner endorses is the correct treatment for this diagnosis, or rather part and parcel of the same disastrous problematic that is driving the consolidation of neo-fascist forces.

Besides the acute political-philosophical commentary to be found in Dangerous Minds, the author reflects movingly on the inevitable difficulties related to death within the context of Heidegger’s identification of the everyday suppression of the recognition of our individual and social finitude, or finiteness, as raised in Being and Time (1927).

In Dangerous Minds, Beiner discusses the influence Nietzsche has had on notorious contemporary ultra-rightists such as the U.S.-based white supremacist Richard Spencer and the Russian neo-fascist Aleksandr Dugin, as well as the historical Italian fascist Julius Evola, who was an “explicit disciple of Nietzsche” (3). Like Evola, Spencer declares himself a Nietzschean, and Dugin swears by the iconoclast’s ominous statement that “man [sic] is something that should be overcome” (2, 12). These prominent figures of an increasingly powerful Fascist International find inspiration in Nietzsche’s aristocratic differentiation between the putatively “elect” and “unfit peoples” (4) as well as the philosopher’s anticipation of Nazism’s practice of große Politik (“great [or noble] politics”) in his militaristic critique of Otto von Bismarck from the right, as György Lukács points out in The Destruction of Reason (1952), and his “imperialistic critique of nationalism” (136n2). Today’s far-rightists also admire the Nazi Heidegger, who himself took a great deal from Nietzsche, particularly his critique of liberal modernity as nihilistic. To date, reports Beiner, Dugin has dedicated four volumes to discussing Heidegger, with “more to follow” (139n27).

Yet it has not just been the right which has found Nietzsche and Heidegger of use; in fact, Beiner endorses Geoff Waite’s view that Nietzsche also left his mark on the Frankfurt School critical theorists, Albert Camus, and post-structuralists like Michel Foucault, Félix Guattari, and Gilles Deleuze, among others. Whereas one finds few positive references to Nietzsche in Herbert Marcuse’s oeuvre, Max Horkheimer and Theodor W. Adorno admittedly incorporated a Nietzschean skepticism toward instrumental rationality, though they both, like the other Frankfurt School thinkers, held an overall more Hegelian view of rationality, viewing it as also having strong emancipatory potential. As for Camus, his position is ambiguous, given his view in The Rebel (1951) that, on the one hand, Nietzsche’s appropriation by the Nazis represented a great injustice to the philosopher, while also acknowledging that “Nietzscheism was nothing without world domination” and that, when “[p]laced in the crucible of Nietzschean philosophy, rebellion, in the intoxication of freedom, ends in biological or historical Caesarism” (Camus 1951, 75-80). For his part, Beiner illustrates the relevance of Foucault’s adoption of Nietzsche’s critique of truth as power, yielding “post-truth” and “fake news.” Notably, Foucault’s Nietzschean-Heideggerian preference for pre-modern alternatives to capitalist modernity may help to explain his uncritical support for the Khomeinist faction of the Iranian Revolution, whose seizure of power in 1979 effectively put an end to the revolutionary process, as Janet Afary and Kevin B. Anderson (2005) detail.

Crucially, Beiner clarifies Nietzsche and Heidegger’s philosophical critiques of the modern world as being reactionary assaults on the egalitarian legacy of the French Revolution which quite openly sought to entrench imperialistic domination and re-establish feudalistic modes of social organization. Hence, Beiner argues, we should take Nietzsche seriously when he endorses the ideas of social castes and slavery (18, 144n35), just as we should take seriously Heidegger’s explicit admission in 1948 to his former student Marcuse of his uncritical view of Nazism, from which he had reportedly “expected […] a spiritual renewal of life in its entirety, a reconciliation of social antagonisms, and a deliverance of western Dasein [‘Being’] from the dangers of communism” (Marcuse 1998, 265-7). Such pseudo-radical posturing by a thinker who sides with the Nazi dictatorship is precisely what many far-rightists find so attractive in Heidegger: this dramatic perspective, shared by Nietzsche, Dugin, and also the Counter-Enlightenment traditionalist and irrationalist Joseph de Maistre, amounts to the paradoxical concept of ‘conservative revolution,’ whereby the socio-political goal becomes the overthrow of liberal society, the cancellation of the ideas of the French Revolution, and even the abolition of Christianity due to the egalitarianism of the doctrine of Jesus the Nazarene.

Indeed, Beiner argues that, for Nietzsche, “repudiation of Christianity constitutes the necessary condition of a return to an aristocracy-centered culture” (27 emphasis in original). Little surprise, then, that his The Anti-Christ (1895) has been adopted by contemporary white supremacists as a neo-pagan tract—and that his celebration of the idea of the Supermen (Übermenschen) who would overthrow egalitarianism necessarily presupposes “subhumans” (Untermenschen), as the Nazis rather catastrophically put in practice. Moreover, neo-Nazi movements have appreciated Nietzsche’s classification of Judaism and Christianity as ‘slave religions,’ a position that is inseparable from the philosopher’s analysis of compassion as reflecting resentment and weakness—a view which is arguably itself a reflection of rightist resentment. Nietzsche’s explicit affirmation of the “protracted despotic moralities”, which on his account predominated in premodern contexts, demonstrates the degree to which his philosophy is an inversion of that of Arthur Schopenhauer, who emphasizes compassion as being the basis of morality (32 emphasis in original; 161n72). Steeping himself in irrationalism, Nietzsche expressly saw his philosophy as a wholesale destruction—or, to use contemporary parlance, ‘owning’—of “the left,” understood as German Idealism, the principles of the French Revolution, Christianity, and even Platonic and Socratic rationalism.

In contrast to Nietzsche, who died in 1900 and did not necessarily frame his concept of the Superman in ethno-racial terms, Heidegger clearly was a völkisch fascist, an enthusiastic Nazi, and a rabid anti-Semite, as the recently published Black Notebooks (1931-1938) attest. This so-called ‘intellectual’ displayed a swastika at the well outside his cabin in the Black Forest until the war’s end in 1945 (114), and we have already seen his view from 1948 as expressed to Marcuse above. Beiner correctly notes that “[o]nly a real Nazi […] could have written such a letter” to Marcuse, a left-wing German Jew (120). Moreover, in his 1947 response to Jean-Paul Sartre’s Existentialism is a Humanism, Heidegger’s “Letter on Humanism” contrasts the rationalism and humanism extending from Plato and Socrates to Johann Wolfang von Goethe and Friedrich Schiller with the supposedly nationalistic attitude found in Friedrich Hölderin which emphasizes the overthrow of contemporary “uncanniness” (otherwise known as ‘homelessness’) and the goal of establishing a strong homeland, or Heimat. He clearly considers the latter approach more authentic, two years after the end of World War II regardless of the genocidal implications of Nazism.

As Beiner writes, “[o]ne feels compelled to say that here is a man who experienced political events without really experiencing them” (101). Yet this is perhaps too kind an assessment, as Heidegger could not deny what Nazism had wrought on the world. Marcuse for one had brought it up to him in his 1946 meeting with Heidegger in the Black Forest, and then again during their subsequent correspondence. Still, as Beiner relates, never once did the author of Being and Time apologize for his collaboration with Hitler’s regime, let alone concede any wrongdoing. On the contrary, he would continue to publicly defend National Socialism until at least 1966. His friend Rudolf Bultmann reports that Heidegger utterly ignored his request that the philosopher write a confession, like Augustine of Hippo (119).

Beiner’s “call to arms” to liberals and leftists about Nietzsche and Heidegger’s very “dangerous minds” and the resurgence of ‘conservative revolutionary’ rightism is certainly an important and relevant study. The author is justified in finding it “bizarre” that the Nazi Heidegger became one of the most influential philosophers of the twentieth century, and that several leftist intellectuals take after his thought and even describe themselves as Heideggerians (21). Nonetheless, in light of Heidegger’s fascism, Beiner has a point in arguing that left-Heideggerianism should “close up shop” (67). Considering in turn that Heidegger clarified how decisive Nietzsche’s influence was in his becoming a Nazi (111), ‘left-Nietzscheanism’ presumably should do the same. Hence, if Beiner were to be heeded, post-structuralism and postmodernism would likely have to be rethought and overhauled—as they arguably should be anyway, given the ties between these schools of thoughts and the ideas of Nietzsche and Heidegger in the first place. In this sense, Beiner’s volume recalls Richard Wolin’s The Seduction of Unreason: The Intellectual Romance with Fascism from Nietzsche to Postmodernism (2009), and has a similar critical force.

One qualification to this conclusion relates to Beiner’s ideological support for liberal capitalism as an alternative to Nietzsche and Heidegger’s ultra-reactionary actionism. The author of Dangerous Minds at times equates liberalism with egalitarianism, when clearly—as Marxists, anarchists, and other socialists have long noted—liberalism has in fact greatly violated egalitarian principles in upholding capitalism and its inevitably associated racial, gender, and labor hierarchies. Indeed, one cannot overlook Marcuse’s point in “The Struggle against Liberalism in the Totalitarian View of the State” (1934) that fascism grew out of liberal-bourgeois society itself; Lukács makes a similar point overall in The Destruction of Reason. The ongoing transnational resurgence of far-right authoritarianism shows this playing out in real time. Taking all of this into account, instead of the minimalist demands for social-democracy made by Rawls and Habermas and endorsed by Beiner, we should advance and support egalitarian and transformative anti-capitalist critique and social reorganization.