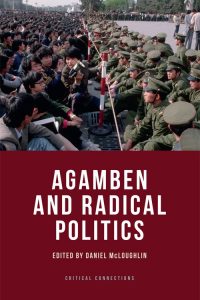 Christopher Griffin is a PhD student at the University of Brighton. He is researching citizenship …

Why is it that questions of timeliness often seem to characterise discussions of Giorgio Agamben’s political philosophy? In the biographical sketches that accompany introductions to his work, it has become a cliché to observe that the early volumes of his Homo Sacer project happened to appear at just the moment when the world needed them, and the latest addition to this narrative is that Agamben has recently repeated the trick. So just as his provocative ideas about bare life and the state of exception coincided with debates about Guantánamo Bay and the Patriot Act, Agamben’s subsequent analyses of economy and government were notably topical: as Daniel McLoughlin points out in his introduction to Agamben and Radical Politics, the Italian edition of The Kingdom and the Glory was published just a few months before the financial crash of 2008.

Perhaps this interest in the immediate relevance of the work reveals the extent to which we need philosophy to help us make sense of the troubling landscape of modern politics. Or perhaps it’s a scholarly tendency, a reflection of the increasing demand to produce academic work that has ‘impact’ and responds to hot topics. But it may also be because Agamben actually theorises timeliness in his work, developing the Greek concept of kairos – the opportune or propitious moment of action – in his ideas about the messianic. For Agamben, the possibility of a transformative political redemption is not about imagining a revolutionary future event, but seizing the opportunity in the present to uncover the decisive moments in the past that initiated contemporary conditions, allowing a new future to emerge. If this is what he is trying to achieve with his philosophy, then it must be said that Agamben has timed things rather well.

Given this kairological context, there is a surprising sense that Agamben and Radical Politics arrives slightly early. This collection of essays aims to examine the recent work on economy and government as it appears in The Kingdom and the Glory and The Highest Poverty, situating Agamben’s ideas within the history of radical (i.e. left-wing) political philosophy and assessing their pertinence to current political struggles. The problem is that Kingdom and Poverty are books within a series, the final instalment of which, The Use of Bodies, was published after these essays were written. This means that the authors are working with incomplete material. Take Agamben’s concept ‘form-of-life’, for example. Two of the essays here treat this crucial and complex topic, but they are unable to consider the whole section of Bodies that is devoted to the subject. While it could be argued that such problems are unavoidable during the study of a living writer, it is difficult not to conclude that it would have been better to wait a year or so to allow the authors to reflect on the Homo Sacer project in its entirety.

This shortcoming will not prevent Agamben and Radical Politics from finding its way into plenty of bibliographies; anyone attempting a close reading of either Kingdom or Poverty will want to consult this collection. And there is a major incentive for all Agamben acolytes: a new essay by Giorgio himself, ‘Capitalism as Religion’, a reflection on money. Citing Nixon’s cancellation of the convertibility of the US dollar to gold as a turning point, Agamben claims that modern currencies are entirely self-referential and nothing but credit. This dovetails with the idea that capitalism is a secularisation of Christianity, because credit is a kind of faith. (Agamben wittily countersigns Walter Benjamin’s essay ‘Capitalism as Religion’ by using the same title, in a parody of the banknote that can only refer to other banknotes in its abyssal promise.) Capitalism is groundless, a system of faith in credit, thus faith in faith; ‘it believes in the pure fact of believing’ (18). Agamben sees this as an example of the defining trait of modern societies, the process of separation that cancels relational guarantees of origin and signification. The essay is impressive in its compression – bringing in Debord on language and the spectacle before touching on temporality and anarchy – making it helpful for readers who are still working out how the pieces of Agamben’s conceptual universe fit together.

Several essays in the collection address the context of Agamben’s interventions, with a particular focus on his fraught relationship with Marxism and post-Marxism. Jessica Whyte’s chapter starts with Agamben’s earliest works and carefully plots the development of his engagement with Marx’s 1844 Manuscripts, arguing that this is necessary for a full appreciation of Agamben’s ideas about praxis, labour, and the will. Along the way, Whyte helpfully reconstructs Marx’s disagreement with Feuerbach about alienation, and explains why Agamben rejects Althusser’s view that the early Marx should be discarded in favour of the later works. Simone Bignall adopts a similar method in her chapter on the anarchist tradition, bringing Agamben into the famously fiery debates that led Marx to break with Stirner and Proudhon. Bignall claims that Agamben and Proudhon share a Spinozan approach to property, which partially explains the disappearance of Marx in Agamben’s recent books. This convincing thesis allows Bignall to suggest that the philosophical response to the ‘anomic crises produced by capitalism’ must put traditional anarchist ideas to new use (64-5).

Two chapters seek to situate Agamben’s thought within the context of Italian Marxism. Jason E. Smith uncovers references to the operaismo movement in the important early essay ‘Form-of-Life’, revealing that a concept which has now taken centre stage in the Homo Sacer project has roots in 1970s post-workerism. This chapter will be of interest to anyone looking to compare Agamben with either Negri, Tronti, or Virno, and to those studying emerging ideas around anti-work. As will Daniel McLoughlin’s chapter, which reads Kingdom and Poverty alongside Debord in addition to the operaisti, to show that Agamben’s critique of capitalism is more substantial than it may first appear. Sergei Prozorov’s chapter also places Agamben within the contemporary continental scene by comparing him with Badiou. Prozorov contends that the two philosophers misrepresent each other, and have more in common than either would like to admit, particularly on the ontology of biopolitics.

The task of tracing Foucault’s influence on Agamben’s method falls to Justin Clemens. His chapter explains Agamben’s unique approach to philosophical enquiry by explicating the techniques used in many of the texts. But this should not be mistaken for an introduction. Clemens is attentive to the subtle implications of Agamben’s procedural strategies, such as the constant destabilisation of the theory/practice binary. Some of those strategies are demonstrated in Nicholas Heron’s chapter, an Agambenesque archaeology of ‘eternity’ that will fascinate those of us who enjoy unravelling the mysteries of messianic temporalities. If you are researching the links between the Homo Sacer books and The Time That Remains, then this essay should be on your reading list.

The fact that these chapters all aim to contribute to very specific debates in current academia is to be expected in a collection of this kind, but it does mean that they will be of interest to a limited audience. If Agamben’s thought has an urgent relevance for modern politics then it doesn’t exactly come to the fore in arcane philosophical controversies. Does Agamben’s analysis of capitalism help us to identify forms of resistance that might succeed? Can his complex notion of praxis be translated into a programme of action? These questions might be more outward facing, in that they will occur to everyone who approaches Agamben from the left, including non-experts, but that does not mean that they cannot be addressed with the same academic rigour that would characterise more specialised discussions. Given that the book is called Agamben and Radical Politics – not Agamben and Radical Political Philosophy – and is adorned with a photograph of protesters in Tiananmen Square, we might reasonably hope that it would contend with the problem of how to get Agamben onto the streets, so to speak.

Luckily there are three chapters here that are alert to this requirement. Mathew Abbott’s contribution opens with a remarkably lucid and thorough reconstruction of the argument of Kingdom before discussing the political actions that could follow. In Abbott’s reading, the fundamental inoperativity of the economy reveals that there is no task proper or necessary to human life, meaning that we can see the illusion behind the apparatuses of capitalism and attempt to deactivate them. The familiar tactic of the refusal of work is thus newly endorsed by a sophisticated, original conceptual exposition. Intriguingly, Abbott points out that a kind of equality can be derived from this as well: ‘if there is nothing a human being must do or be, then there is no means of ranking … human forms of life according to their abilities, talents or achievements’ (42). This sounds like the starting point for further study; the possible implications are vast. Steven DeCaroli also plants the seeds of future research when he concludes his chapter on form-of-life in Poverty by stating that ‘politics is a type of awareness’ (228). This is a reformulation of Agamben’s dismissal of any praxis that would seek to establish a new political order through revolution. Such efforts could only succeed in launching another violent regime, because the very concepts that make a political order possible – government, law, economy, rights – are mechanisms for the control of human life that work by constantly concealing their own illegitimacy. Finding a way to resist this is the huge challenge that Agamben sets us, yet DeCaroli is cautiously optimistic, suggesting that we start by confronting the contingency of every rule that attempts to naturalise conventions and dogma.

Miguel Vatter’s chapter presents an alternative view, countering Agamben’s antinomian rejection of juridical entities by arguing for a restoration of the ancient institution of the trust. According to Vatter, trusts were anti-hierarchical means of collective ownership and use that were neither public nor private – they correspond with the notion of ‘the common’ that has recently surfaced in the philosophies of Esposito and Negri. What is so impressive about Vatter’s critique is that it identifies an omission in Poverty without destabilising the overarching theory, meaning the trust can slot into the conceptual matrix, extending the Agambenian project. This approach is precisely what is now required from those who wish to engage with the Homo Sacer project. As Abbott, DeCaroli, and Vatter demonstrate, in essays which should be considered essential reading for anyone interested in this stuff, Agamben’s philosophy is a crucial resource for thinking beyond the politics that would deny that a beyond is even possible.