Marx & Philosophy Review of BooksReviews‘The Politics of Unreason: The Frankfurt School and the Origins of Modern Antisemitism’ by Lars Rensmann reviewed by Patrick Ahern 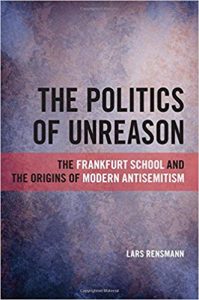 Lars Rensmann
The Politics of Unreason: The Frankfurt School and the Origins of Modern Antisemitism

Patrick Ahern, PhD is a political and ethical philosopher whose research focuses on themes of …

The book entails a theoretical analysis of the role of antisemitism in the work of the ‘first-generation’ Frankfurt School thinkers. This analysis centers upon the work of Theodor Adorno and Max Horkheimer while drawing upon the socio-psychological insights of Leo Lowenthal. There are also less extensive treatments of the writings of Erich Fromm, Herbert Marcuse, and Walter Benjamin.

The theoretical approach of the book unravels the various strands that influence the impact of antisemitism upon the Frankfurt School thinkers. Rensmann accesses the diverse elements of the Frankfurt School’s response to antisemitism by taking on common misconceptions. The overarching misperception that the book addresses is the lack of recognition for the impact that the experience of the Shoah had upon these thinkers as well as a lack of appreciation for the innovative insights provided by the Frankfurt School when reflecting upon antisemitism. The complexity of the early Frankfurt School accounts emerges from the imbrication of sociological and political, as well as psychological, insights woven together to view these issues as they are informed by the dialectical tensions between self and society, rather than a reductive explanation focusing on one social element or another. The complexity of this understanding has led to several other misconceptions about Critical Theory, such as the claims that it is apolitical, asocial, or is dismissive of empirical research. Rensmann addresses these misperceptions through an engagement with the Frankfurt School research that runs counter to such claims. Finally, Rensmann offers a nuanced treatment of the Frankfurt School’s critical relation with Western Enlightenment. In responding to this final misconception, Rensmann leaves the reader with concrete models for responding to present-day authoritarianism while defending an interpretation of Critical Theory that endorses substantive liberal and legal rights.

The book is broken up into nine chapters that focus on various theoretical strains of the Frankfurt Schools response to antisemitism. The first chapter provides introductory insights and the general reflections that guide the subsequent chapters. The second and third chapters address the influence of Freudian conceptions of self and the social psychological aspects of the Frankfurt School’s response to modern authoritarianism. The fourth chapter focuses upon what antisemitism is and how it operates as an ideology that projects individual frustrations and repressions upon Jews. In the fifth chapter, Rensmann reflects upon the inheritance of social theorists, specifically Weber and Marx, for the Frankfurt School while marking the distinctions from those influential thinkers. In the sixth chapter, the most famous iteration of the Frankfurt School’s theory of antisemitism is addressed in a close reading of the chapter in Horkheimer and Adorno’s Dialectic of Enlightenment entitled, “Elements of Antisemitism.” Chapter 7 examines the persistence and mobilization of authoritarian and anti-Semitic influences within ostensibly democratic societies. The insights of this chapter become particularly relevant in the contemporary context in which propaganda, rhetorical tools, and deflections appeal to the repressed and narcissistic tendencies of the disempowered masses in favor of prejudicial and authoritarian leadership. The eighth chapter provides a reflection upon anti-Semitic responses to Germany’s Nazi past and the persistence of antisemitism. The final chapter reiterates many of the criticisms of the Frankfurt School theorists as well as showing how their reflection upon antisemitism provides models for understanding the anti-Semitic, authoritarian, and undemocratic influences in present-day society.

The strength of Rensmann’s account lies in his ability to unravel the strands of dense theory in an accessible way, as well as laying bare the moments of tension, or even contradiction, without offering a reductive account of the issues at hand. While it would be impossible to provide an adequate representation here, two highlights of Rensmann’s account reflect a careful and nuanced reading required of such writings. The first is his account of antisemitism as a ‘pathic projection’. Rather than offering a reductive understanding of a contrast between imaginative or ideological to ‘real’ or ‘concrete’, Rensmann elaborates upon the cognitive and psychological dynamics that turn projection, which is needed for intellectual reflection, into an unreflective ‘pathic projection’. Contra intellectual reflection, which involves a conscious reflection of the projective perception and the object, antisemitism hinges upon a psychological dynamic in which the “self petrifies” and thus breaks with the external world. This incapacity for experiencing the object/other and the “exclusion of reflection” is what leads to a ‘petrification’ of the self, condemning one to living under the force of a false and pathic projection. Another theme in which he sustains a dialectical understanding of the Frankfurt School is found in his account of the critical relation of the Frankfurt School thinkers to the tradition of the Enlightenment. As a theme that runs through the course of the book, Rensmann elaborates, contra postmodern or deconstructive models, how the Frankfurt School’s critique of Enlightenment thinking emerges from an ethical foundation and shared belief in democratic civil and legal rights. Such a reading places the Frankfurt School within the tradition of the Enlightenment, albeit in a deeply self-reflective and critical way.

The book does not, however, offer an uncritical reflection upon the Frankfurt School. In his critical remarks, Rensmann hits upon the moments where a dialectical engagement with the issues surrounding antisemitism are not sustained. Rensmann cautions that tendency to universalize leads to the possible whitewashing of historical, social, and political specificity. Another criticism offered is that the lines, at times, become blurred between “an antagonistic bourgeois society and Nazi barbarism” (p. 283) as well as overgeneralization in the discussion of “ticket thinking” in the Dialectic of Enlightenment. Rather than viewing antisemitism as a mere extension of instrumental rationality (cf. Arendt), the Frankfurt School also reveals the social and psychological dynamics that move toward anti-Semitic delusions. Thus, if one is to follow the insights of the Frankfurt School, this transformation from bourgeois domination to annihilation must be clarified, yet it at times becomes blurred.

The Frankfurt School thinkers are shown to draw significantly upon an intellectual inheritance of Marx, while extending their understanding of antisemitism beyond the traditionally Marxist understanding. This extension of the Marxist tradition is performed through a critical reconsideration of concepts such as reification, ideology, and social resentment. Rensmann makes the rather strong claim that, “Critical Theory’s very understanding of ideology changes – and becomes post-Marxist – in light of antisemitism.” (p. 236) Most notably, antisemitism is not seen as derivative to the economic or ‘material’ base. Rather than ascribing to the notion of antisemitism as a manipulative ideology sold to the unwitting masses, the Frankfurt School understands the role of constitutive subjectivity and social and psychological dynamics that make antisemitism an ideology that operates “bottom up,” and can even run counter to traditional ruling interests. Rensmann critiques Horkheimer and Adorno, arguing that there are conflicting passages in which the ruling elites are somehow viewed as exempt from anti-Semitic delusions, which Rensmann identifies as a residue of orthodox Marxism. These passages counter Critical Theory’s post-Marxist conception of antisemitism in which, “The Marxist components are now integrated into a multidimensional approach incorporating social psychology, new ideology critique, and the dynamics of social reification.” (p. 295).

The strength of Rensmann’s reflection on the Frankfurt School’s account of antisemitism is that he lays bare many of the challenges of attending to the concretely specific realities of anti-Semitic delusion and oppression with the aspiration to respond with substantive insights in defense of universal democratic and civil ideals. In a period where the forces of authoritarianism and prejudice appear to be gaining ground, Rensmann’s analyses and reflections on antisemitism are particularly timely and urgent.