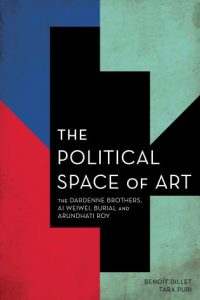 This book examines the relationship between art and politics by looking at the work of four contemporary artists: the Dardenne brothers, Arundhati Roy, Ai Weiwei and Burial. While these artists use different mediums and come from different backgrounds, what unites them is the task of creating a space for politics in their art (111). In Dillet and Puri’s words: ‘art comes as a desire to reconstruct the political space within art from its ruins’ (3). These ruins come as a consequence of the main challenges facing contemporary art: the rise of marketing and communication, the discredited value of art, the need to create its own space in a media-saturated milieu and the commodification and reincorporation of art by capitalism. As a response to these challenges, Dillet and Puri focus on the materiality of art, defying the immateriality of our time of financial capitalism. This helps illuminate the relationship between art and politics: ‘because this artwork is a product of labour and has a material consistency, it exists in the world and has a world to play in its affairs’ (6). The authors provide a nuanced position between the excessive belief in art’s power to change the world and resignation.

Chapter 1 provides an outline of the main influences of the book. The aim is to create a synthesis between Rancière’s aesthetics and Groys’ poetics that takes into consideration both the visible and the technical process of the artwork (20). Rancière’s contribution to art theory is the displacement of aesthetics from the science of feeling and taste to ‘ways of sensible being’ that have the potential of creating a new distribution of politics through a reorganization of the sensible (14-15). Although according to Rancière ‘there is no royal road from art to politics’, there are ‘scenes of dissensus’ that create a moment of rupture where new forms of life can emerge (15). Rancière’s conception of aesthetics is supplemented with Groys’ poetics, which places emphasis on the material space of art. Whereas aesthetics is concerned with the aspect and origin of the artwork, poetics concentrates on the conditions of existence of art, including the economic dimension of production. Poetics gets rid of the traditional distinction between the active producer and the passive consumer, showing the artist and the spectator can preform both roles. In fact, during the twenty-first century, the rise of social media and digital technologies caused a shift from the mass consumption to the mass production of art, by making production more accessible. This lead to the aestheticisation of everyday life as we become ‘our own PR machines’ (20). The theory of techno-aesthetics understands the connection between the technical developments of production, aesthetics and politics.

Chapter 2 examines the cinema of the Dardenne brothers. In contrast to the common examination of the characters’ composition and relations, or the moral consequences of their actions, Dillet and Puri examine the operation of space and the city. This implies shifting the analysis from individual narratives into the narrative of post-industrial Belgium, connecting the individual to the city. As the authors point out, ‘perhaps one of the most intriguing aspects of the Dardenne’s cinema is how they manage to capture a precise sense of place and time without a direct reference’ (32). They do so by speaking about specific political situations, which provide a diagnosis of contemporary society: ‘this is a world of ordinary injustice, economic insecurity and a cruel lack of opportunity…’ (30). The films construct an image of the precarity of life in cities with no future, where the city becomes a ‘platform onto which the characters emerge’ (32) and develop, bringing visibility to the lives of people who have been silenced and consigned to marginal spaces: ‘illegal immigrants, criminals, teenage parents, junkies, trailer-park inhabitants’ (35). These protagonists are portrayed as subjects in their own right through a ‘materialist cinema that refuses to fictionalise and dramatise the plot’ (33). The characters are filmed from odd angles and the use of background music and long dialogues is avoided to escape sentimentality. Ultimately, the characters manage to re-appropriate the undesirable spaces to which they are relegated, creating spaces of resistance: ‘… somehow the protagonists still manage to steal back some humanity, a silver of hope – incomplete, perhaps illusory, but there’ (30).

Chapter 3 explores the work of the writer Arundhati Roy, who makes room for politics through language. For Roy, language is a site for struggle: language can be a tool of patriotism, it can be used to dehumanize the enemy and justify aggressive policies. Language can also be used to resist: ‘resistance… lies as much in action as in learning the searing possibilities of language, in cracking open the grand narratives of progress and development told by collusions of state and corporate interests’ (51). An example of resistance through language is Roy’s screenplay In Which Annie Gives It Those Ones, which is written in a combination of English and Hindi spoken by students in order to resist the homogenous idea of ‘Indianness’ (53). Additionally, Roy’s characters shed light on the extreme poverty of India as they resist the type of architecture that serves the most privileged and excludes the poor, an architecture that increases the gap between the city and the non-city: ‘the city consists of a number of institutions… these institutions are designed by the architect-engineer. The non-citizen has no institutions’ (55). Roy’s writing manages to bring visibility and humanity to the ‘shadow people, who live in the cracks that run between schemes and institutions’ (56), showing that progress and development mean nothing when a large amount of the population still lives in poverty.

Chapter 4 looks at Ai Weiwei, whose artwork serves as ‘a platform to reconsider the Chinese people’s relationship with their own history and therefore their own historical condition’ (75). For example, the controversial piece Dropping A Han Dynasty Urn -composed of three photographs of an urn being held, falling and breaking -problematizes people’s relation to historical artefacts and the relationship between authenticity and value (73-74). Furthermore, Weiwei relies on a collaborative team who assist him with the production of the artwork and whose effort is documented and shared in social media, challenging the role of the artist as a sole producer and embracing digital media on his own terms (78-79). For example, for Sunflower Seeds, Weiwei hired 1600 Chinese manual workers to create one hundred million porcelain seeds, displaying the creation process in the final exhibition. Weiwei’s aim was to draw attention to the process of production, which is forgotten in capitalism: ‘while in capitalism, this labour is abstracted, in this work of art it is revealed and placed at the very core of the piece itself’ (81).

Chapter 5 is dedicated to the music producer Burial, who surfaced during the London underground music scene in 2006. Burial attempted to remain unknown, displacing the focus on the author and resisting the commodification of the music industry. Listening to his music is a unique experience that the authors brilliantly capture: ‘his songs have a gritty, messy yet dreamlike quality…’ (9). Burial makes a tribute to the London of the 1990s: the rave culture and the rhythms of UK garage, jungle and 2-step. His music is made of a ‘collection of sounds, rhythms and genres’ (94) taken from different artists, films and videogames, which serve as a foundation as he creates something new. Dillet and Puri recognize the difficulties of studying the political effects of music. In fact, they argue music does not have a political existence in itself. It is only through its connections that music becomes political, as the sound moves through our body and connects us to the city and to others. The question they ask is what does Burial’s music do? Personally, I experienced what Burial’s music does while listening to Come Down To Us, which is quoted in the chapter: ‘don’t be afraid to step into the unknown… let yourself go, don’t be afraid…’ (105). This song is about transgender rights, but even before knowing this I felt that if hope had a song, this would be it. Although this seems as an extremely personal answer, it is not. Dillet and Puri convincingly argue that Burial’s music ‘is a music that begins in isolation rather than finishes there…’ as Burial ‘…creates a texture between people’s solitary lives’ (93). As you get lost in Burial’s tracks, you find ‘You are not alone’ (Burial, 2013).

Overall, this book offers a stimulating examination of the relationship between art and politics through the theoretical lens of the philosophy of art in an innovative way. The authors provide a rich set of references to different authors such as Blanchot, Deleuze, Stiegler, among others. However, some of these references could have been developed further in order to clarify how they are connected to the works of art. That said, the book provides a compelling invitation into the work of four apparently different artists, whose commonalities become more and more apparent, and who fit well together in one book without loosing what makes them unique. In fact, one of the book’s most fascinating aspects is how it manages to talk about different artists and mediums in their own right, by intertwining them through the concept of the political space of art. Therefore, the value of this book is not limited to its selection of artists, but also to its focus on the political space of art and materiality. This gets rid of the traditional distinction between art, politics and the world, bringing forth a more powerful critique of our time by moving beyond the analysis of meaning or artistic merit into how art works. Although the analysis of the materiality of art fits remarkably well with the artworks examined, it might also be useful for the study of other artists, not as a method, but as a reminder of the physical space of art and its connections to the world. In the case of the artists explored in this book, the materiality of art brings to light how they ‘use their preferred medium to express and situate modes of being that are imperceptible, silenced in everyday politics’ (112) in hope of a new world to come.