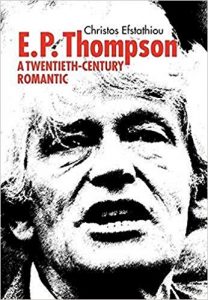 Christos Efstathiou’s study of Edward Palmer Thompson places the emphasis very much on its subject’s role as life-long political activist with his achievements as a renowned and influential Marxist social historian being something of a secondary consideration. The book is compartmentalised into three distinctive phases of Thompson’s public life beginning with his membership of the Communist Party of Great Britain (CPGB), moving on to his dissident involvement with the New Left and ending with an examination of his later advocacy of nuclear disarmament and immersion in the peace movement.

Although this is not a work which dwells on Thompson’s private life or endeavours to dissect his personality to any great degree; what we are told about his predispositions and evolving political persuasions do end up clarifying why the author refers to his subject as ‘a twentieth century romantic’. In particular, there seem to have been some key factors in Thompson’s younger years which left lasting impressions on him and added a dimension of romantic zeal to his later activist endeavours. The death of his elder brother, Frank, who led a partisans’ anti-fascist mission in Bulgaria in 1944 which ended with them being executed by firing squad, imbued Thompson with a lasting desire to keep alive his brother’s vision of a people’s Europe free from tyranny. Add to this his ancestral nonconformist background, student membership in the CPGB and personal experience of Popular Front strategies put into practice via his involvement in helping to build the Samac-Sarajevo railway in post-war Yugoslavia, and all the ideological ingredients which informed Thompson’s political outlook begin to cohere. A parallel factor in all this in terms of shaping the manner in which Thompson conveyed his ideological beliefs was his involvement in adult education and, more specifically, the Workers Educational Association (WEA) and the opportunity this organisation offered to challenge academic elitism.

Thompson’s landmark book on William Morris, published in 1955, represented ‘a key step in the development of his political vision’ (48) not least for the way he identified the capacity of his subject to combine elements of an investment in the Romantic tradition with Marxism in order to produce an ethical critique of human potential. Morris’s communist beliefs and ‘moral realism’ resonated with Thompson’s sense of radical optimism that the post-war world was on the verge of a revolutionary era. During this period Thompson’s membership in the CPGB saw him become a participant in the Communist Party Historians’ Group alongside such notable associates as Christopher Hill, Eric Hobsbawm and Dona Torr. The group’s efforts to ‘unite Marxist theoretical formulations with an innovative account of past society and culture from the perspective of common people’ (27) would remain a characteristic strain in Thompson’s own socio-historical studies, as evident not least in his ground-breaking The Making of the English Working Class. As any perusal of that book will reveal, Thompson focused his intellectual and emotional energies on championing a progressive revolutionary tradition which focused on the people’s struggles and which rejected unalloyed economic determinism as the interpretive key to those struggles. Efstathiou is particularly enlightening when it comes to tracing his subject’s growing dissent from CPGB orthodoxy which, with the Soviet invasion of Hungary in 1956, saw him leave the party but which before that final break had seen Thompson attempt to provide a forum for discussion on the contemporary state of communism by means of The Reasoner journal.

Once out of the CPGB, Thompson, along with his associate John Saville, founded The New Reasoner, calling for a British Marxism ‘which would combine Morris and [William] Blake’s vision with Marx’s thought and connect contemporary political struggles with those of the older movements of the British people’ (70). Thompson’s abiding esteem for the kinds of Popular Front ideals he had witnessed in the thirties saw him develop the idea of a New Left which would oppose the cynicism and apathy of ‘Old Left’ cold war policies in favour of an ‘ideological openness and commitment to resurrect the humanism of a young Marx’ (79). We see how, time and again, Thompson’s New Left aspirations were for a grassroots political activism and the fostering of a new moral temper as a manifestation of unity from below. Unity in general, however, seems to have been in short supply amongst the leading lights of the New Left movement with those young luminaries such as Stuart Hall situating themselves firmly in a post-war political generation which concerned itself with cultural analysis whilst viewing the likes of Thompson and Saville as irrevocably beholden to the nostalgic anti-fascist mythos of the pre-war Popular Front. The various alarums and excursions within the New Left, which led over a surprisingly long period of time to Thompson distancing himself ever more from those in the New Left who, as he saw it, adopted a purely scholastic approach to Marxism rather than seeing it as a philosophical tradition steeped in working class radicalism, are described by Efstathiou with pace and clarity. In addition, the author manages to steer clear of an implied tone of hagiography when it comes to his subject’s views so that, at one point, he is able to unequivocally state that Thompson ‘misapprehended Marx’s economic analysis and tended to stress subjective factors in history’ (113). By 1970, we are told, the New Left’s failure to foment social revolution and the concomitant disarray of his own political strategy left Thompson pessimistic if not totally disenchanted with radical alliances per se.

What for some seemed a counterintuitive move on Thompson’s part was his involvement at the beginning of the 1980s with European Nuclear Disarmament (END), a so-called ‘middle-class based movement’ (117) which this former communist stalwart wholeheartedly supported. END was founded in response to the renewed cold war tensions between the US and the Soviet Union which saw both sides increase their nuclear arms production. Quite apart from Thompson’s natural inclination to actively support European peace movements, Efstathiou sees the deeper political implications of his involvement as arising from his assessment of END’s work as offering ‘the outlines of a strategy of resistance’ against the political establishment’ (117). Thompson had previously been involved with the Campaign for Nuclear Disarmament (CND) during the 1950s, seeing it and similar peace groups as a means of fostering a coalition of radical factions in the common cause of working class unity. In New Left circles CND was seen as a means of developing a movement which would initiate active neutrality and socialism, an aspiration which was ultimately unfulfilled as CND’s political ties with the Labour Party saw the latter’s rejection of unilateralism herald the Campaign’s decline. In a characteristic move, Thompson saw his involvement with END as a Popular Front inspired movement, or as he put it, ‘We must commence to act as if a united, neutral and pacific Europe already exists. We must learn to be loyal, not to the “East” or “West”, but to each other, and we must disregard the prohibitions and limitations imposed by any national state’ (133). As with his account of the factional machinations which beset the New Left, Efstathiou provides a detailed though never overly-punctilious account of the organisational and constitutional challenges faced by the members of END in the quest to build a ‘pan-European non-aligned bloc [as the] best path to peace’ (137). This non-aligned anti-nuclear stance earned the opprobrium of NATO General Bernard Rogers who, in 1983, declared that it was ‘counterproductive’ to American efforts and ‘plays right into the hands of a man named Thompson, who heads the campaign for nuclear disarmament in the U.K.’ (138). Conversely the Eastern European press accused Thompson of ‘working “on behalf” of the CIA’ (139). However politically suspect and indeed duplicitous Thompson the public figure might have appeared to his detractors, he himself, as we are reminded time and again, remained firmly convinced of his Popular Front ideals, ever hopeful of transcontinental radicalism as an alternative to cold war belligerence. Despite its credentials as a critical element of Europe’s network of non-aligned peace groups by the time the Berlin Wall fell in 1989, END was itself experiencing something of a structural decline with a shrinking membership and reduced donations. In the author’s estimation, ‘END was not able to produce a defined social project that would realise Thompson’s socialist vision in a post cold-war era’ (164). Thompson, as the twentieth century romantic, once more glimmers behind these words.

There is a book to be written about the scope and breadth of E.P. Thompson’s accomplishments as a historian and, indeed, the influence he has had on shaping the whole approach to delineating the historiographical documenting of Britain’s radical movements in the eighteenth and nineteenth centuries. Efstathiou’s book doesn’t quite serve that purpose. What it offers instead is a profile of an individual who remained committed to ideals forged in the maelstrom of European conflict and familial bereavement. He, like his lamented brother, saw the possibility of an internationalist future invigorated by a grassroots belief in revolutionary dissent which did not accede to authoritarian diktats. In that sense, he truly was a ‘Twentieth Century Romantic’. But in another far more important sense, Thompson was someone continually trying to make sense of and actively furthering the Marxist ideals which energised him.