Marx & Philosophy Review of BooksReviews‘A World to Win: The Life and Thought of Karl Marx’ by Sven-Eric Liedman reviewed by David McLellan 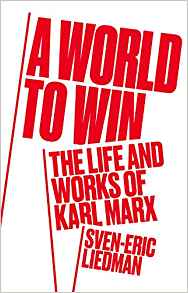 Sven-Eric Liedman
A World to Win: The Life and Thought of Karl Marx

This big (756pp) book was originally published in Swedish in 2015 under the more sensible title of “Karl Marx: A Biography”. The author has, he tells us, updated it for the English translation. He has also added a Preface in which he rather defensively answers the question of why we need another large biography after the sweeping 2016 one by Gareth Stedman-Jones(2017). Liedman’s view is, I think, correct though rather harshly expressed: Stedman-Jones is excellent on Marx’s politics but less so on Marx’s achievements as an empirical researcher and thinker, particularly in the last decade of his life. As I shall try to show below, Liedman’s book is the reverse: he is weak on Marx’s politics, but insightful on the later Marx’s researches into political economy in the broadest sense. Thus they tend to complement each other. One great merit of Liedman’s book is its emphasis on how unfinished is Marx’s work – how, from the 1840s until and including his last decade, he was constantly and continuously evolving, modifying, refining his approach to economy and society. All this is excellently conveyed – though why Liedman thinks that such an enterprise was impossible while the Soviet Union was still in existence (as he claims on his first page) is mystifying.

From this perspective, Liedman gives pride of place to the Grundrisse, Capital, and the “late” Marx of the 1870s. His treatment of the General Introduction to the Grundrisse is as thorough and as accurate as the difficult content allows – though he is too kind to Marx on Greek art. The same goes for his chapter on Capital. The exposition is clear and nuanced. Liedman is particularly good on the transformation problem. And it is very useful to have an account of recent German scholarship incorporated into the discussion – work by Heinrich and Kliman being well-covered. Occasionally it is frustrating to find Liedman a bit too “hands-off”: he outlines, for example, Marx’s reasons for thinking that the rate of profit will fall but gives us no indication of what he himself thinks of this or any indication of where one might go to find further discussion.

Another area where Liedman is helpful is his lengthy account of Marx’s researches during the last decade of his life. Basing himself on material recently published in the MEGA, he shows how widely read Marx was in the natural sciences. He even devotes four pages to Marx’s close friend and fellow campaigner the renowned inorganic chemist Carl Schorlemmer. Liedman is also good on the different approaches of Marx and Engels to the natural sciences. It is a pity that he has not managed to include discussion of the material in Marx’s notebooks on the environment as described in the splendid recent study by Saito (2017). Liedman is also dismissive of John Bellamy Foster’s account of Marx’s ecology, though it is not clear quite what his grounds are.

Almost inevitably, there are some mistakes: Marx did not die “at his desk”: he died in an armchair. The French translation of Capital, though much revised in parts by himself, was not “his own”; it was done by Joseph Roy. More importantly, the length and depth of Liedman’s discussion of Marx’s writings is very eclectic. This is, in a way, quite engaging as it clearly reflects his own interests and predilections. But it does sometimes involve an unbalanced account. This is particularly true of Marx’s more political writings. Take, for example, the articles that Marx wrote for the Deutsch-französische Jahrbücher. In the first, the laboriously entitled “Introduction to A Contribution to the Critique of Hegel’s Philosophy of Right”, Liedman has quite a bit on religion as the opium of the people (and curiously seems to think that Marx’s remarks come after, rather than before, Britain’s opium wars in China), but almost nothing on the striking proclamation of the emancipatory power of the proletariat with which the article ends. In the second article – “On the Jewish Question” – there is, again, quite a lengthy, rambling discussion of Marx’s alleged anti-semitism but little on the main point of the article – Marx’s incisive criticism of the idea of the rights of man and the citizen as put forward in the US constitution. Again, Liedman devotes more than four pages to a relatively obscure 1844 article by Marx criticising Ruge. As for The German Ideology, he has ten (very good) pages on the wearisomely long section on Stirner but only two or three on the section on Feuerbach which many have thought to be Marx’s best account of his materialist conception of history.

Liedman is equally selective in his treatment of Marx’s political writings from 1848 until 1852. There is virtually nothing on Marx’s major role in the dissolution of the Communist league, nothing at all on Marx’s views on Blanqui and the dictatorship of the proletariat in an otherwise extended discussion of “The Class Struggles in France”, and no clear account, in his dealing with the “Eighteenth Brumaire”, of exactly why Louis Bonaparte had triumphed. Generally missing is an awareness of the social background of leading members of the Communist League and the difficulties that this created for Marx. They were artisans whose professions such as tailors or watchmakers made them unreceptive to Marx’s basic view that capitalist industrialisation – which would make them redundant – was a necessary prelude to socialism.

This same selectivity is also evident in Liedman’s treatment of Marx’s later political writings. He rightly relies a lot on the work of Schieder but devotes less than four pages to “The Civil War in France” with little discussion of the proposed election, revocability, and mandating of delegates in the Commune. In his treatment of the “Critique of the Gotha Programme”, Liedman has only a few lines on what Marx has to say about the lower and higher stages of communism and what this has to say about his attitude to justice and equality. The vast literature to which this has given rise merits a more extended discussion.

Finally, this book has the great merit of accessibility. It has commendably short paragraphs and little of what might be called “jargon”. Liedman avoids any lengthy quotations from Marx and paraphrases a lot. This does mean that it is occasionally difficult to tell whether it is Marx or Liedman who is speaking. I cannot comment on the efficacy of the translation, though sometimes the English does seem to go puzzlingly awry. Unforgiveable is the frequent referencing of well-known English-language books – by Hobsbawm, Cohen and others – in their Swedish language editions. And it would have been useful to have a bibliography. But Liedman’s book has a lot to recommend it. In some ways attractively idiosyncratic, the whole may not be more than the sum of its parts, but many of those parts are genuinely original and enlightening.