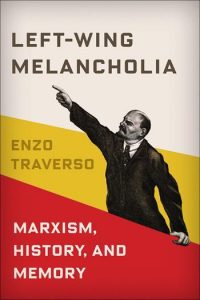 Marc Di Sotto completed his PhD in 2015 and is currently teaching at the University of Edinburgh. …

Traverso sets out the argument of Left-Wing Melancholia against the background of a political landscape thrown into disarray in the aftermath of the fall of the Berlin Wall in 1989. The collapse of the Soviet Union, as he makes clear, had an impact not only on the future direction of the countries of the Soviet Bloc, but also on the future of the left. It also refocused the lens through which the past was viewed. As he puts it, “an entire representation of the twentieth century . . . had fallen apart. . . . The dialectic of the twentieth century was broken” (2).

The impact of 9 November 1989 on the hopes of the left cannot be underestimated. What came down with the wall was not only the grim reality of a failed utopia, but also more than 200 years of continuous struggle. If history’s first serious opportunity at establishing a really-existing communism had rapidly disappointed, the ultimate collapse of the project, grotesquely different from the spirit of its beginnings, felt like a historic defeat to anyone still sympathetic to the initial spirit of the revolution.

It wasn’t that the left was not used to dealing with the consequences of defeat. As Traverso points out, “the history of revolutions is a history of defeats” (32). In Left-Wing Melancholia, Traverso makes a persuasive case that the melancholy of defeat has always been “a hidden dimension of the left” (38). Every revolutionary opportunity of the past 200 years, from 1847 to the Paris Commune, from the Spartacist Uprising to the October Revolution, ultimately ended in defeat. Yet the legacies of these struggles become part of what Walter Benjamin calls the “weak messianic power” of the past, which nurtures the revolutions of the future. Take for example the prominence of Che Guevara on the streets of Paris during May ’68, or the Paris Commune’s declaration of a “universal republic”, a phrase borrowed from 1789 revolution. It is only by remembering that we take lessons from the inspiration and disappointment of the past. It is in this sense that Traverso argues that Marx’s writing on revolution might be best understood as a “theory of defeat” (33).

1989 was different, however, in that it was a defeat on an altogether greater scale than anything that the left had previously experienced. Previously, the left’s melancholic vision had been counter-balanced by a utopian conviction which immediately situated every disappointment in the long view of future history; every defeat could be seen as just another step on the road to inevitable victory. The role of memory was to nourish the revolutionary hopes of the past and thus to open up visions of future possibilities in the historical continuum. 1989 was different in that it did not occur after a battle and did not engender any pride; it ended a century and summarized in itself a cumulative sequence of downfalls that, suddenly gathered and condensed in a symbolic historical turn, appeared as overwhelming and unbearable (22).

In other words, 1989 was not just another example of a defeat of revolutionary passion mustered against the odds, it was an implosion of hope from within “shortcircuiting” 200 years of struggle (3). This was not to say that anyone by 1989 was still blind to the crimes of Stalinism or able to mistake the Soviet Union for a realized utopia. Nevertheless, despite this, the USSR’s continuing existence functioned as a vital link to the lived experience (and hopes) of the October Revolution. Yes, the revolution had been betrayed decades before, but 1989 drew a line under the defeat which condemned the promise of October to the dustbin of history, ushering in the triumphalist ‘end of history’ proclaimed by neo-cons like Francis Fukuyama and François Furet. 1989 was not a defeat in the mould of a crushed uprising; it was a defeat of the imagination.

Previous revolutions had been “factories of utopias” that “forged new imaginaries and new ideas, and . . . aroused expectancies and hopes” (3). The ‘velvet revolutions’ of 1989 only served to put this critical struggle with the legacies of revolution and socialism to rest and left in their wake societies unmoored in a post-historical capitalism while simultaneously “obsessed with the past” (4). Today it can feel that the burden of the accumulated past, culminating in the end of the Cold War, has paralyzed the left’s capacity to imagine utopic possibilities; never mind actually taking the revolutionary ‘leap of faith’. Utopia appears to have become a “category of the past”, while history is nothing but “a landscape of ruins, a living legacy of pain” (7).

Left-Wing Melancholia thus sets out with two main purposes. In the first place, Traverso sets out to diagnose the condition of the post-1989 moment, which he defines in terms of an overwhelming presentism which looks to the past through the lenses of nostalgia and victimhood and to the future in terms of infinite repetition (if not catastrophe). On these diagnoses, he shares something with Fredric Jameson’s critique of postmodernism and Mark Fisher’s work on the imaginative dereliction of life under the conditions of capitalist realism. Alongside this diagnostic work, Left-Wing Melancholia itself performs the kind of melancholic memory work that Traverso spends most of the book sketching out; in it he sets out to rekindle the revolutionary desire from the ashes of defeat one more time.

Left-wing melancholy does not mean to abandon the idea of socialism or the hope for a better future; it means to rethink socialism in a time in which its memory is lost, hidden, and forgotten, and needs to be redeemed. This melancholia does not mean lamenting a lost utopia, but rather rethinking a revolutionary project in a nonrevolutionary age (20).

With this purpose in mind the book is structured as a collection of essay interventions constellating around certain significant ideas, moments or figures, the red thread running through each being the tradition of left melancholy, which, for Traverso, describes both a mood directed towards the past, and a mode of theoretical enquiry. Melancholy turns out to be both the subject of the book and its methodology.

Traverso finds this melancholic mood across a range of media, thinkers and contexts. The first two chapters of the book situate left melancholy in a wider critical discussion around melancholy and memory. These chapters work equally well as general introductions to the broader cultural history of these topics as they do as ways into the book’s arguments about the left-wing culture of defeat. The remaining chapters address such diverse subjects as the melancholic aesthetics of left-wing cinema; a fascinating, if not revelatory, discussion of Bohemia as a place of both retreat in the wake of defeat and a breeding ground for revolution; an examination of the missed encounter between Western Marxism and Postcolonialism as figured through the mutual apathy towards each other’s work of Theodor Adorno and C. L. R. James; a brilliant account of the psychodrama of Adorno and Benjamin’s relationship as told through the history of their correspondence during their years of exile; and, finally, a rather enigmatic, though illuminating discussion of Daniel Bensaïd’s rediscovery of Benjamin in the wake of 1989.

Benjamin emerges as the guiding spirit of Left-Wing Melancholy. The book could feasibly be read as an extended dialogue with “Theses on the Philosophy of History”, Benjamin’s last work written before he committed suicide on the Spanish border while caught between Nazi occupied France and Françoist Spain. This is most marked in the final chapter, where Traverso discusses the work of Daniel Bensaïd and his rediscovery of Benjamin in the 1990s. Bensaïd, one of the key activists of May ’68, was searching for a way out of the left’s post-89 existential crisis, and he found in Benjamin a fellow traveller whose Messianic vision offered some consolation, but also a way forward. What was lost with the end of the Cold War was the teleology of the chain of defeats which had underpinned the struggle for 200 years; defeat is more palatable when it can be situated in a long-view of history stretching forward towards future victory. But, as Traverso emphasises more than once, where Marx saw revolution as the engine driving history forward, for Benjamin revolution is an “emergency brake”, a Messianic moment that bursts through the fabric of the historical continuum. And in this sense it offers a vision of revolution that offers some hope after a faith in historical progress has waned away.

And in this sense, Left-Wing Melancholy is a timely work. Since it was published in 2016, we have begun to see cracks in the “end of history” ideology that was the common sense for the last two decades. 50 years have now passed since the irruptions of May ’68 and we have been living with its ambivalent legacy for half a century. Perhaps what is most striking about encountering this monograph today is that at times it can feel already like a document from a past age. While Traverso’s descriptions of the post-ideological consensus of the end of history feel simultaneously very familiar, they also seem already a little strange, already a little dated. These categories no longer seem to make sense of a world post-Trump, post-Brexit, post-Macron even, where the familiar old-fashioned breed of neoliberals have taken a hit almost every time that they have exposed themselves to the democratic process. Unexpectedly, we find ourselves thrown back into history. Now more than ever we need to reconnect with the struggles of the past and to take a gamble once more on the utopian wager.