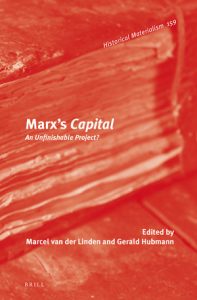 This ‘Marxological’ volume (the 159th in Brill’s Historical Materialism series) originated from papers presented at an Amsterdam conference held on October 9-11, 2014, at the International Institute of Social History, titled `Marx’s Capital: An Unfinished and Unfinishable Project?’ (25).

It was a prestigious project organised by Marcel van der Linden, assembling a varied grouping of scholars from his international network, to grapple with the legacy of Marx’s magnum opus. There were MEGA² experts from the Berlin-Brandenburg Academy of Sciences (Gerald Hubmann is a leading editor of the MEGA²), local and foreign students, and a number of well-known Marx scholars from North America, Europe, Japan and Brazil – including academic superstar David Harvey. The event began with Harvey’s public lecture to a packed audience, billed as ‘The new Marx-edition, or, why a fundamental revision of the dominant Marx-interpretation is necessary.’ Harvey quickly changed the subject though; to the surprise of many, he said: ‘I don’t consider myself an authority on Marx or an expert on Marx, I am a sort of fellow traveller, in a way’. He added that his real concern was with urbanization issues. He proceeded to talk mainly about his own experience with Marx as an inspiration for political action. At the conference on the next day, he reiterated that he was neither a ‘Marxologist’ nor an ‘economist’, and that he intended just to listen (and perhaps comment) on some things, which he did, in a sympathetic spirit.

My own interest in the final text of these papers is that I was invited to the 2014 conference. At that time, in his closing speech, van der Linden emphasized that the event had been ‘underfunded’ (a typical ‘Marxian’ predicament – the MEGA² project itself had experienced funding challenges), and that there was ‘no money’ to publish a book of conference papers; somebody would have to edit the book ‘for free’. I volunteered, and ‘diligently’ edited ten out of the twelve papers (27) in consultation with the authors (neither van der Linden nor myself presented a paper though; in the end, a contribution by Harvey, and Michael Krätke’s paper on Marx’s own crisis analyses, were regrettably not included in the book).

However, when van der Linden offered me the honour of ‘collaborating editor’ status, in exchange for writing the introduction for the book, I declined – among other things, I am not an authority, this had not been ‘my’ project or club of scholars, and I had other work commitments. After that, publication was shelved for quite some time. Van der Linden sought comment about his introduction from ten scholars and friends (xi). Eventually funding was found, and three new assistants helped to finish the job (27). I never saw any proof-sheets or money myself, but the publishing venture ultimately succeeded, even if the conference experience had by now receded into the past.

In the first part of the introduction, van der Linden presents thumbnail sketches of what he calls ten ‘recurring themes’ (2) in the controversies about the interpretation of Marx’s Capital: the ‘architecture’ (plan and structure) of the work, Marx’s method, the validity of the labour theory of value, the transformation problem, the concept of the value-form, the meaning of the labour contract, the significance of the reproduction schemes, the tendency of the rate of profit to fall, crisis theory, and the empirical verifiability of Marx’s theory. This carefully worded summary is suggestive but rather weak, despite copious references. A central question raised in the conference (it had been discussed explicitly by the late Zoltan Kenessey in 1991) was, whether Marx’s unfinished work on Capital was ‘unfinishable’, because 1) Marx’s bad health and political/family commitments (i.e. he could have finished it had circumstances been different), or 2) he could never resolve the fatal flaws in his own argument (91), or 3) the intellectual project forever remained a ‘work in progress’ that Marx wanted to keep extending, revising and updating (63). In this book, this dispute registers only in the papers of Heinz Kurz and Carl-Erich Vollgraf.

More interesting is the second part of the introduction, titled ‘The MEGA² project in context’ which provides some historical background for the MEGA² endeavour. Two appendices list the economic manuscripts in the MEGA² volumes and the topics covered.

In an essay structured as eleven ‘theses’, Vollgraf (a co-editor of the MEGA² edition of Capital) provides a good explanation of the significance and use of the MEGA² edition for modern scholarship , as well as probing the evidence for the real motivations and competencies that Marx had. To the very end, Marx still wanted to complete his work on Capital (60), but not infrequently he ran into problems with his own evolving narrative (69) or began to delve into topics which were not really focused on the task.

In his comment on Vollgraf, Heinz Kurz remarks that Marx himself was not responsible for the ‘actually existing socialisms’ created in his name (84). But Kurz thinks that it is “a pity that we find in Marx relatively little about what constitutes the ‘good society’, and which institutions, laws, and regulations are necessary to achieve and preserve it.’ (86) Kurz laments how the interpretation of Marx’s writings degenerated into ‘what different politburo’s decreed it should be’ (82) – and how self-righteous Marxists failed to absorb the scientific lessons of neo-Ricardian economics (83). In Kurz’s view, Marx’s economics does have strengths, but failed to advance significantly beyond Ricardo’s economics – Marx’s value theory, he claims, is fatally flawed because it failed to reconcile value and price aggregates.

Fred Moseley, an orthodox Marxist economist, provides a clear survey of the development of Marx’s theory of the tendency of the rate of profit to fall through successive manuscripts. There exists no textual evidence that Marx significantly changed his point of view on this issue, at any stage. Moseley argues the tendency is highly relevant today, because, he claims, it has become difficult to raise the rate of surplus value any higher. In his response to Moseley, Timm Grassman (a MEGA² editor) emphasizes a neglected aspect in Marx’s writings: the tendency for the ‘surplus population’ to increase (Grassman notes that a billion people nowadays live in slums), and as its result, a tendency for the relative size of variable capital to decrease.

In a paper which was already published in Historical Materialism (Vol. 25, no. 3, 2017), the value-form theorist Geert Reuten argues that Marx’s concept of ‘production prices’ does not make sense – it is a false ‘concretization’ of value that should be abandoned (158). He argues that Marx took a wrong turn in his ‘transformation of the value of commodities into prices of production’ and that Marx’s assumption of a uniform rate of surplus value was a mistake. In Reuten’s revised model, a ‘transformation problem’ allegedly does not occur, because the rate of profit is straightforwardly determined by the organic composition of capital and the productive powers (‘potencies’) of labour (reflected in unequal rates of surplus value). This type of argument has been mooted before in Marxian econometrics, and it can be constructed in a reasonably coherent way. I do not find it very plausible myself though – I think the interpretations of Anwar Shaikh and Lefteris Tsoulfidis are much superior (and they can incorporate some of Reuten’s concerns).

I do not claim to understand much of Chris Arthur’s response to Reuten’s paper, but Arthur’s misgivings against measures of ‘labour intensity’ are I think not well-taken (if e.g. airline companies reorganize, so that the same quantity of work has to be done by fewer workers, labour intensity surely rises, and it can rise, quite independently of output levels or occupational differences).

Kenjo Mori’s fascinating paper analyses Marx’s notebooks on the 1857 crisis, which were published for the first time in the MEGA². These notebooks contain 1,500 excerpts from 12 newspapers and magazines from November 1857 to February 1858 (207). Marx made a tremendous effort to learn. He identified international linkages (this was the first global commercial crisis) and he considered both the financial sector (the collapse of confidence in the banking system) and the real economy (overproduction). He intended to explain the simultaneous economic collapse of the trade in manufactured and farm products (210f). Interestingly, Mori compares Marx’s insights to the interpretations of contemporary political economists. The ‘falling tendency of the rate of profit’ did not seem to have anything to do with it though, and Marx’s final explanation probably owed more to Ricardo’s famous chapter ‘On machinery’ (226).

Matthias Bohlender makes the case that Marx’s historical materialism, and the project for his critique of political economy, was born in 1845. It remains true that ‘we know almost nothing’ about what Marx did on his first trip to Manchester to meet up with Engels (240), but the Manchester Notebooks (a portion of which are now published in the MEGA²) do indicate a great deal about how Marx’s thought was evolving.

Lucia Pradella’s response provides a spirited critique. She argues that Bohlender’s story is not so plausible (just as there is no evidence for Althusser’s ‘epistemological break’ theory); Marx’s critique of political economy began in Kreuznach and Paris, in 1843, and the Manchester Notebooks, although they do mark a significant new stage in Marx’s evolving thoughts, should be understood within a broader sequence of events (264).

The bibliography of the book, compiled by Angela Ettema, comprises some 32 pages (about a tenth of the total text). It provides useful and pretty solid referencing to the relevant literatures. The layout and fonts used for the book are excellent. With any luck, Haymarket will publish an affordable paperback edition.

Marxology is not everyone’s cup of tea, and much of what is said in this book is not spectacularly new. Much more could be said on the topic, such as the differences in receptions of Capital in different eras. One small group of scholars obviously could not resolve all the recurrent problems of Capital at one sitting. Marxological scholarship has been a dying art since the Wende, even as a lot of new information became available. For the specialist, though, the insights of the substantive essays in this book are valuable. Overall, the book represents a modest attempt to study the thought of Marx and Engels scientifically, without treating them like deities or demons.

The main thing that stood out for me in this experience, is how guarded leading scholars (other than the likes of David Harvey, perhaps) have become these days about the meaning of Marx and Engels’s strivings, or what they could mean, in today’s world. A new, convincing ‘grand narrative’ about what can be learnt from their endeavours in the nineteenth century, and from their twentieth century followers – based on what scholars know now – has yet to be written. The challenge is there.