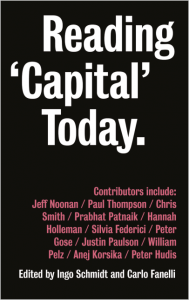 The 150th anniversary of the publication of Marx’s Capital has sparked a few new books, such as the complete translation of Althusser’s Reading Capital and David Harvey’s Capital and the Madness of Economic Reason. Pluto Publishers has also put out a new book, Reading Capital Today, a collection of essays that explore the relevance of Marx’s Capital to contemporary political struggles. The central thesis of the book is that although Capital was written in a very different historical context from today, it remains a central text for grasping the laws and tendencies of today’s capitalism. As the editors Ingo Schmidt and Carlo Fanelli state in the introduction, “one hundred years after the revolution against Capital [the Russian Revolution], the world looks much more like the one portrayed by Marx 150 years ago” (1).

While the contributors all come from very different backgrounds, they are united around the idea that socialists must study Marx’s Capital as a guide to practice. Reading Capital Today does not view Capital as a purely economic text, but one that helps socialists to understand the terrain of their political struggles, identify allies and enemies, and develop a strategy for responding to today’s socio-political conjuncture. Schmidt and Fanelli state that “reading Capital today allows us to learn from the experiences of socialists and other left activists of the past, understand how present-day capitalism came into being, and develop socialist strategies for the future” (16). To demonstrate this point, the contributors explore the different contexts in which Capital was read, such as the First International, the women’s movement, the Soviet Union, the modern ecology movement, and organised labour movements. Each contributor highlights how Marx’s Capital introduced a layer of depth and critical analysis to the concrete political situation of a multiplicity of social struggles.

Some intellectuals such as Slavoj Zizek have tried to portray Marx as someone who did not engage in actual political praxis because he spent a lot of time in the British Library writing Capital. While it is true that Marx withdrew for many years from political struggle to write Capital, William Pelz shows in “Capital and the First International” that many of Marx’s central theoretical positions arose during his involvement with the International Workingman’s Association (IWMA). Prior to writing Capital, and during its composition, Marx was actively engaged in helping to lead the IWMA, being both influenced by the political line of the IWMA and exercising a decisive theoretical influence on the organisation. Pelz points out that “Marx sounds so often like other members of the International in Capital that it is difficult to say how much the IWMA influenced him versus the other way around.” (39) He shows that the IWMA conducted field research on all economic and political questions, and that Marx composed the empirical sections of Capital using IWMA’s research data. In Pelz’s essay, we learn that members of the IWMA frequently made reference to Marx’s Capital and tried to use it to formulate political demands, such as improving the lives of female workers, and liberating black people in the United States from slavery. Pelz cites evidence that socialist feminists such as Harriet Law, a member of the IWMA, used the section of Capital on the development of machinery during speeches to criticise the oppressive conditions of women in the modern factory. This essay is of particular utility in that it articulates the ways Capital functioned as a political text, both during Marx’s own time, and with reference to the central debates of the First International. In today’s political context, Pelz’s essay shows how it is important for socialists to study Capital in order to learn how to conduct their own proletarian research and formulate a political line that bases itself on the actual material conditions.

One of the essays that elaborates on this point is “Capital and Organized Labour” by Carlo Fanelli and Jeff Noonan. They show that Capital can help strengthen the trade union movement by helping union leaders go beyond “struggles limited to the immediate conditions of work, pay, and greater market regulation—to building wider solidarities beyond the workplace with the aim of transcending social relations of servitude.” (139) Fanelli and Noonan remind us that in Capital, Marx shows how the capitalist class always seeks to maximise the rate of surplus value by getting the workers to work long hours with the maximum intensity of labour. The worker comes home exhausted, with only time to sleep and recover his energy, in order that he may go to work the next day to do it all over again. With reference to points like this, Fanelli and Noonan argue that Capital can help the working class demand more free time outside work, more democratic control of the production process, and better public services derived from the redistribution of surplus-value. They contend that this is central to the struggle for a socialist strategy because it allows workers to see through their own collective activity what they can achieve when they free themselves from capital. It can create a militant rank-and-file majority that can isolate class collaborationist union bosses and align trade unions on a class struggle basis. The political possibilities of Capital are also examined in the chapter by Prabhat Patnaik on the Labour Theory of Value, in which he shows that “a rise in the money wage rate lowers the maximum realizable profit rate” (66) This helps demonstrate that every victory in wage struggles puts the working class in a better position over the bourgeoisie. Although Patnaik’s contribution is somewhat technical, it can inform the political struggles of those involved in the Fight For 15 campaign in the United States and other wage struggles.

Marxism has exercised a decisive influence on the women’s liberation movement. Reading Capital Today includes an essay by Silvia Federici that explores the way that Marx’s Capital sparked debates about the nature of housework in the work of the Italian socialist feminist, Maria Dalla Costa. Dalla Costa argued in the seventies that housewives engage in productive labour by producing the labour-power commodity. By engaging in unwaged housework, a housewife ensures that the male worker will be able to produce surplus value for the capitalist each day by doing work that contributes to the social reproduction of labour-power. Because they help to produce the labour-power commodity without being paid a wage, Dalla Costa called upon housewives to organise unions and demand a wage from the state. Federici returns to this debate, and claims that it is helpful today for articulating the demands of the women’s liberation movement. While the essay is interesting, it is quite problematic to include it in a volume on the contemporary relevance of Capital, as the Wages for Housework movement was largely rejected by most socialist feminists in the late seventies. When the Wages for Housework movement was popular, Angela Davis pointed out in Women, Race, and Class that Dalla Costa was only analysing white women’s experiences, and that she had mistakenly universalised the position of white women. Also, Davis showed how mostly conservatives in Germany and Italy supported a wage for housework, as it would keep women confined to the home. She points out that socialist feminists should not call for a wage for housework, but the industrialisation of housework in order to liberate women from domestic labour. At the point of production, women of all nationalities can struggle against male chauvinism in order to build the unity of the whole working class and fight for socialism. The Federici essay in Reading Capital Today is a helpful guide to the Wages for Housework movement, but should be read with caution lest it repeat some of the same mistakes of previous generations.

The book also contains an exploration by Paul Thompson and Chris Smith of theories of cognitive capitalism, upheld by economists such as Paul Mason and Antonio Negri. The theory of cognitive capitalism argues that value-extraction is no longer based on labour time, but rather information and knowledge capital. These theorists claim that the working class today engages primarily in immaterial labour, which is “cerebal, affective, communicative or relational, or that which contributes to the informational or cultural content of a commodity.” (125) As a result, Marx’s theory of surplus value is no longer relevant and should be replaced with a theory of immaterial labour. Thompson and Smith reject the theory of cognitive capitalism, pointing out that these theorists do not properly understand the subordination of labour to capital, fail to provide any analysis of how capital operates in new industries, and lack an understanding of the value-form. Their critique is helpful in showing how important it is to correctly understand the nature of class struggle and the theory of surplus value developed in Capital. It is an excellent summation of the debates surrounding cognitive capitalism, the labour process, and Marxist-inspired management studies.

Reading Capital Today is not a guide-book for understanding Capital and is not recommended for someone who has not first read Capital. It would make an ideal text for a person or collective that has studied Capital and wants to explore the possibilities of its application. It introduces the reader who has studied Capital to important debates in Marxist economics, its incorporation into non-proletarian movements, and clarifies some important components of Marxist economic theory. It can help socialists to explore new ways that they might use Capital in their political struggles and the fight for socialism.